#52ancestors Post Thirty-Four: Find Descriptions of Your Irish Family's Homes in the Census

Last week's writing prompt for #52ancestors is Non-Population. This term, related to the census, does not count people as in the Population schedules but counts those items related to resources and needs. In the United States, these non-population schedules were used to identify and quantify information related to agriculture, mortality, and manufacturing.

In Ireland, the 1901 and 1911 census records include non-population information about the homes of our ancestors on the House and Building Return and the Out-Offices and Farm-Steadings Return.

James Murray was reported as the landowner of a house with 5 to 6 rooms in Ballyvelaghan on both the 1901 and 1911 House and Building Returns. The walls were made of stone, brick, or concrete. The roof was a perishable material such as wood or thatch and there were four windows in the front of the home. In 1901, there were three outbuildings; a stable, a piggery, and a barn. In 1911, there were also three outbuildings; a stable, a barn, and a cowhouse.  The home was considered a 2nd Class House.  James, Celia, Patrick, Kate, Julia, and Susan (my husband's grandmother at age 15) were living in the home in 1911.


In 1901, William Quinn was a landowner and lived in a private dwelling in Caheravoneen South, County Galway with his family; Bridget (his wife), John, Mary Anne, Margaret, William (my husband's grandfather - age 6), Peter, Celia, Bridget (Delia), and a servant Bridget Lyons.

The walls of the house were made of stone, brick, or concrete and the roof was made of a perishable material (probably thatch).  There were 2, 3, or 4 rooms and two windows in the front making this a 3rd class house. Outbuildings included a stable, a cowhouse, and a piggery.

In 1911, Bridget Quinn was the head of the household and the landowner. She lived in the same home with five children; John, William, Peter, Celia, and Delia.
This same home was described as stone, brick, or concrete with a perishable material for a roof. This time, It was said there were three windows on the front and it was deemed a 2nd class house. There were four outbuildings; a stable, barn, cowhouse, and shed.

Last year, I posted this post - The Bryan Log Cabin in Bienville Parish. I found a photo of the cabin, a two-room dogtrot, on page 59 of Louisiana Plantation Homes by W. Darrell Overdyke. In addition to seeing the cabin in this book, a sketch and description be found in the research paper Log Houses as Public Occasions: A Historical Theory written in 1977.  I won't put either on my blog as I want to avoid copyright infringement; however, I have seen the book for sale both at Amazon and eBay for reasonable prices.

I wrote the original post to share and maybe verify a story told to me by a Wimberly/Bryan descendant (my third cousin) when visiting Bienville Parish in 2007. I was told the person who owned the land (a Mrs. "C") reported someone from Louisiana State University asked for the cabin. They removed the cabin after carefully numbering each piece. However, when LSU was called, the location of the cabin was not known.

Below is what I have learned and what I want to know.

Last year while trying to verify the story, I learned that story was actually that of the George Washington Nix log cabin seen below. 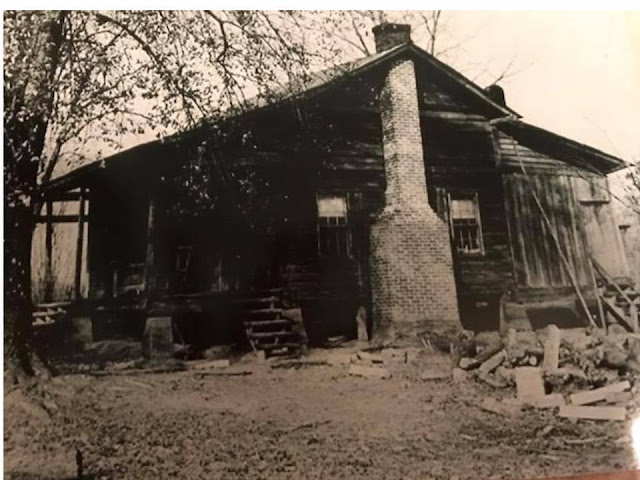 George Washington Nix built the cabin pictured and it was passed on to his daughter, Erie Ontario Nix, and her husband, Augustus Reddick Bryan (grandson of Reddick Bryan).

Could the Bryan log cabin and the Nix cabin be one in the same? There are no sources for the cabin pictured in Mr. Overdyke's book. I would love to see his research and sources. That might answer my questions.

In 1999, another Bryan descendant wrote that her parents looked for the cabin in 1978 with explicit directions from the "C" family, but the cabin was not found and assumed torn down. Could this be the "C" family who owned the Nix cabin?

In Log Houses as Public Occasions: A Historical Theory, the house was described as being built about 1850.  Reddick Bryan purchased the land where the Bryan Cemetery can be found in 1839.  Where did he build his home? Did he stay in the first house he built?

In Mr. Overdyke's book, it is written the Bryan family left Georgia and lived in Arkansas for two years prior to moving to Louisiana. I don't believe this is correct. What about the Nix family? Did they come to Louisiana from Georgia? Did they spend a few years in Arkansas? When did they settle in Bienville Parish?

I added land/family information to this map in hopes of learning more - I did not. The map below shows some land owned by Reddick Bryan and George Washington Nix. Click on the map to enlarge it or go to the actual google map at this link. 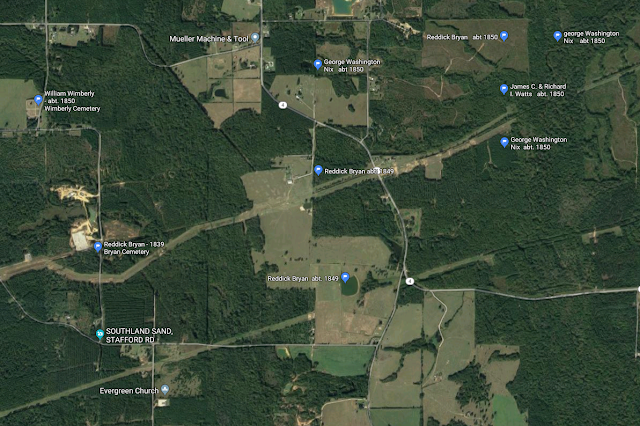 I cannot locate the house or positively determine that the house in Mr. Overdyke's book was that of Reddick Bryan, my great-great-grandfather. I am always open to suggestions and always appreciate new information! I can be contacted via email or on my Facebook page (see the link below).

Family photographs from the collection of Jane Stewart Slater.

This week's writing prompt for #52ancestors is Family Legend.  Merriam-Webster.com defines a legend as a story coming down from the past.  In my family, there are some family stories I will not / cannot write about. There are others that have been proven, some I cannot prove, and, others, I seriously doubt.

My Bryan family passed on this short list of famous people that were thought to connect to us; some Bryans and some not.

John Nance Garner was a Texas congressman and Vice President under Franklin Delano Roosevelt during his first two terms. He is not connected to my family. However, my grandfather's sister, Terrell "Bunch" Bryan married a James D. Biggs. John Nance Garner is connected to this Biggs family.

John Neely Bryan is known as the founder of Dallas, Texas. Although his last name is Bryan, I found him while researching my Hairston family. He is connected to the Hairstons only by marriage. See more at this link.

If there is a link, I doubt I will find it in my lifetime. William Jennings Bryan was born in Marion County, Illinois in 1860 and his father (Silas Bryan) born in Culpepper, Virginia in 1822. Silas Bryan's father was John; also of Culpepper.  My Bryan family was in North Carolina at this time. My Reddick Bryan was probably the same age as John of Culpepper. If there is a link it would be many, many generations beyond the unproven father of my Reddick Bryan.

Daniel Boone's wife was Rebecca Bryan; born before 1740 in Virginia. If there is any connection at all to my Bryan family it would again need to be many, many generations beyond the unproven father of Reddick Bryan.

James Stephen Hogg was governor of Texas from January 20, 1891 to January 15, 1895. My father mentioned several times that Governor Hogg was family. I found a connection when I was researching Hairstons and learned he is probably very distantly related. See more at this link.

Terrell Bryan and Harriet Louisa Albritton were married on February 20, 1855 in Bienville Parish, LA.   Terrell, the son of Reddick and Elizabeth Regan Bryan, was born in Georgia (probably Houston County) on November 17, 1836.  Harriet, the daughter of Peter and Hollon Albritton, was born in Twiggs County, Georgia on August 15, 1836.

Terrell farmed in Louisiana until the Civil War.  He was a private in the "Castor Guards," part of the 16th Louisiana Infantry.  Terrell was wounded at Shiloh and at Missionary Ridge.  During the war, Harriet and her children lived at the home of Harriet's mother in Louisiana.  By 1877, Terrell and his family were living in Eastland County, Texas. They moved to Erath County in 1878 or 1879.

In Erath County, he did some farming, served as Justice of the Peace for a few terms, managed the Poor Farm, opened a wagon yard, and even tried selling books. He attended the Methodist Church and was active in local politics, the Masons, and Woodmen of the World.

I have written many posts about Terrell and Harriet. Here are just a few. 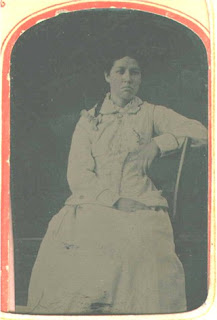 
These blog posts have additional information about Hollon and her family.

Read these blog posts for more information about Redic and his family.

Read these blog posts for additional information about Dollie and her family.

These blog posts contain additional information about Laura and her family.

Family photographs and documents from the collection of Sue Pierce and Pat Waas. Accessed 2006. Used with permission.

Friday's Photo: A Revisit to the Chapel

Early in June, I posted  #52ancestors Post Twenty-Three: Going to the Chapel. This is a collection of wedding photos that belonged to my husband's parents, Doris Staubach and William Quinn. I suspect most of the weddings occurred in New York in the 1950s. In my post, I was asking for clues to the identities or familial relationships the brides or grooms may have had with my husband's family.

In this post, photos #1 and #3 are now correctly identified. I would love to add last names and family connections to the remaining photos.

If you know the identity of these brides and/or grooms OR know of any connection they may have to family, please contact me via email or leave a message on my Facebook page. 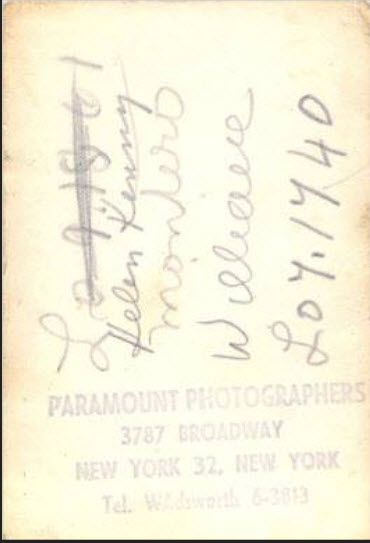 Family photographs and documents from the collection of  Diana Bryan Quinn.
Posted by Diana at 5:37 PM 0 comments