Friday's Photo: A Wedding and A Coverlet in this Bienville Parish Collection 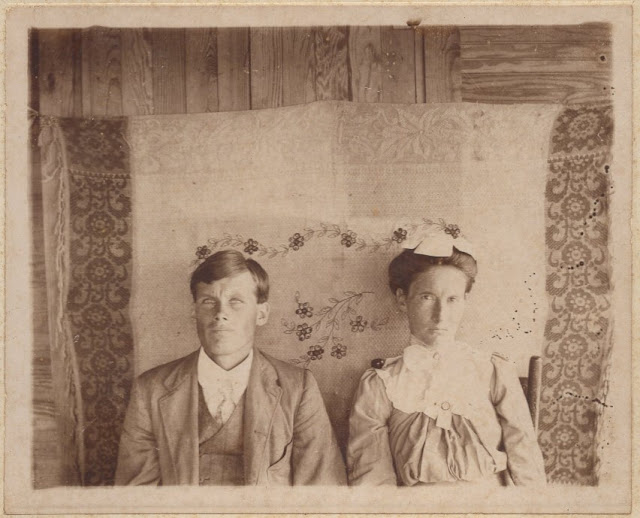 This is another photo from the collection of Marguerite Cook Clark. The identity of the couple is unknown. It appears to be a wedding photo with an embroidered coverlet as a backdrop of the photo. Is this your family? 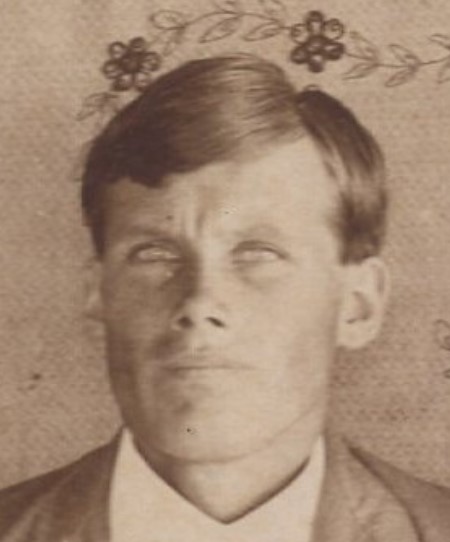 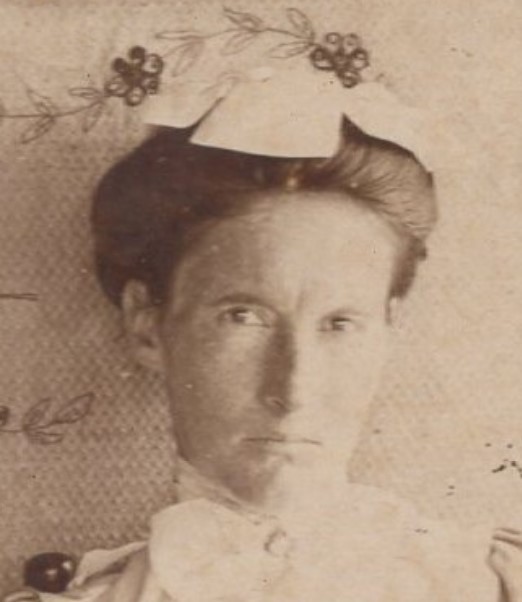 The Moses S. Thompson Family: From Tennessee to Arkansas to Texas


Moses S. Thompson is not directly related to me, but I searched for him to find more clues about my Hairston family. This is a good practice known as cluster or collateral genealogy. If you've lost hope of finding your ancestor, research those related to him in some way - siblings, neighbors, cousins, in-laws, witnesses on deeds, and any other associates.


John A. Thompson, a son of Moses S. Thompson married Martha Elizabeth Hairston Chisum, my great-grandfather's sister. While I didn't find any wall-breaking information while searching for this family, I did find new information and new family.  Thompson family information has been on my website for at least 15 years, so I hoped it has helped others looking for this family. As my website is old, harder to find, AND needs updating, I am posting the Moses S. Thompson notes, along with updates, to this blog.

I have written about many of the Thompson family members and have included links to these posts throughout this post.


Census Records for the Moses S. Thompson family show they lived in Henry County, Tennessee in 1850. All family members were born in Tennessee except Moses who, along with his parents, was born in North Carolina.  Moses, his wife, and six children are shown below.  Note the census record indicates age, gender, occupation, and place of birth.

The family was living in the Griffith Township of Conway County, Arkansas in 1860 and Ellen, a four-year-old daughter, was the only change in the structure of the family.

The family looks much different on the 1870 census. Sarah was married and no longer living at home. Martha may have died - the date and place are not known. William Thompson is no longer living with the family and Ellen, age four in 1860, must be the 14-year-old Margaret E.


In 1880, Moses Thompson was found on the census in Somerville, Texas along with his daughter Margaret and her family. Lucille, John, and Robert were found in Erath County, Texas. Note this census record indicates relationship to the head of the household, marital status, gender, race, age, place of birth, and occupation. More information can be found by looking at the actual census records. For more information about these records and free resources, go to U.S. Census Records.

Although this 1880 record indicates that both John and Robert were born in Arkansas, earlier census records indicate that they were actually born in Tennessee.

Summaries of what I know about these Thompson family members can be found below.

Census records indicate that Moses Thompson was born in North Carolina. He was married to Martha Warnick who was born in Tennessee. It is assumed that Martha died prior to 1870 as she is not listed on that census. A Moses S. Thompson fought for the Confederate Army in the 48th Tennessee Infantry, however, it is not known if this is the same Moses S. Thompson. In 1880, Moses Thompson was living with his youngest daughter, Margaret and her husband Sam Anderson in Somerville County. He died in 1890 and is buried in Bethel Cemetery in Erath County, Texas.

Martha Warnick was born January 5, 1811 in Rutherford County, Tennessee. She died between 1860 and 1870 in Arkansas or Texas.  She married Moses S. Thompson on July 6, 1839 in Henry County, Tennessee. Martha's parents were Lucinda or Lucy Griffin and John Warnick.

John Thompson married his wife, Mary A. Lowery in 1878. It is unknown when she died. The census reports a daughter named, Mollie. Descendants of John Thompson's sons remembered that their father had a half-sister, Mahaley. She married W.B. Smith in Erath County.  On August 28, 1884,  John A. Thompson married Martha "Mattie" Elizabeth Hairston Chisum in Erath County, Texas.  John and Mattie had five children; Floyd William, Aaron Whitney, Edgar Richard, Jessie Mae, and Claud Clarence. Mattie also had three children from her previous marriage; Walter, Philip, and Stella Chisum. They lived in the Bethel community of Erath County where John died following a wagon accident that occurred while he was building a new home. 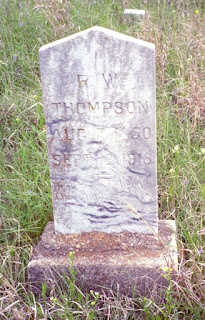 Robert Thompson married Sarah Elkins. They had two children; Leroy who was born in 1880 and Agness who died as an infant in 1895.  Sarah also died in 1895. After Sarah's death, Leroy lived with his Elkins grandparents. I have not yet found Robert in any later census records. He died in 1918. Robert, Sarah, and Agness are all buried in Bethel Cemetery.


I am assuming that Margaret E. Thompson is Margaret Ellen Thompson, the youngest Thompson sibling. She can be found in 1880 living with her husband Sam Anderson and her father Moses Thompson in Somerville County, Texas. In 1900, Margaret was living with her husband and children in Hood County, Texas. Her birthday was listed as June 1856. She and Sam had been married 21 years and had seven children. Six children were living. The children listed on the census were Nina, Byrom, Chula, Samualla, Harris, and Gella. In 1910, Margaret was a widow and was living in Pittsburg County, Oklahoma. She lived with her children Horace and Gella as well as her married daughter, Samuella Spaulling and family.

In 1880, Lucinda Thompson Newton and her husband Tom were living in Erath County. Tom was a farmer and reported he and both of his parents were born in England. They were living with their two young daughters listed as E.H. Newton and M. E. Newton.  In 1900, Thomas and Lucinda Newton were living in Palo Pinto County with their sixteen-year-old twins, Joe and Mary. Tom died on July 19, 1902. In 1910, Lucinda was a widow and living with daughter, Mary, and son-in-law, John Dalton. Sons, Thomas and James were coal miners. Thomas had a wife, Ellen, and James' wife was Cleo.  In 1920, Lucinda was found living in Erath County with her daughter, Eliza, and son-in-law, Mace P. Oyler. Her daughter Emma lived nearby with her husband, Will Oyler. Lucinda died on July 13, 1921. Lucinda and Tom Newton are buried in Old Gordon Cemetery in Palo Pinto County. 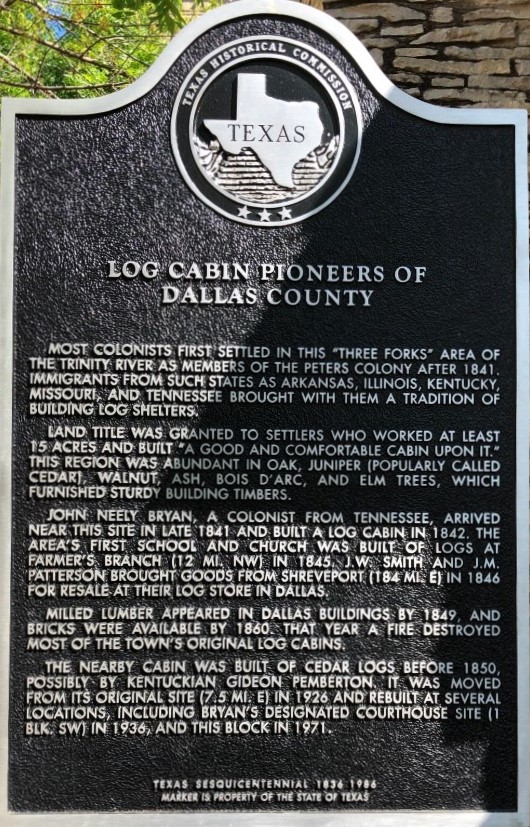 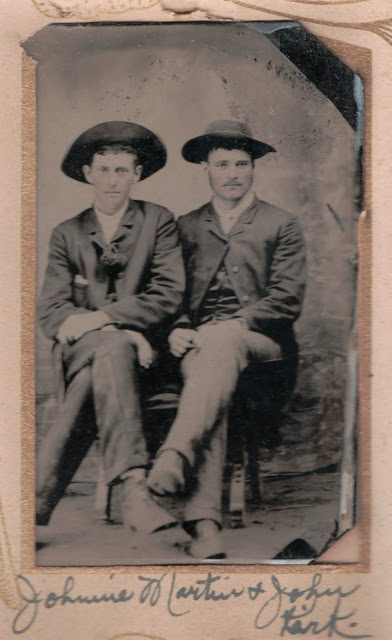 Johnnie Martin is John Joseph Martin of Bienville Parish, Louisiana. He is the son of Laura Frances Bryan and Thomas Jefferson Martin. You can see much more about him by clicking here.

I suspect that John Kirk is actually John W. Kirkpatrick born in 1870. Can anyone verify this?

The young men were about the same age as Johnnie Martin was born in 1869. Both boys spent their youth in the same area of Bienville Parish. It appears Johnnie and John are in their late teens or very early twenties in this photo which would give it a date of about 1890.

From the Files of Marguerite Cook Clark: John Joseph Martin of Bienville Parish 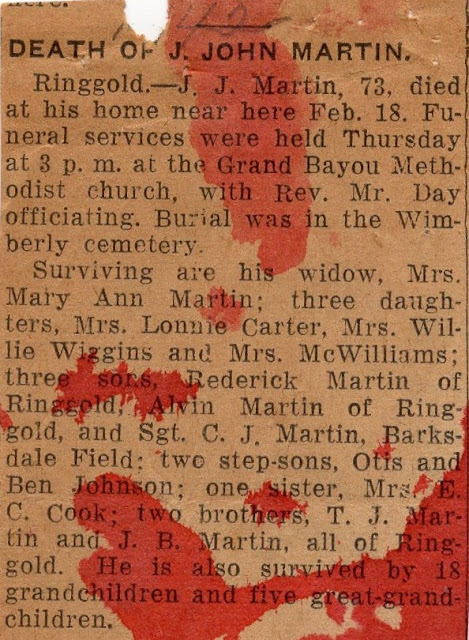