This photo of Mary Ann Quinn and husband, Lawrence D. Meaney, was passed on to me by their daughter, Mary Margaret Weber, in 2007. Mary Ann Quinn was a sister of my husband's grandfather. Today, the following marriage announcement was found at Newspapers.com.

According to the announcement, they were married on a Wednesday in April of 1919. This would probably have been April 30, 1919 at St. Louis Bertrand's church in Louisville, Kentucky. I was told that Mary Ann and Lawrence were the couple on the right. Mary Weber thought the other man was a McTighe and the woman, Ms. Keaney. However, in the clipping, William B. Meaney and Catherine Keaney were the attendants. Mary Weber wrote that Catherine Keaney was a cousin and according to this marriage announcement, the reception was held at the home of the bride's cousin, Mayme Keaney.

So, how were the Keaney's related to the Quinns? Do they have a connection to the Dwyer family? Mrs. Dwyer was listed as an Aunt on Mary Ann Quinn's ship record. Mrs. Dwyer lived in Indiana and paid for Mary Ann's passage.

You can learn more about Mary Ann Quinn and Lawrence Meany by visiting my Quinn/Murray web pages. Click here.

Family photographs and documents from the collection of Mary Margaret Meaney Weber. 2007. Kentucky. Used with permission. 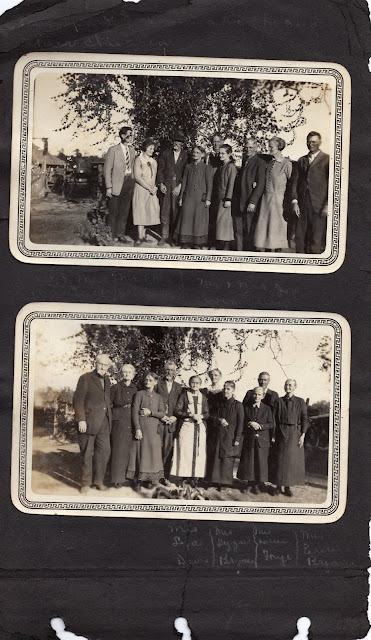 My Bryan family ancestors took quite a few photographs and they can be found all over the United States. On Sunday, I posted a photo of Joe and Josie Cook along with an article about their golden anniversary celebration. These were found in Marguerite Cook Clark's collection. Fourteen hundred miles away from Marguerite Cook Clark's collection is the Frye Family collection where photos of those who attended the celebration can be found.

I was able to identify the family in these photos with the help of a few readable labels in the photo album and by looking at other identified photos. However, there could be an error in the identification of the women. If you find a mistake, please contact me or leave a comment on my blog.

From the Files of Marguerite Cook Clark: Joe and Josie Bryan Cook

The article to the left states they were celebrating their 52nd anniversary. This would make the date of the celebration November 22, 1925. However, note the number 52nd is written over. Enlarged, the writing is not clear and the clipping is not dated, but we can guess this is at least their 50th.

These photos of Hattie Frye and William Evans were shared by a Bryan cousin who also descends from the Frye family tree.


Hattie Frye was the daughter of James M. Frye and Josephine "Josie" Hayes. She was the 7th of nine children. According to Pubic Member Trees at Ancestry.com, she and William "Bill" Evans had eight children. It is suspected the child in the photo is their first, Eunice Ethel Evans.

Family photographs and documents from the Frye Family collection. Accessed June 6, 2016. Used with permission.
Posted by Diana at 11:21 PM 0 comments 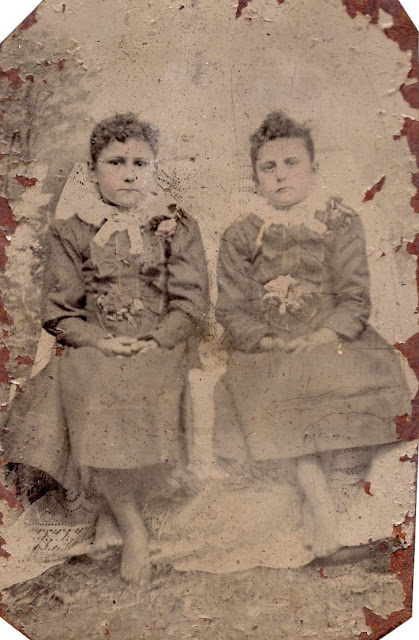 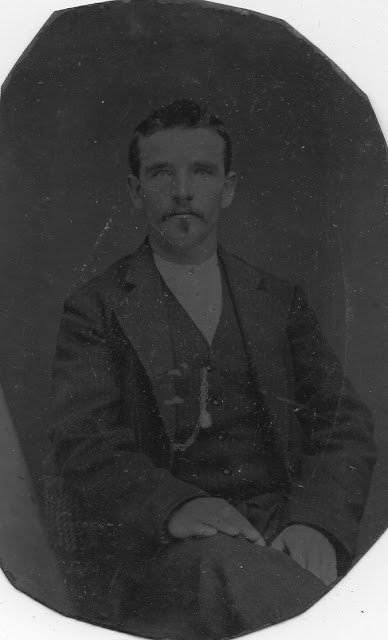 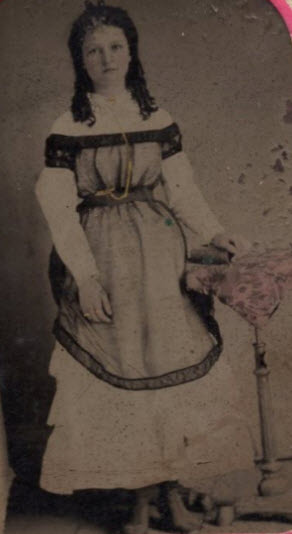 My distant California cousins shared these tintypes with me. All are unlabeled and persons pictured are unknown. Our Louisiana families lived in Bienville Parish and counties nearby. Family names include Bryan, Wimberly, Trott, Hammett, Albritton, Pitman, Frye, Cook, and Watts.

Family photographs and documents from the Frye Family collection. Accessed June 6, 2016. Used with permission.
Posted by Diana at 9:16 PM 0 comments

The Other Reddick Bryans

There are two men from North Carolina who are often confused with my great-great-grandfather, Reddick Bryan, in online family trees. The title to my post is a little deceiving as these men weren't actually named Reddick Bryan.

Redick O'Bryan was said to have come from Chatham County in North Carolina and by 1815, when married to Elizabeth Bourland, he was living in Hopkins County, Kentucky. His parents were said to be Thomas O'Bryan and Sylvania Frances Copeland. Both born about 1760 and said to be from Chatham County. Redick O'Bryan died and was buried in Hopkins County, Kentucky in 1879.

Riddick Bryan of Northhampton County, North Carolina is sometimes seen as Reddick Bryan, but most documents indicate it was Riddick. He was born about 1810 and can be found living in Northampton County until his death sometime around 1888.  He married Charity Bryan in 1833 and Sarah Bryan in 1864.

Although I cannot find any documents connecting these three men, it does not mean they were not connected. Very little can be found about my great-grandfather while he lived in North Carolina. From deed records, I know he lived in Martin County before moving to Georgia.  However, I have found no other information as many records were lost in two Martin County Courthouse fires prior to 1900.