This picture belonged to my mother-in-law, Doris. On the back was written

Helen and Bertha Driscoll, were born in Cohoes, NY.  They were two of 14 brothers and sisters.  Their father, John, was born in Ireland. He was the son of Simon and Mary Driscoll. Born in New York, their mother, Mary McTighe, was the daughter of Thomas McTighe and Mary Golden.

By 1900, only eight of the 14 children were living. Most family members spent some time working in textile mills. Two of the boys, James and Patrick, were in the United States Army in the very early 1900s, but cannot be found after that time. Helen and Bertha moved to New York City in the 1920s. Helen married Charles Staubach and Bertha married Michael Caccovo.

Please contact me if you have more information about this Driscoll family from Cohoes.

I posted the following on The Budget SLP, a blog for speech-language pathologists, but knew that those researching family might also benefit from this as well.

Last spring, my computer desktops (both home and work) were covered with icons. I had tried organizing by putting selected items in certain areas, but that never lasted very long. A Pretty Organized Desktop at iheart organizing inspired me to research other organized desktops.

After finding great ideas and suggestions at JenniferKeegin Dot Com and The Ney Life, I created the following desktop wallpapers; the first for my work computer and the second for my home computer. 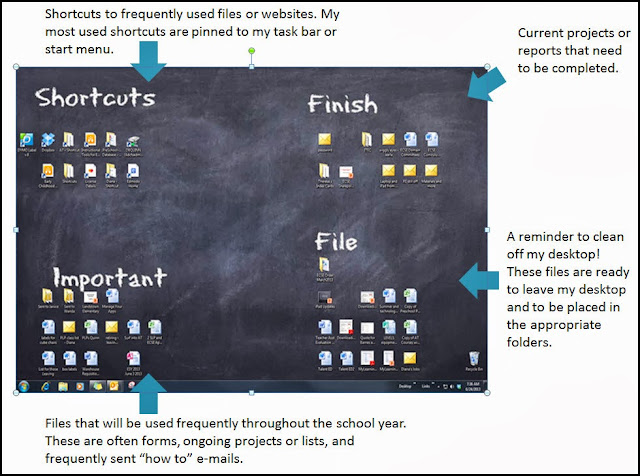 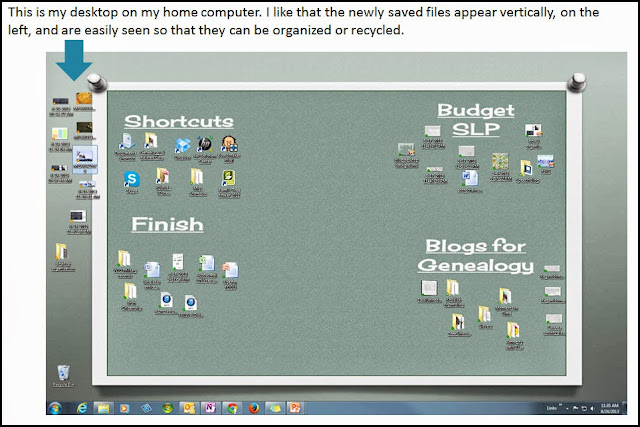 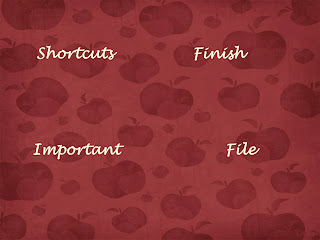 To create your own organized desktop using Microsoft PowerPoint

* These instructions were written for those using a computer with Windows 7. On computers running other versions of Windows or on Apple computers, follow the instructions for personalizing your computer's wallpaper.

If you are using two monitors or a have added a second monitor to your laptop, the new desktop screen will show exactly the same on both monitors (Unless you have Windows 8).

I didn't want to see a second set of labels so covered the second set with the Sticky Notes found on Microsoft Windows 7.  I love having my "To Do list," blog ideas, and other important things to remember on my desktop!

This system has kept my desktops organized for almost four months. However, I do have one important warning. Items on your desktop can be easily lost if your computer crashes. As with all files, make sure that you back-up frequently! 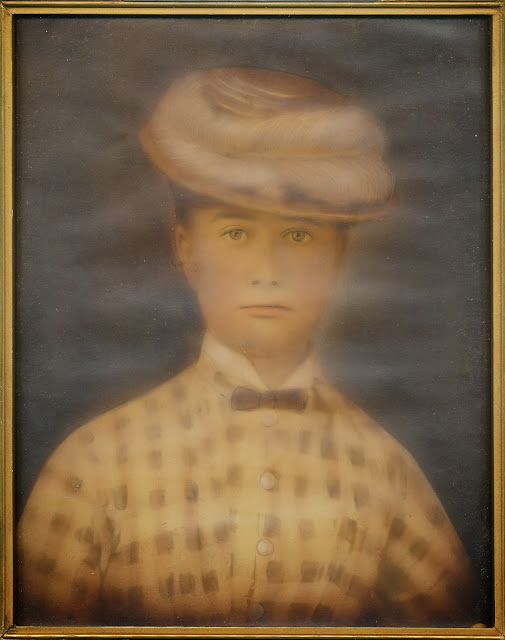 Mary Lucy Glynn, my great-grandmother, was the mother of my Grandmother, Edith Giddens Davis. Lucy was born in Vermont in 1865. Her parents were Joseph Albert Glynn and Julia Harvey. By 1870, her family was living on Staten Island and in 1880, Lucy was working as a servant for family in Totenville on Staten Island. Lucy met Charles Giddens when he delivered milk to a home where she was working. They married on March 31, 1891 in Manhattan. Lucy and Charles lived in Crewe, Virginia for a few years and eventually settled in Phillipsburg, New Jersey. Lucy died at age 61 in Phillipsburg.

Bertha M. Davis was my great-grandmother. She was the mother of my grandfather, Claude Davis.

Bertha, born on May 29, 1879, was the daughter of Olive Caroline Davis. Her father is unknown. Her mother's parents were Seth H. Davis and Margaret "Peggy" Jones of Edmonson County, Kentucky. It is assumed that Bertha was born in Edmonson County.

According to the 1880 census of Edmonson County, Bertha had a brother, Virgia (possibly Virgil).  The family was living with a Sanders family where Olive worked as a housekeeper. Bertha's sister, Dora, who married a Tom Page, was born in 1882.

Bertha married George Cooksey on January 22, 1902 in Barren County, Kentucky and in 1910 she was listed as a boarder living in the home of William and Rebecca Hawkins of Jefferson County, Kentucky. Her marital status was widow and she was working as a wrapper in a tobacco factory.

On July 25, 1910, in Jefferson County,  Bertha married Frank Hawkins, brother to William Hawkins. Frank was a widower and had a three year old child, Carrie, at the time of their marriage.  Bertha and Frank resided in Elizabethtown in Hardin County, Kentucky for at least 45 years.

Bertha was married to Frank until her death on December 28, 1965.   Frank died in 1977.  They are buried in the Elizabethtown City Cemetery.

There are a lot of unknown facts about my Davis family. Bertha was 14 years old and unmarried when my grandfather was born in 1893. Both my grandfather's mother's father and his father are unknown.

Look for more posts about this family. If you haven't "liked" my newest Facebook page, please do so as notices about Davis family posts will come from my Moments in Time Facebook page.

I have a calendar made with my Family Tree Maker software and it shows all birthdays, deaths, and marriages in my family tree.  I am sharing this week's vital statistics. You will find more about that person by clicking on the links. If you like this post and want to see more like it, let me know.

Harriet Louisa Albritton Bryan, my great-grandmother, was born 177 years ago on August 15th. 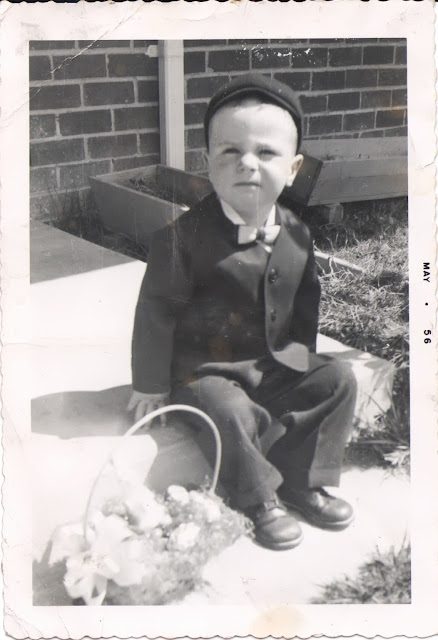 Just want to wish my wonderful husband a happy birthday! Hard to believe that you will be 60!!!

My mother and her sister will be together this weekend. This photo was taken in the 1930s in New York.