Yesterday was a quiet Thanksgiving at my home. Several of the regulars were missing. Mom, a key player in our Thanksgiving feasts, was one of those missing as she is recovering from a major surgical procedure.

I am so thankful for my wonderful mother and thankful that she is recovering beautifully. I look forward to our feast on Christmas Eve when she will again be a key player!

Today is Veterans Day, a day that we honor our veterans. Veterans Day, originally Armistice Day,  began after WWI to honor those who fought in "The Great War." In 1954, November 11th became Veterans Day, an official United States holiday, honoring all armed service veterans.

Today, I am posting a list veterans from the various branches of my family tree; many who did not serve in traditional U. S. armed forces. Most served during wars and some volunteered while others did not.  I add to this list as I find more ancestors and post the list every year. If you know of others, please comment below or send me an e-mail.


*I didn't know if I should include my ancestors who fought in the Confederate States Army, but found the following at the Sons of the Confederacy website:

"First, and most significant is the fact that by Public Law 85-425, May 23, 1958 (H.R. 358) 72 Statute 133 states –“(3) (e) for the purpose of this section, and section 433, the term ‘veteran’includes a person who served in the military or naval forces of the Confederate States of America during the Civil War, and the term ‘active, military or naval service’ includes active service in such forces.”

"As a result of this law the last surviving Confederate Veteran received a U.S. Military pension until his death in 1959, and from that day until present, descendants of Confederate veterans have been able to receive military monuments to place on graves from the Veteran’s Administration for their ancestors. A Confederate Veteran should therefore be treated with the same honor and dignity of any other American veteran."

To many, this above tintype copy has been known as James Bryan, born to Reddick Bryan and his first wife in 1815.  I was very pleased to know that I had a photo of James as a young man.  This copy was sent to me by distant cousin and labeled “Jim Bryan, Aunt Josie Cook's adopted father.”  James and his wife, Alice Mary Wimberly, did not have any children of their own, but adopted two of the children of Joseph Bryan and Sarah Margaret Wimberly.


When I sent this to Maureen Taylor, photo expert, to compare with the men in a Civil War picture, she stated that due to the clothing style, the tintype was taken in the late 1860s or sometime in the 1870s; the man looked much too young to have been born in 1815.

During my second visit to see Marguerite Cook Clark's collection, I looked specifically for this photo and found the photo below. 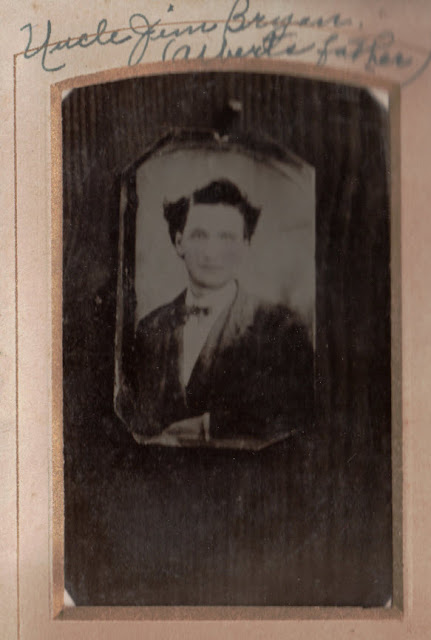 So, who was Uncle Jim? And, what about Albert? Marguerite Cook Clark's collection contained a photo of Albert Bryan. According to The Wimberly Family History, James Anderson Bryan and his wife, Sarah Frances Nix, were the parents of Albert Brown Bryan.  They lived in Bienville Parish and James was a son of Joseph Bryan and Sarah Margaret Wimberly. James Anderson Bryan would have been 20 years old in 1878 and could easily be the person in the above picture.

Albert was only two years old when his parents died of influenza. His only sibling died - unnamed as an infant. Albert was raised by James' brother, Augustus Reddick Bryan, and his wife, Erie Ontario Nix.

This, as most other photos in the collection, were labeled by Marguerite's mother, Maggie Martin Cook. As she was just a year younger than Albert, she wouldn't have known her Uncle Jim Bryan, but definitely knew her cousin, Albert, and his adopted family.

Photographs from the the collection of Mary Smith. Accessed December 2004. Used with permission.