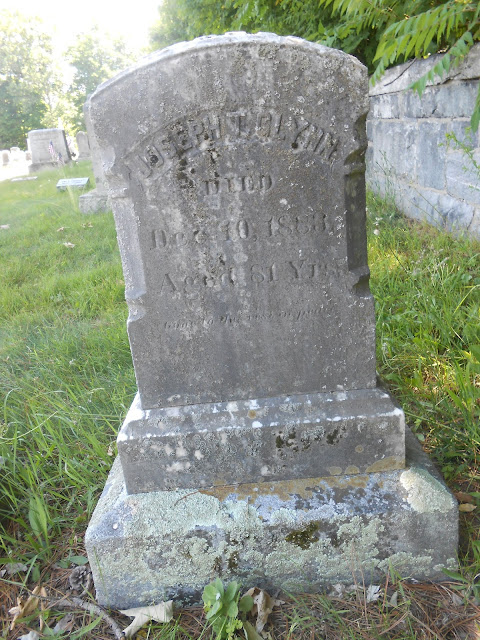 I am a descendant of Joseph from my mother's Giddens/Glynn family, this is how he is connected to me.


Joseph T. Glynn, as seen on numerous records, was the son of a Joseph Glynn. Spelling variations for Glynn were seen as Glinn, Glenne, Glinne, and Glen.  The T may stand for Truman as there are a few instances where Truman is mentioned. Joseph T. Glynn's mother is probably Jamima Miles who married a Joseph Glenne on October 27, 1796 in Putney, Windham County, Vermont.

Joseph T. Glynn was born about 1800 in Dummerston, Windham County.  He married Nancy Reed (also seen as Read), daughter of Hulda Pratt and Benjamin Reed, on January 19, 1829. Elisha Anderson, minister of the Congregational Church married them in Putney.

Joseph and Nancy had children Henry Reed Glynn, Caroline Almira Glynn, and Joseph Albert Glynn.  Joseph and his family are not found in the 1830 census; however, the birth records of all three children place him in Putney between 1829 and 1835.

In 1840, Joseph and his family were recorded on the census as living in Putney. There were six household members - Joseph, Nancy, three children and one female between the age of 80 and 90. This person is presumed to be Hulda Pratt Reed, mother of Nancy.

Joseph's occupation was written as laborer on the 1850 census of Putney.
Daughter, Caroline died on August 6, 1852 and Joseph's wife, Nancy, died on April 2, 1854.  They are buried in the Maple Grove Cemetery in Putney.

Joseph married Betsy Morey on August 2, 1856 in Lee, Massachusetts. The marriage record showed it to be Joseph's 2nd marriage and Betsy's 4th marriage. Joseph's occupation was papermaker.  I don't know if the marriage lasted very long as the following news article was found in 1857.

In 1870, Joseph was not working and living with his son, Henry, in Monson, Massachusetts. Henry was a wagon maker, owned his own home, and was married to Anna Giddings from Prince Edward Island.

Joseph was living with son, Henry, in Monson and described as disabled and as having rheumatism on the 1880 census.

Joseph T. Glynn died on December 10, 1883, in Monson, two days after the death of his son, Henry. Joseph's cause of death was written as "old citizen." 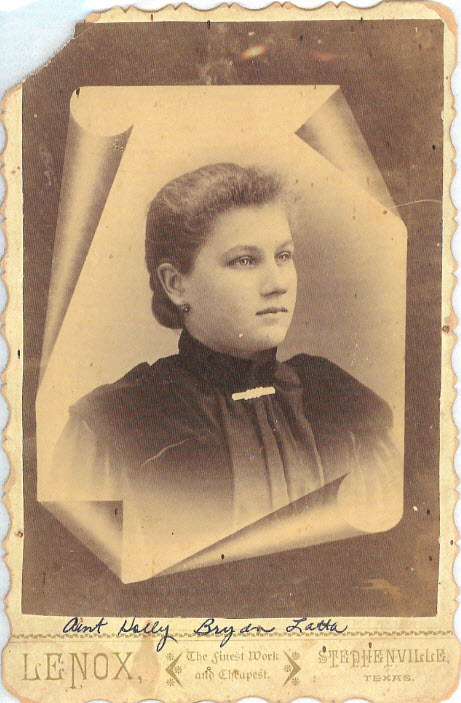 Hollon "Holly" Bryan Latta, daughter of Terrell Bryan and Harriet Albritton, was my grandfather's older sister. She was born in Bienville Parish, Louisiana on August 24, 1865. She was married to James Alonzo Latta on September 04, 1881 - just a few years after arriving in Erath County with her family. 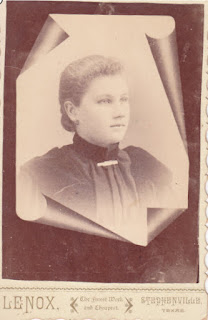 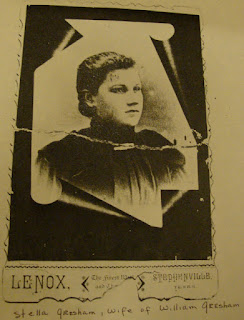 Holly looks very much like my grandfather and other family members. This photo is one of three copies I have collected from descendants of Bryan family. The one on the right was incorrectly identified as Stella Gresham, a Hairston family member.

Holly and James "Lon" Latta had one daughter, Millard Ray Latta in 1896. More about Holly can be seen by clicking here.

Photos and more about Millard Ray can be seen by clicking here.

This week's writing prompt for #52ancestors is Going to the Chapel. So, I thought I'd post a collection of wedding photos that belonged to my husband's parents, Doris Staubach and William Quinn. I suspect most of the weddings occurred in New York in the 1950s. If anyone has clues as to the identity of these brides and/or grooms OR knows of any connection they may have to family, please contact me via email or leave a message on my Facebook page.

Family photographs and documents from the collection of  Diana Bryan Quinn.
Posted by Diana at 9:25 AM 0 comments

#52ancestors Post Twenty-Two: Kathryn Keith - Why was she so far from family? 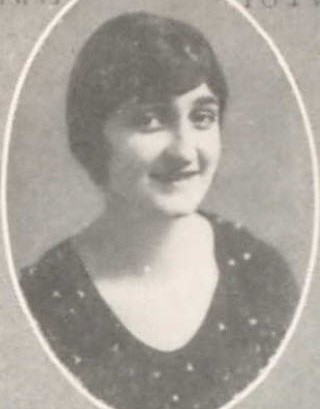 Eddye Kathryn Keith was my father's first cousin. I don't believe they met. However, it is very likely my father's older sisters knew her when they were children.

According to writing found on a baby photo, her name was Eddye Kathryn. She was born January 21, 1902 and was the second of three children born to Laura Louise Bryan and William Harve Keith.  The first daughter, unnamed, was born and died in 1900. Kathyrn's younger sister, Laura Louise was born in 1905.

Kathryn's mother, Laura Louise Bryan Keith, was the daughter of Terrell Bryan and Harriet Albritton and, my grandfather's youngest sister. She passed away from complications related to typhoid in 1908.

Kathryn played the piano and was an accomplished vocalist. As early as age 11, mention of her singing with a local music club was found in Erath County newspapers. Later she sang at church programs and at weddings.

Kathryn was attending John Tarleton Agricultural College in 1921 and 1922. She was a member of the J. T. Actors' Club and on the yearbook staff where her job title was "kodak." I assume this had something to do with photography.

Kathryn married Wayne Merrill Chandler on June 21, 1922, at the Keith home. A wonderful description of the wedding can be seen by clicking on this link to The Portal to Texas History.

According to information at Find A Grave, Kathryn died on June 12, 1925 and is buried in West End Cemetery. It is reported she died in Colorado.

The writing prompt for this week's #52ancestors is So Far Away. I immediately thought of Kathryn Keith as I had always wondered why she died so far away from family. However, as a good researcher, I need to determine if this information is correct.  I hope there will be more to this story.

This is the earliest photo I have of my grandfather, Claude Lewis Davis. He was born in City Hospital in Louisville, Kentucky on September 28, 1893. He had a complicated childhood. His mother was very young and his father is not known.

His mother, Bertha Davis, was born in Edmonson County, Kentucky. She was the daughter of Olive Caroline Davis and the granddaughter of Seth H. Davis and Margaret "Peggy" Jones.

As a young child, it doesn't appear he lived with his mother as he was found as Claude D. Smith on the 1900 census living as the adopted son of Isaac Jefferson Smith and Nancy J. Sanders Smith in Coldbrook, Warren County, Illinois.

Isaac and Nancy were both from Edmonson County. Nancy, age 30 in 1900, was the daughter of Benjamin Sanders and Mary J. Smith Sanders. Isaac, a 32-year-old day laborer, was the son of John Smith and Celia Whittle Smith.  Isaac and Nancy were married in Edmonson County in 1890. On the 1900 census record, it was reported Nancy had given birth to one child who had died.

In November 1905, C. L. Smith was presented with a book "from a friend" and in it was written, C. L. Smith Elko, KY.  Claude would have been 12 years old. This book, on my bookshelf, is only one of a few pieces of evidence showing my grandfather's surname as Smith. 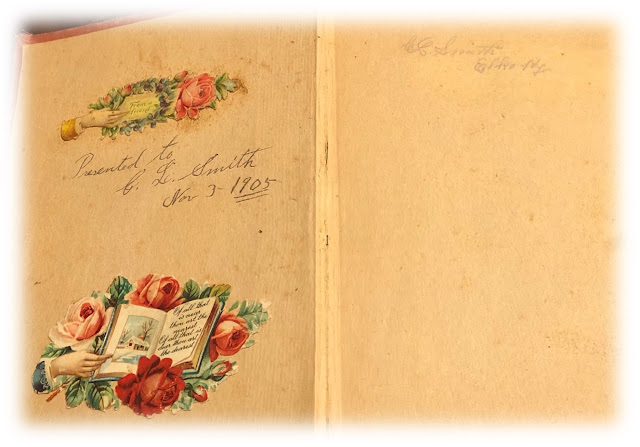 In 1910, Isaac and Nancy were living in the Parker community in Edmonson County along with a four-year-old son, Walter. A 16-year-old Claude Smith lived nearby as a lodger with the Robert Page family.  At the time of the census, Claude's mother was Bertha Cooksey, a widow living in Louisville. A few months later she married Frank Hawkins.

Little else is known about my grandfather's childhood. Did he know his birth mother as a child? When did he decide to use the name Davis instead of Smith? It is said he joined the Navy soon after his mother remarried. Did he go in as Smith or Davis?

Family photographs and documents from the collection of Diana Bryan Quinn
Posted by Diana at 9:48 PM 0 comments