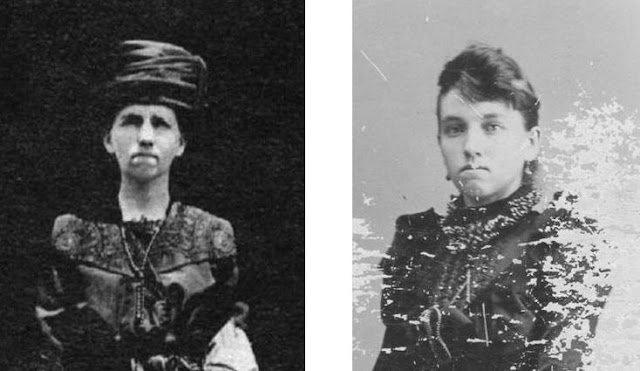 A few weeks ago, I posted the picture on the top left.  It had never been labeled and until recently comparing it with other family pictures, I always thought that it was a family friend. After comparing pictures, I decided that it might be Dorothy Elizabeth Harriet Bryan Wylie, my grandfather's sister.  Maureen Taylor, the Photo Detective, dated the black clothing in this picture at about 1912.  Well, Dollie's husband, Tom Wylie died in 1911.  Could this picture be Dollie Wylie on the day of her husband's funeral?

The picture above, on the right, is Dollie Wylie.  It was sent to me by Jane A., a granddaughter of Dollie. It is said to be on Dollie and Tom's wedding day; July 27, 1889.

Some of you thought that my picture (on the left) was Dollie and others did not. Now what do you think?