This photo of Nigella McCarty was in a box of photos that belonged to my Dad's family. Her name is written on the photo so there was no problem identifying her, but no connection was found between families or family locations.

Her father Joseph David McCarty was born in Erath County in 1867 so there is a chance that he knew my grandfather Redic Eli Bryan, born in 1870 and living in Erath by 1877.

However, today I found a more likely connection. Both my Aunt DeRay Bryan and Nigella McCarty attended Simmons College (now Hardin-Simmons University)  from 1920 to 1921.

I Found the Bell Tower AND it is NOT in Texas! 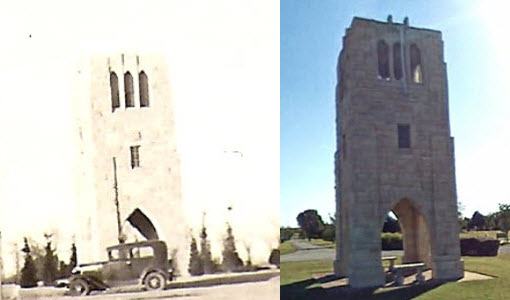 On Friday, I posted the two photos seen below. I have been looking for the bell tower and the identity of those women for 18+ years. 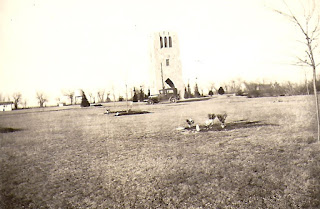 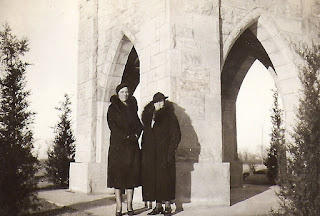 Years ago, I searched for this cemetery in Texas; visiting cemeteries, writing to other genealogists in counties where my families lived, and posting these photos on a variety of websites.  All with no success.

Hours before posting these photos on Friday, I searched Newspapers.com and GenealogyBank for old newspapers mentioning a bell tower in a cemetery. I did a Google image search and checked the Texas History Portal. Again, no success!

Dad's sister, DeRay Bryan, didn't marry, but a large number of her photos were DeRay and a man, Chris Wieland. Most were taken in or near Borger, Texas.

A quick search for Chris Wieland, came up with a wife (Mildred) on the 1930 census in Borger and his full name, Chris Boss Wieland, on his WWI draft registration in Kay, Oklahoma. Both documents indicated that he worked as a mechanic in a garage. At Ancestry.com, I found he had a large number of siblings and that his parents resided in at least three states during their marriage; Kansas, Oklahoma, and California. Chris' brother, Leonard J. Wieland, owned a garage in Borger.

At Find A Grave, I found Chris Wieland's grave in Cowley County, Kansas. He died December 22, 1935. Very surprised at his death date, I searched several genealogy sites for information about his death with no success.  I went back to Find - A - Grave, but didn't see any additional information and just as as I was ready to close the site, I noticed the bell tower.

The photos were taken at Chris Wieland's funeral in Kansas! The women in the photo are most likely Wieland family or friends. Another photo mystery solved!

Friday's Photo: Another look at a Cemetery Photo 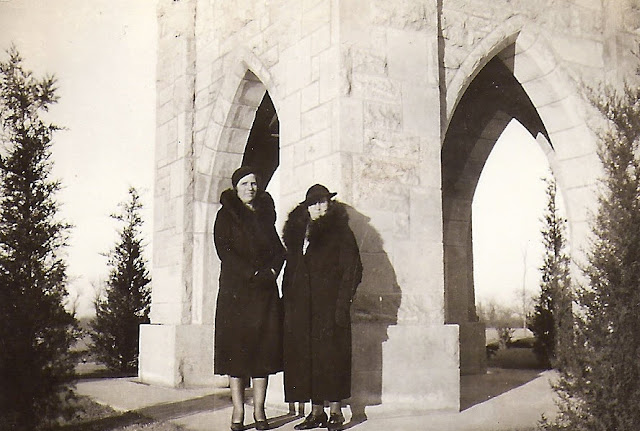 Carla, my third cousin 1x removed, wrote the following about this photo.

I cannot tell for sure by any means, but the lady on the right sure looks like Mamie Allen Noah to me. O.E. And Mamie's oldest daughter, Gladys, had a daughter, Lucile Stroman, who was 6'1". If that's them, this pic would not have been taken at Phillip's funeral, since Lucile was born in 1923. You know the clothing of the period much better than I; could this picture have been taken circa 1940-ish? The funny thing is, I have a pair of Grandma Mamie's shoes, and they look just about identical to the ones the lady on the right is wearing. I'm sure they were quite common, so that could be coincidental.


I posted this cemetery photo in 2012 and assumed it was probably taken in Seymour, Texas where my Dad's family lived before the 1930s; the photos belonged to my aunts. However, there is no tower in a cemetery in Seymour. And, Carla is correct, the clothing styles appear to be 1940-ish. On the right is a photo of my Aunt, DeRay Bryan, dated abt. 1936. Her hat, coat, and shoes match the style of the taller woman in the cemetery photo. A browse through photos on a Google search showed similar styles in both the 1930s and 1940s.

Mamie Allen Noah lived in Erath County. She was the wife of Oscar Edward Noah, my grandmother's first cousin. I hope Carla is correct and this is Mamie and Lucile. We need to compare photos of both women.

AND, there are other questions.

Is this cemetery in or near Erath County, Baylor County, or neither?

Would Mamie have traveled a long distance to attend a funeral?

Who took this photo? If it was one of the Bryan sisters, then it would probably have been a family funeral.

Could it have been Buster Bryan's funeral in 1940? That would put the cemetery in Seymour.

Does anyone recognize this bell tower?

Family photographs and documents from the collection of Diana Bryan Quinn.
Posted by Diana at 10:18 PM 0 comments

From the Files of Marguerite Cook Clark: Kade G. Gardner

Kade Gardner, also seen as Kader Gray Gardner, can be found as a seven year old boy on the 1880 census of Red River Parish. According to a later draft registration his birthday was August 3, 1873.

By 1910, Kade was working as a barber and living with his family in Ringgold.

Still in Ringgold, Kade ran a boarding house in 1920. His family lived in the home along with several boarders. His 79 year old mother, a widow, was also living with him. On this census, her name is written as Mary, not Winnie.

In the 1930 and 1940 census records, Kade's occupation was reported to be a carpenter in a cabinet shop.

Kade died on June 21, 1953. He is buried in Providence Cemetery in Bienville Parish along with his wife, mother, and several family members. His father is buried in Social Springs Cemetery, Red River Parish, along with some of Kade's siblings.

Friday's Photo: Thanks to Facebook, a Confederate Soldier is Identified.


I found this photo posted to the Facebook group, LIVING HISTORIES OF NORTH LOUISIANA FAMILIES. The owner graciously allowed me to share it on my blog.

John Lawson Wimberly looks  exactly like a soldier in this photo from the collection of Marguerite Cook Clark. 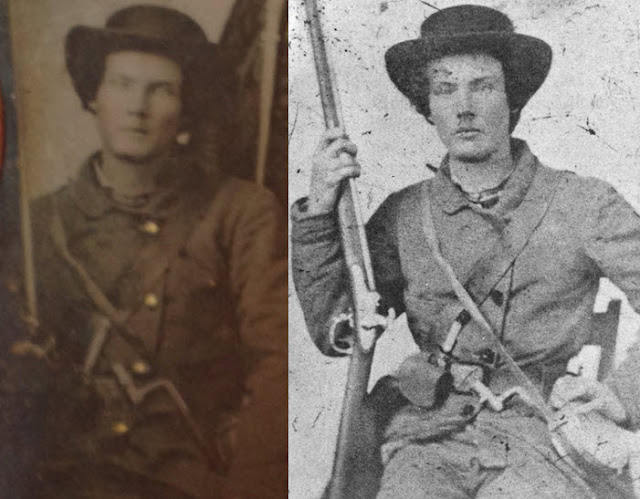 Enlarged on my computer, I could see the straps, collar, and other accessories in the same position on each photo. Even the hat and hairline match!  Not only could it be the same person, but it was probably taken on the same day.

Marguerite Cook Clark was a great-granddaughter of Sarah Wimberly Bryan, sister of John Lawson Wimberly. It makes perfect sense that Marguerite would have had this photo. But, who are the others?

The soldier standing could easily be Sarah's husband, Joseph Bryan. His nose and mouth are very similar and a wave appears in the same place in the beards of the men in both photos. A better copy of this photo would help with this comparison. The third man is not yet identified.

Thank you to my third cousin three times removed, Marisa, for adding me to the LIVING HISTORIES OF NORTH LOUISIANA FAMILIES Facebook group and to Ken for allowing me to share the photo.

Photograph of John Lawson Wimberly from the collection of Ken Shively. Used with permission.