My husband had a close DNA match on his Quinn side and I spent several weeks looking for more about his grandfather's siblings. I thought it would be easy, but not so much.

John Quinn was one of my targets. He is an older brother of my husband's grandfather, William Quinn (#2). I was excited to find his wife's (Ellen/Ellie Quinn) naturalization papers at Ancestry. In the papers, I found her maiden name (Buckley), her place of birth (County Kerry), John's date of arrival from Ireland, and exactly when and where he completed his naturalization.

According to Ellen's papers, John was naturalized June 8, 1918, at Camp Wadsworth, in South Carolina. I didn't find those records online so moved on to his arrival in the states. It was written that John entered the United States on October 8, 1914, in Boston. I had never looked in Boston.

I searched the Massachusetts, Passenger and Crew Lists, 1820-1963 at Ancestry.com. Only one John Quinn was found traveling from Ireland to Boston in 1914. This 21-year-old, John Quinn, was the son of Peter Quinn of County Kerry. He arrived in Boston on May 14, 1914.

I did find a Willie Quinn arriving in Boston on October 6, 1914. I believe this might be John Quinn who for some unknown reason used his brother's name. The ship record indicates he was the son of Mrs. William Quinn in Caheravoneen, Kinvara and was going to live with his sister, Margaret Quinn, in Louisville, Kentucky.

Although it is possible that William Quinn traveled to the United States in October 1914, I believe the Willie in the above clip from the manifest is actually John. It would be nice to have more input or suggestions as to where else I might look. Here are some of the facts I considered. Please tell me what you think.

I was told that William Quinn did not use his real name when he traveled to the USA in 1921, but I was able to easily find him on a ship's manifest as William Quinn. Maybe the story was about John. And, if John felt the need to use William's name when he left Ireland, what was the reason?

Family photographs from the collection of Mary Meaney Weber. Used with permission.

Quinn, Diana B. “Moments in Time, A Genealogy Blog: The Family of William Quinn and Bridget Brannelly.” https://momentsintimeagenealogyblog.blogspot.com/2019/01/the-family-of-william-quinn-and-bridget.html. Accessed 24 Feb. 2019.
Posted by Diana at 9:38 AM 1 comments

After the death of George Washington in 1799, his birthday on February 22 became an unofficial day of remembrance. In 1879, Washington's birthday became a holiday in the District of Columbia and, by 1885, a national holiday.

Postcard from the collection of Diana Bryan Quinn

A DNA match to my great-grandmother's family had me looking at old Davis photos. This photo shows my great-grandmother, Bertha Davis, along with Hattie Page Meredith (Bertha's niece), and Damon, son of Hattie, in the tub. This appears to be about 1926, one of the times my grandfather, Claude Davis, visited his mother, Bertha. I assume this photo was taken in Edmonson County, Kentucky.

To read more about my Davis family click on the links below.

Family photographs and documents from the collection of Diana Bryan Quinn
Posted by Diana at 11:53 PM 0 comments 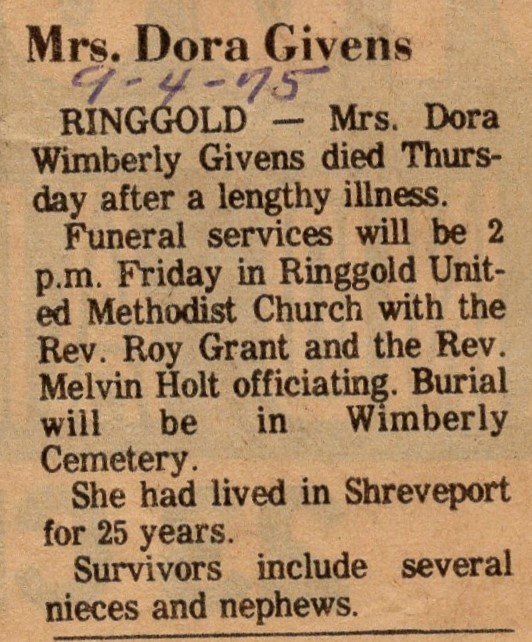 Two weeks ago, I posted the obituaries and a photo of Octavia "Tavia" Wimberly Gillon. Today, I have her sister's obituary.

Eudora "Dora" Wimberly Givens was about a year older than her sister. She was born on March 12, 1891, to Hugh Robert Wimberly and Lula Martha Lawson.

Before her marriage to William Albert Givens in 1919, I found Dora mentioned frequently in community news. She was very involved in the family's store. As early as 1912 she was going on buying trips to St. Louis and New Orleans.

Dora married William Albert "Jack" Givens on December 22, 1919, at her parents home.  Jack, often found in newspapers as "Albert" or "W. Albert," was the agricultural demonstrator in Lincoln Parish, Louisiana. After their marriage, Dora and Jack moved to Winnsboro. From Jack's obituary, it appears they moved to Ringgold and lived there for a long period of time.


My great-grandfather, Charles A. Giddens, owned a men and boys clothing store in St. Louis, Missouri by 1923, throughout the 1930s, and possibly the early 1940s. The building, at 7622-24 South Broadway, was built about 1885. According to the National Register of Historic Places, the building is brick and two stories with a flat roof surrounded by a brick cornice. It is described as having three doors, including one to access the second story. The first story has been remodeled and is sided with vertical boards but some of the original cast iron facade is exposed on the outer edges.