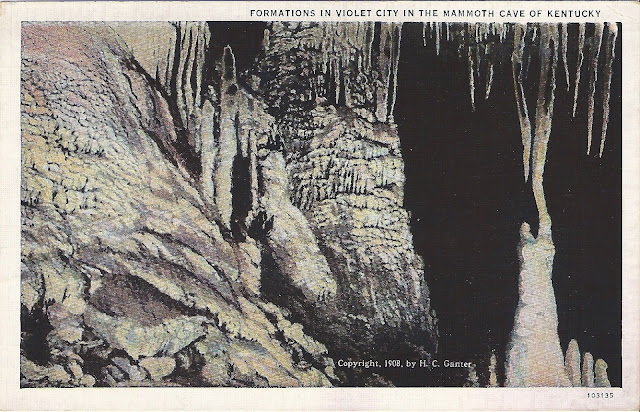 On August 30, 1926, my grandfather, Claude Davis arrived in New York City aboard the Ancon, a U. S. passenger and cargo ship.  On the arrival list, his place of birth is listed as Mammoth Cave, Kentucky. I seriously doubt that he was born in Mammoth Cave, although I wouldn't be surprised if he spent much time in and around the cave.  At one time, Claude lived in or near the community of Elko which is now in Mammoth Cave National Park. Some Davis family members attended Joppa Baptist Church in Elko and several attended Silent Grove Baptist Church which is right on the edge of the park. Family members are buried in the park and many Davis family deeds describe property on the Green River that moves throughout the park.


Postcards from the collection of Diana Bryan Quinn

I saw this postcard, along with many others at Maggie Land Blanck's Population and Emigration webpage. Although I knew nothing about Queenstown, I found it of interest as some of the Quinn and Murray family ancestors came to the United States from the port of Queenstown.

The main ports from Ireland were Liverpool, Queenstown (Cobh), and Glasgow. Queenstown was originally called Cobh until Queen Victoria visited in 1849. The name was then changed to Queenstown, but in 1921 changed back to Cobh. Over two million Irish people immigrated to the United States from the port of Queenstown.

The following Quinn and Murray family members came to the United States from Queenstown:

A Thoughtful Son on Valentine's Day 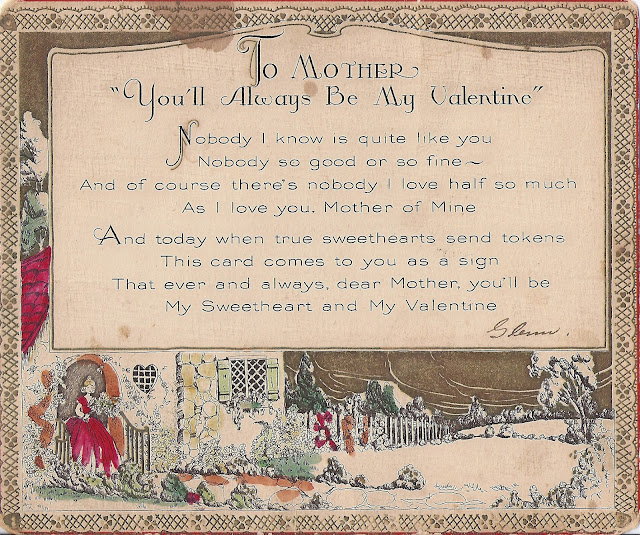 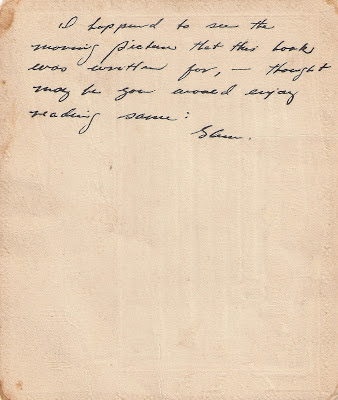 This Valentine was one of many treasures found in books that were purchased at an estate auction in the 1980s. I don't know the name of the book where this was found, but did find other two books that Glenn gave to his mother. To Mother From Glenn Xmas 1930 was written inside Years of Grace by Margaret Ayer Barnes and To Mother - Mother's Day 1931 From Glenn was written in Young Man of Manhattan by Katharine Brush.

Agnes Spence and Emma H. Spence are written in other books came from that estate.  So, a little research indicated that Emma H. Spence was the mother of Robert Glenn Spence. One of his many siblings was Agnes Spence.

Records indicate that Robert Glenn Spence was born on July 11, 1907 to John Cecil Calhoun Spence and Emma Halstead Spence. He was a graduate of Woodrow Wilson High School in Portsmouth, Virginia and graduated from Virginia Polytechnic Institute in 1929 with a degree in business. Glenn married Beulah James Flanagan on November 4, 1933 in Radford, Virginia.

Robert Glenn Spence died on October 11, 1987. He is buried in Portlock Cemetery  in Portsmouth, Virginia.

Email ThisBlogThis!Share to TwitterShare to FacebookShare to Pinterest
Labels: Halstead, Not my family, Spence 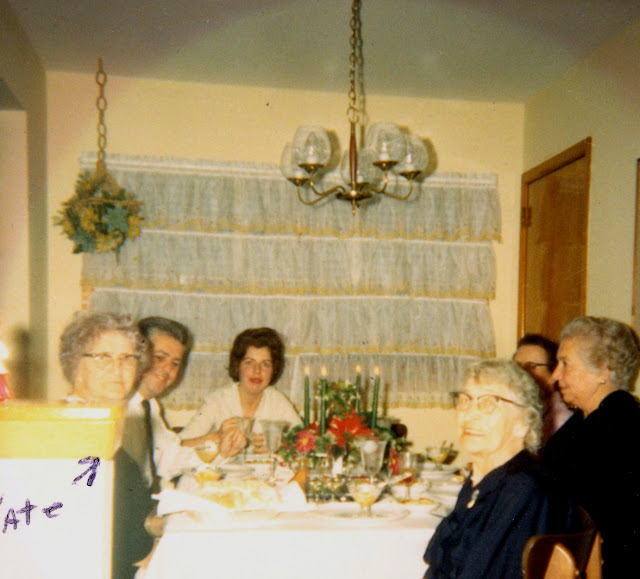 This old Polaroid photo was sent to me in the 1990s by Paddy and Theresa Moylan. The three older women, from left to right, are Catherine "Kate" Murray McGing, Sarah Murray Meehan, and Susan Murray Quinn.  I can't identify the man in the picture, but was told that the woman next to him was Theresa Moylan.


Does anyone recognize the man? Does anyone have pictures of Kate and Sarah when they were younger.