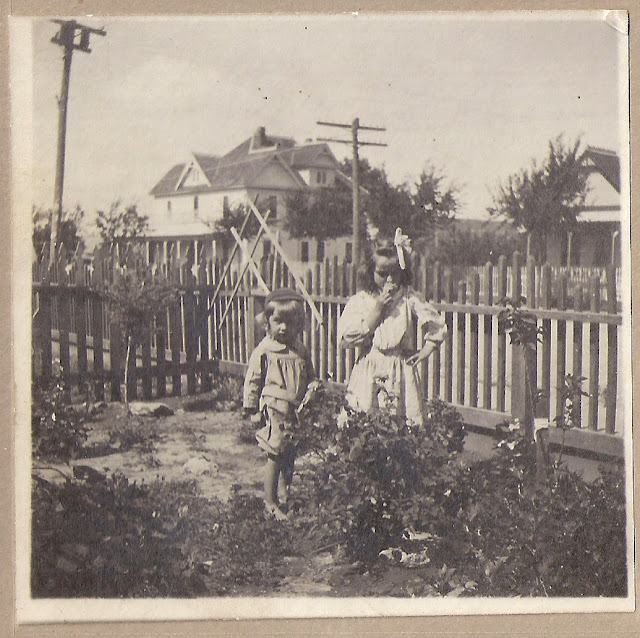 I have always liked this picture. There is no identification on the picture. However, I will only find clues by posting it and hoping that another Bryan or Hairston descendant has the same or a similar picture labeled with the children’s names.  There is a good possibility that it was taken in Baylor County, Texas where my grandparents lived in Seymour and Levelview.  I like the big house in the background and wonder if it is recognized by someone reading this in Baylor County.  So, if you are a Bryan or Hairston descendant and have any pictures that you would like to compare, I would love to hear from you.  By the same token, if you are familiar with homes in Baylor County and think that this could be a Baylor County picture, I would also like to hear from you.  If you don’t want to post to the blog, you can send me an e-mail at dewquinn@aol.com.

My father, Whit Criswell Bryan, was born in Seymour, Texas on December 21, 1920.  His birth announcement was found in the Baylor County Banner and, as I wrote previously, he was probably born in this house.

I like to look at details in photographs to determine location and time. Often, these details tell more information about my family and the places that they lived. These baby pictures of my father were probably taken in Seymour, Texas and all appear to be at the same location; presumably revealing the home of a neighbor.

Also included on that census sheet were the families of Galen D. Plants  and  M. D. Lankford, but no streets were named.  The W. F. Hooser and Willy Stevens families nearby lived on Arkansas Street.

The following pictures are of family members next to the house. The siding and windows in the picture match those of earlier pictures.  My grandmother passed away in 1927 and information from a distant cousin leads me to believe that the family was living in the home at her time of death.

My grandfather served two terms as the county tax assessor and according to his obituary, was once a large land owner in Baylor County. However, he died penniless in 1929 and I suppose that he lost the house to foreclosure.

I would appreciate any thoughts from those who live in or know about Baylor County.  I would love to know who purchased the house and if it is still standing.  A look at street view map of North River Road showed some homes that resembled the Bryan family home.

You can post your comments to the blog or send me an e-mail at dewquinn@aol.com.

Obituaries, deaths, and more from old issues of The Baylor County Banner are on my web pages. If the family name is mentioned on my pages, send me an e-mail to request the entire article.

Next: Family Pictures:  Houses and Other Buildings

Thank you for reading my blog.

In 2001, I visited Seymour, Texas and found houses with similar roof lines and remnants of similar porches. Although I considered this house unique, I learned that the style was not unique at that time.  Looking at Latchstrings, A Cross-Section of Baylor County Homes published in 1986 by the Baylor County Historical Society, I saw even more houses of the same style.


According to the following articles found in the Baylor County Banner, my grandfather bought the land in 1917. About the same time, he purchased a home to be moved to his property from Mr. W. A. Bennett.


The home that he purchased could have very likely been the residence of W. A. Bennett seen below. The picture was found while transcribing old issues of the Baylor County Banner and appears to have been taken in 1906.

If you have any thoughts about this house, you can post your comments to the blog or  send me an e-mail at dewquinn@aol.com

Next - The House in Seymour   Part III

Family Photos: The House in Seymour – Part I

The Bible contained all sorts of treasures; newspaper clippings, photos, certificates, a lock of hair, fabric from my grandmother’s wedding dress, and a picture of this house.

In the late 1990s, I asked my father about the house. He was certain that he lived in it when he was much younger. He remembered sitting on the front porch while trying to open his father’s pocket watch. He couldn't open it, so broke it open with a hammer. This watch had been passed down from his grandfather. When his father saw it, he chased Dad off of the porch . . . said his sisters saved him.

This was enough to convince me that the house was a Bryan family home in Seymour, Texas and probably the home where Dad was born. The tall man on the porch may be my grandfather, Redic Eli Bryan.  The following pictures are of Dad as a baby and Buster, Dad's older brother; both taken next to the house.

I will post more about the house in the next two posts. If readers familiar with my family or with Seymour have any information about the house, please post your comments to the blog or send me an e-mail at dewquinn@aol.com.

Next - The House in Seymour  Part II

My grandparents, great-grandparents, two infant children, and my father’s older brother are buried in Woodmen / IOOF cemetery.  I have visited once, but don’t remember much more than the sign on the fence and my grandmother’s headstone – the only family member with a marked grave.

This cemetery picture was found in pictures that once belonged to my father’s parents and his sisters. Is this a picture of the Woodmen/IOOF cemetery or another in or near Seymour?  Does anyone recognize this tower? 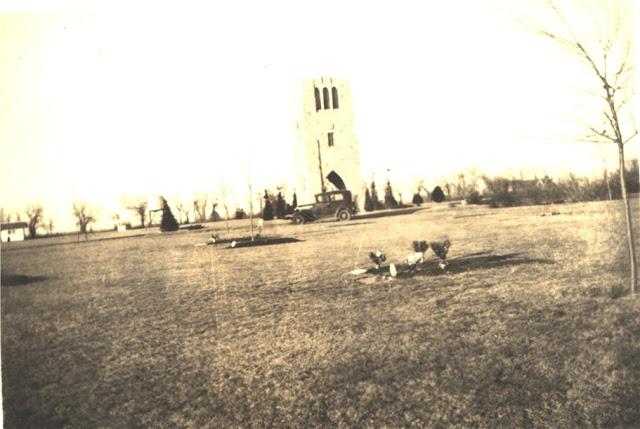 Below is a picture that might have been taken at the base of the tower. 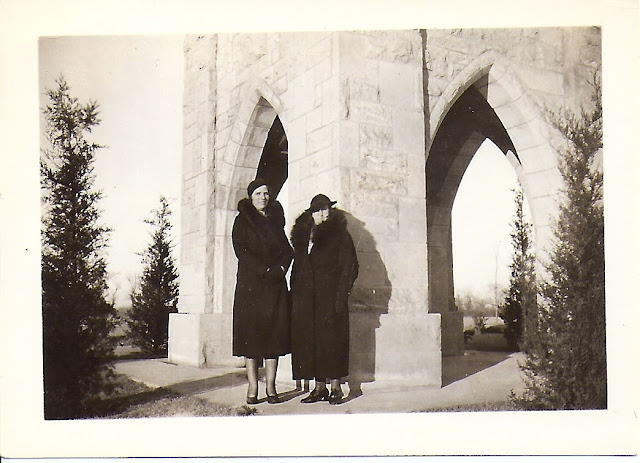 Thank you for reading my blog.

Next - Family Photos: The House in Seymour 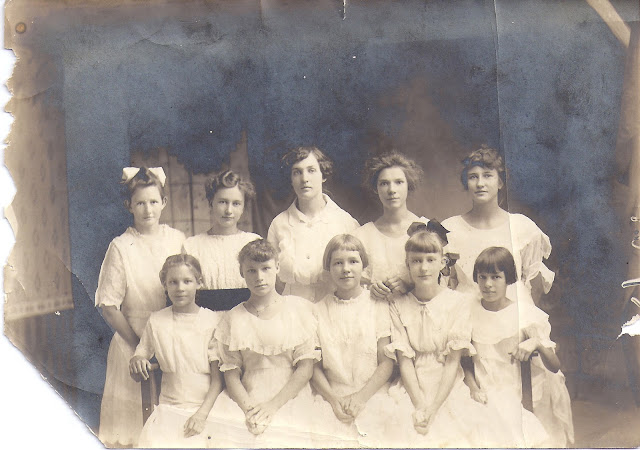 This picture is one of the many pictures sent to me by my cousin, Jackie (see Forgotten Family Part I). According to the note written on the back, DeRay Bryan is in the front (middle) and her sister Marie is sitting on her right. Millard Ray Latta is the tall girl in the back. DeRay and Marie were my father’s sisters. Millard Ray was his first cousin.

I suspect that the picture was taken between 1912 to 1916. The family attended First Baptist Church and lived in Seymour for most of that period. Can anyone identify the other girls? 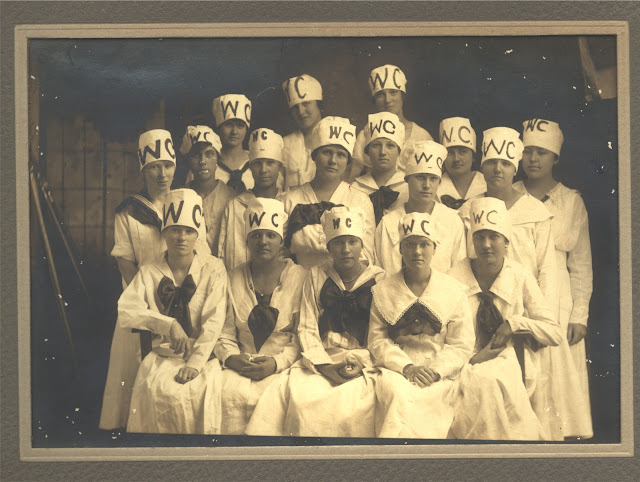 I decided to compare the girls to those in the W.O.W Women posted on my blog July 8, 2011 and then realized that the windows and curtains were the same in both pictures. Was this someone’s home? There is recognizable wallpaper in the above picture.  Does anyone have similar pictures?