There is nothing written on the back of the above photo, but I remember clearly Dad telling me that the couple in the middle was Chris Wieland's parents. That would be Frank and Mary Wieland. However, when enlarging the photo and comparing it to Chris Wieland's parents in the below photo that was taken about the same time, I can say that I don't believe it is the same couple.

I believe that Guy and his wife are the most likely candidates, but need input from family. The photo of Guy on the left was published in a newspaper in 1960. Click here to see the article about his retirement.

The photo below is the last Wieland photo to be posted - Aunt DeRay and Chris Wieland, taken on the same day as the photo at the top of this page. 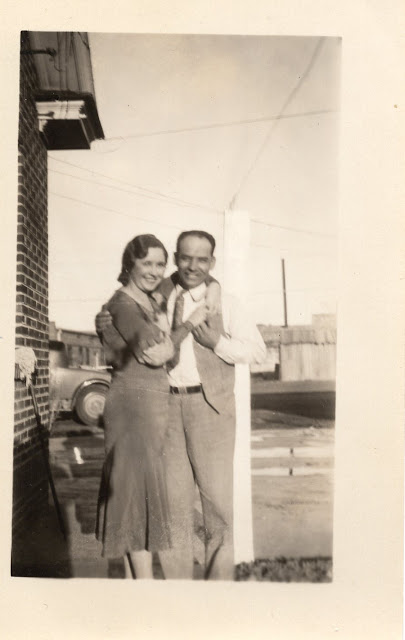 Family photographs and documents from the collection of Mark Laws. Used with permission.


My father's brother has always been difficult to find when researching. Hairston Albritton Bryan also known as Buster has been found in records as H. B. Bryan, H. A. Bryan, Harry Bryan, or Buster Bryan.  I didn't expect finding his wife, Wanda Land, to be so difficult. I could not find her in any early records until I realized Wanda and Vernoy Land who first married Rufus Dorman in Oklahoma (August 10, 1918) were one in the same.

Wanda, or should I say Vernoy, was the youngest daughter of David Vernoy Land and Mary Ann Laney. She was born in Oklahoma and named David Vernoy Land after her father. Her named appeared as Vernoy on the 1910 and 1920 census records as well as on her marriage record to Rufus Dorman.


It was Rufus Dorman's draft registration for WWI that revealed her full name to be David Vernoy Land.

Wanda and Buster marry in Odessa, Texas in 1935. The 1940 census indicates they lived in Hobbs, Lea County in 1935, but by 1940 Wanda, Buster, and Melvin Randall were living and working in Seminole, Gains County, Texas.

Buster died in 1941 after an oil rig accident. Wanda and her son moved back to New Mexico where she had family.

Wanda's name appeared on a marriage license in 1954 to Hubert James Reed as David Vernoy Wanda Bryan in Bernalillo County, New Mexico. In 1964, Wanda Sagely was listed as attending her grandson's funeral. She was also Wanda Sagely in 1985 when mentioned in her son's obituary. Between those years D. V. Sagely was found in Hobbs newspapers as having sold land or having a tax refund.

Wanda was last found in a Hobbs newspaper as being admitted to the hospital on September 19, 1985. No record of her death has been located. 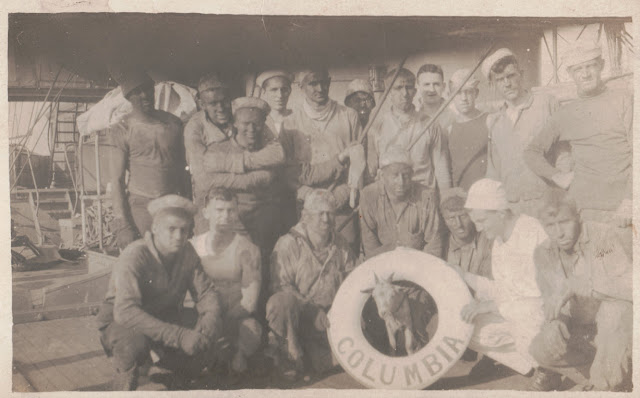 My grandfather, Claude Louis Davis, worked on a variety of ships for many years. I assume that he is part of this crew, but must have taken the picture. I don't think that he is in the photo.

I love that this photo was taken in Hampton Roads. I lived in Hampton Roads for my entire life. My grandfather grew up in Kentucky and spent most of his adult life in New York. However, he moved to the Hampton Roads area to live with my family just a few years before he died.

Last names of the crew members pictured are listed on the back. Did you notice the goat? For many years goats were carried on ships for milk and meat - much easier to transport than cows. Later, they were on-board as mascots. 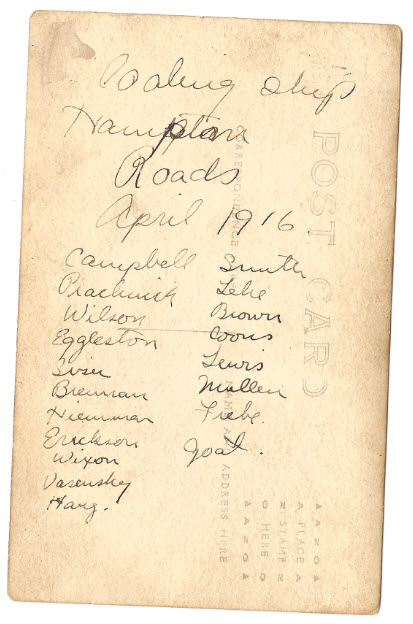 Family photographs and documents from the collection of Diana Bryan Quinn.
Posted by Diana at 10:40 PM 0 comments 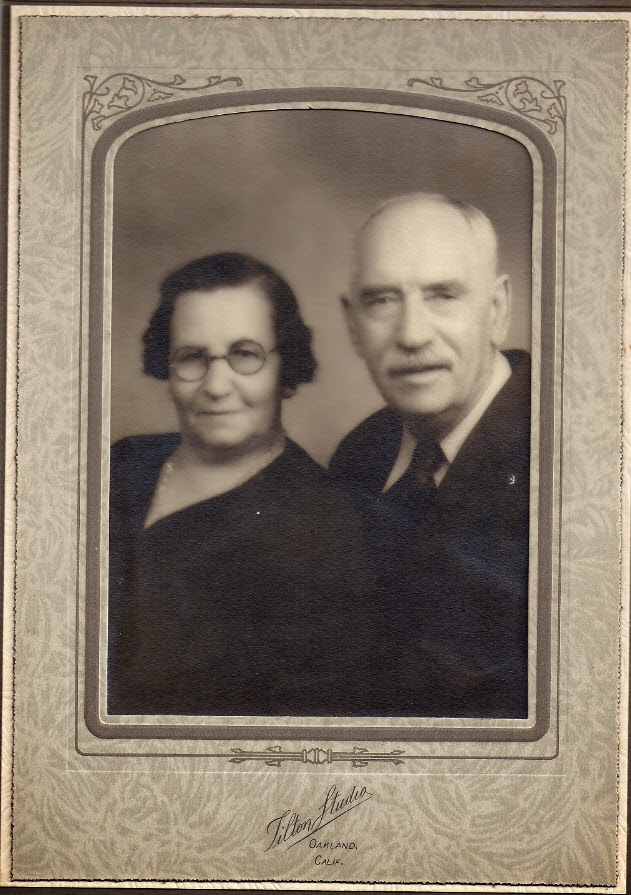 For years, I have tried to identify the couple in this photo taken in Oakand, California. Were they family? Friends? Did family live in California? Some did, but none matched this couple. This photo belonged to my Aunt DeRay Bryan.

After researching DeRay's friend, Chris Wieland, I thought about this photo. His family lived in Oakland, California. A fellow genealogist with Chris Wieland in her Ancestry.com Public Tree sent me the below photo of some Wieland family members in California.

Mystery solved! My unknown couple was Frank Anthony Wieland and his wife, Mary "Mamie" Theresa Schafer/Schaefer.  Click on their names to see a little about Frank and Mamie. They were the parents of DeRay's friend Chris Wieland.

Family photographs and documents from the collection of Mark Laws. Used with permission.


I have 18 photos of Chris Boss Wieland, two photos taken at his funeral, and a photo of his parents. He is not my family, but was obviously a very good friend of my Aunt DeRay Bryan.

My father remembered Chris by his first and last name and labeled most of the photos.

Chris has been seen in records as Christ, Chris, and Christian. Wieland has also been seen as Weiland.

In 1930 he was living with his wife on Weatherly Street in Borger, Texas. His brothers Omer and Leonard also lived in Borger. I don't know if Chris and his wife divorced or if she passed away, but he appears to be with Aunt DeRay in the 1930s.

Chris passed away on December 22, 1935. You can see photos of his funeral day and his grave site at my post I Found the Bell Tower AND it is NOT in Texas!

I have created a family tree with much of the information I found about Chris, his parents, and siblings. All of my photos of this family and some very informative newspaper clippings will be added to this tree. Look for Chris Wieland's Family Tree at Ancestry.com in the Public Trees. If you don't have Ancestry, send me an email or comment on the Chris Wieland post found on my Moments in Time Facebook page.

I am grateful to all of those who shared family photos and documents. When I began my research, I knew almost nothing about my family - not even family names. Those who shared helped me learn far more than I ever expected.

Today's photos were shared by families who don't know each other, live in different states, but are all descendants of my great-great-grandparents, Reddick Bryan and Elizabeth Regan, who settled in Bienville Parish, Louisiana in 1838. 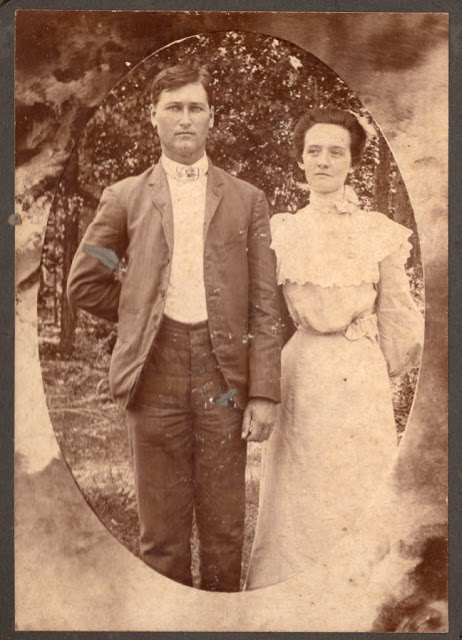 These photos appear to have been taken on the same day. It is assumed to be the couple's wedding day, March 8, 1904 in Ringgold, Bienville Parish, Louisiana.

Both Tom and Lizzie were born in Ringgold and both remained in Ringgold until their deaths.

Lizzie was the daughter of Josie S. C. Bryan and Joseph W. Cook. Tom was the son of Hiram L. Corley and Sarah E. Knighton. 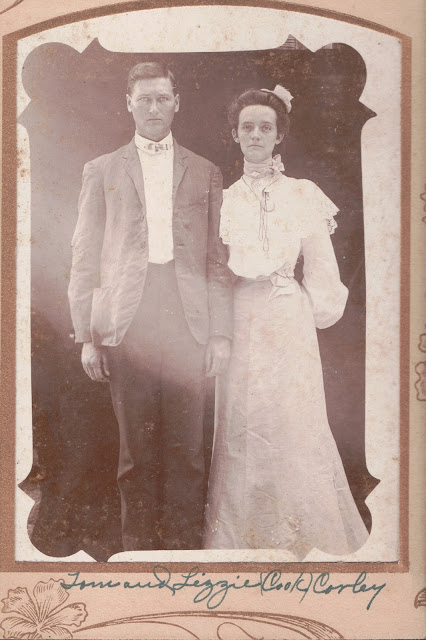