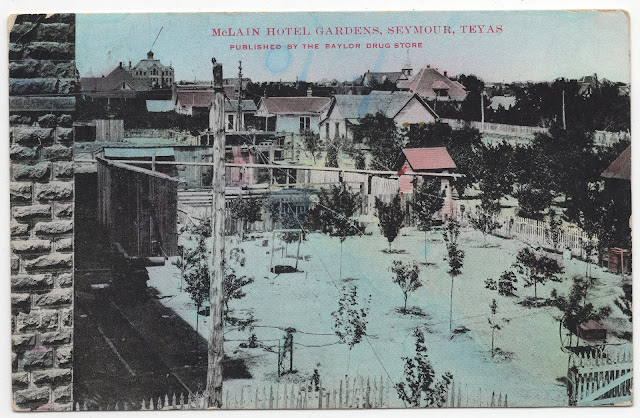 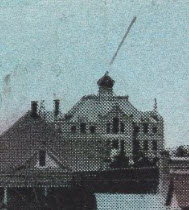 This post card, purchased on ebay, was mailed to Minna Radusch of St. Paul Park, Minnesota. The postmark isn't clear, but it was mailed sometime between 1908 (when the stamp was first issued) and assumed to be sent prior to the fire in 1920.

Written on the card is The building marked with the Inkline is the Hotel. However, the inkline appears to be above what I believe is Seymour High School. The Washington Hotel was another hotel in Seymour. Could the sender have mistaken the high school for the Washington Hotel?

I cannot read the closing portion and signature at the end of the message. Any help is appreciated.

Building of the McLain Hotel was announced in 1890 after citizens of Seymour came together to form the McLain Hotel Company. The stone hotel was going to be built on Main Street in Seymour for a cost of $30,000.

In 1893, as reported in the Galveston Daily News, the McLain Hotel was nearing completion.

In 1901, the hotel had been standing for ten years in unfinished condition. It was reported in the Seymour News that J.C. Ziegler was working on the roof and the McLain was nearing completion.

The Jacksboro Gazette gave a detailed report of the fire that destroyed the McLain Hotel on November 1, 1920.

The fire was covered extensively in the November issues of the Baylor County Banner found on microfilm. The fire appeared to have been caused by a gas explosion. It was reported that a gas coffee urn had been removed just days prior to the fire and a build-up of gas was thought to have caused the explosion.

It was reported that most of the 56 rooms were occupied at the time and about 70 people were evacuated. Mr. S. Goram, hotel manager, and his brother, Wallace, were able to get most residents out of building. Mr. Hoyt Whiteside of Seymour died in the fire. Andy Bowie was one of the last persons to make it out of the building.

To read more about the McLain Hotel, visit the The Portal to Texas History.

The Parents of Reddick Bryan 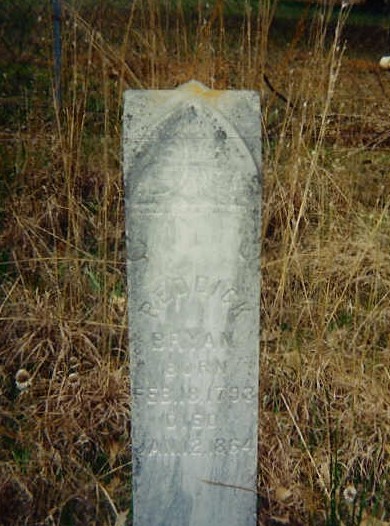 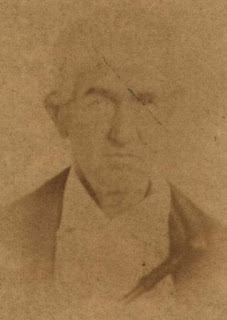 Reddick’s father is thought to be James Bryan, son of Needham Bryan, both of the Martin/Halifax areas of North Carolina. There is no documented proof showing James as Reddick's father. James gave land to Reddick and Reddick completed land transactions with Power of Attorney for James; all in Martin County, North Carolina.

On December 24, 1817, in Twiggs County, Georgia, Reddick Bryan applied for letters of administration on the estate of a James Bryan, late of Twiggs County.  This was found in the January 6, 1818 issue of the Georgia Journal.  In March of 1818, Reddick was listed as one of two administrators for the estate of a James Bryan. This was seen in several issues of the Georgia Journal. No records of estates are available as the courthouse in Twiggs was burned in 1901. This 1818 estate notice is the last mention of Reddick associated with James Bryan. I believe this James Bryan was the James thought to be Reddick's father.

Some Public Member Trees found on Ancestry.com state that his mother is Elizabeth Hall.*  She is not his mother. In most of those Public Family Trees her birth year is 1803, ten years after Reddick's birth.

Mary Bembry, born in 1821 is another person found as Reddick's mother in several Public Member Trees.  Bembry is a name found in the Martin / Halifax area, but Mary is much too young.

Other Public Member Trees indicate Reddick’s mother was Mary Reddick Bryant / Bryan born in Crawford County, Georgia. This Mary’s maiden name of Reddick has not been proven and she was married to a James Bryan who died around 1850. I have not seen documentation indicating Mary and her husband, James, were parents of Reddick.

*I added a story about Reddick's parents to my Public Member Tree at Ancestry in 2012. I wrote that Elizabeth Hall was the mother of a Redick O’Bryan who was born in NC and spent much of his adult life in Hopkins County, Kentucky. Elizabeth Hall was NOT the mother or wife of Redick O'Bryan.  I will delete that story and replace it with this post.

This photo and many other treasured Giddens family photos can be found in a box at my mother's home. These children were my mother's first cousins. They were the children of my grandmother's sister, Elizabeth Giddens, and Louis James.

Family photographs and documents from the collection of Elizabeth Davis Bryan 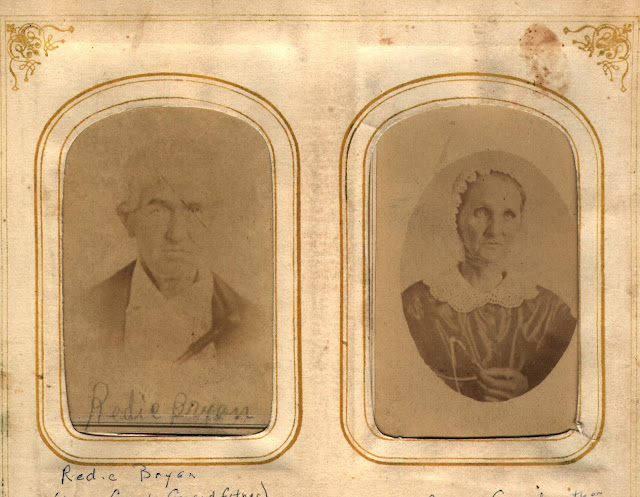 If you have read the stories on my Ancestry Public Member Tree, you may have seen the below information. I thought it would be good to share here as well.

The photographs were probably taken between 1860 and 1864. Reddick died in January of 1864. On the back of each, the following is written:

E.W. Mealy's
Photograph Gallery,
Monroe, Louisiana
Duplicates of this can be had at any time.

These are CDVs (Cartes de visite), not tintypes, which were widely available in the  United States after 1859. I know of one other Bryan descendant who has original copies of these photographs and it would be interesting to know if others have survived.

Imagine how surprised Reddick and Elizabeth would be to know these have been copied by hundreds of persons and viewed by thousands around the world.

Taylor, Maureen. "The Photo Detective, How to Date an Old Photograph" Web. 29 Jan. 2017. <https://maureentaylor.com/learn/how-to-date-an-old-photograph/>.
Posted by Diana at 6:38 PM 0 comments