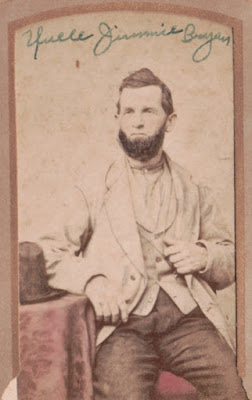 I was researching James Bryan this week and checked Ancestry.com's Public Member Trees to see what other researchers found. I didn't find any new information; however, noticed his name was written as James B. Bryan (49 times) and James Bryan (28 times).

I didn't remember seeing a middle initial on any documents earlier this week so decided to verify.

He was James Bryan (with no middle initial) on all census records from 1850 to 1880, in four Bible records, on his headstone, in court records, in Masonic Lodge records dating from 1852 until 1880, in an Indian Wars pension request, and in land transactions. In all of the documents, there were others who had middle initials, but never James.

I could only find James B. Bryan in three places. None were original documents.


My website information was taken from Dad's genealogy notebook. Not any of the Public Member Trees at Ancestry with the name James B. Bryan had documentation to support the middle initial "B." I would assume some researchers found the name James B. Bryan on my website while others copied it from other Public Member Trees at Ancestry.

I have changed James' name to James Bryan on my website and corrected Alice Mary Wimberly's name as well. You can visit my Bryan pages by clicking here. 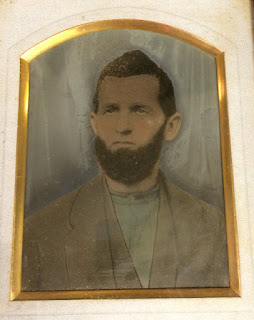 James Bryan was born on February 9, 1815 or 1816* in North Carolina - probably Martin County.  He is thought to be the first child of Reddick Bryan and his first wife. His mother's name has been said to be Teletha or Lilitra and her last name is unknown. James had one younger brother from this union - Simeon Baker Bryan, born January 18, 1817.

As a child James moved to Georgia and lived in Twiggs County. It is unknown if he moved prior to his mother dying of if she passed away in North Carolina. His father married Elizabeth S. Regan in 1821, a widow with two young boys. The family grew and in the late 1820s moved to nearby Houston County, Georgia.

In late 1838, his family left for Northwest Louisiana. The family settled on land that would eventually be in the parish of Bienville. James married Alice Mary Wimberly on January 13, 1846. They adopted two children, Josie and John Terrell Bryan.  The children's biological parents were the siblings of James and Alice - Joseph Brown Bryan and Sarah Margaret Wimberly Bryan.

James served in the 55th Militia in Houston County during the Seminole Indian Wars in 1836 and was said to have served in some type of local reserves or home guard during the Civil War.

James's physical features were described in his wife's application for a widow's pension from the Indian Wars. At age 20, he was described as being 5 feet 10 inches tall with a fair complexion, dark hair, and blue eyes.  His name is seen in letters and albums as Jim or Jimmie. James was active in his church and was a Mason. He was a life member of Mackey Lodge in Bienville Parish.

James passed away on August 24, 1884 and is buried in the Wimberly Cemetery in Bienville Parish, Louisiana. He died happy.

*According to transcriptions of family information found in both Reddick Bryan’s and Joseph Bryan’s family bibles his birth year is 1815. However, his headstone and one other Bryan family bible indicates that he was born on February 9, 1816.

The 1870 census is one of historical significance. It was the first census after the war. Families had relocated. Many women were seen as heads of households. And, it is the first census record that lists African Americans by name.

Homer J. Twitchell was the Assistant Marshall for the 4th Ward in Bienville Parish, Louisiana. This young man, from Vermont, was the 21 year old brother of Marshall Twitchell, a state senator, former Freedman's Bureau agent for Bienville Parish, and self-proclaimed carpetbagger. In 1870, Homer lived with his brother and other family members at the Starlight Plantation in DeSoto Parish. This was in an area considered a Yankee colony. Just four years later, Homer would be one of several local officials murdered in the Coushatta Massacre.

The 45 pages of the 4th Ward in Bienville Parish Census of 1870 was fraught with misspellings, name errors, and other inaccuracies. I am sure this isn't the only part of the country with records containing so many errors, but what were some of the reasons for these errors?

Here are some family members I found in the 4th Ward Census records.

To learn more about the 1870 Census or the Coushatta Massacre, see the sources at the end of the post. 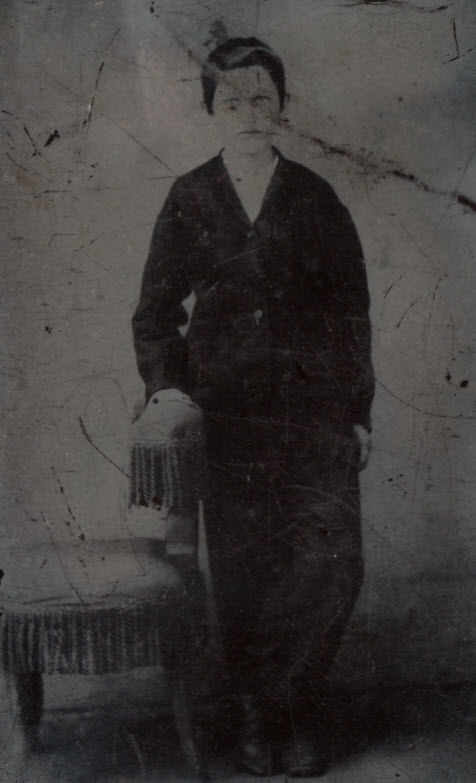 This started out as a very simple post. An unknown young boy. A tintype. A fringed chair. Maybe someone else has the photo and just maybe it can be identified.

A fringed chair gives the photo a date of about 1860. But, then I remembered another photo in Marguerite Cook Clark's collection with a fringed chair.  Alice Wimberly Bryan might be sitting in a chair similar to the low fringed chair in the tintype. 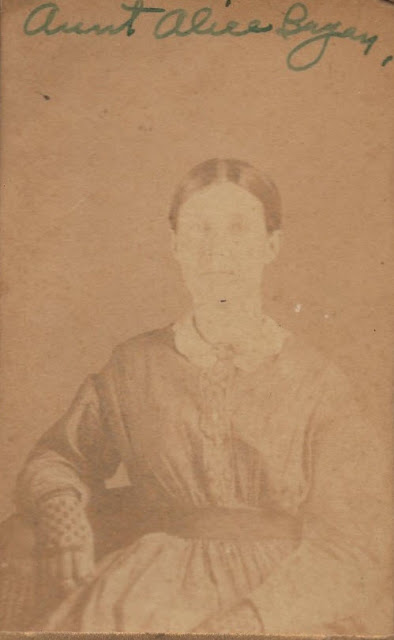 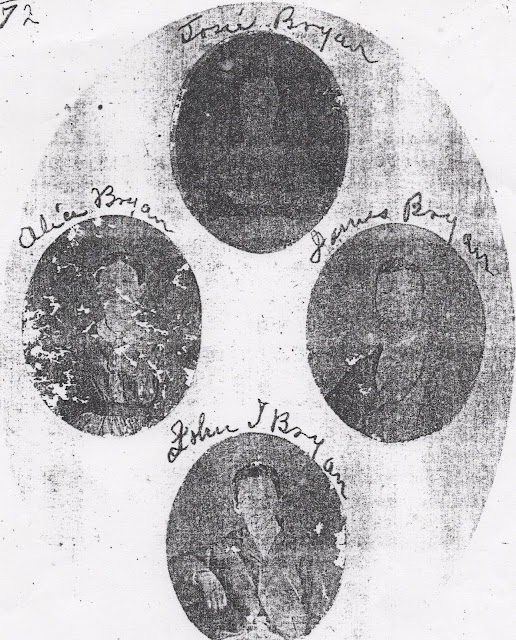 The photos of James and Alice in the above very poor copy appear to the same as the photos below. 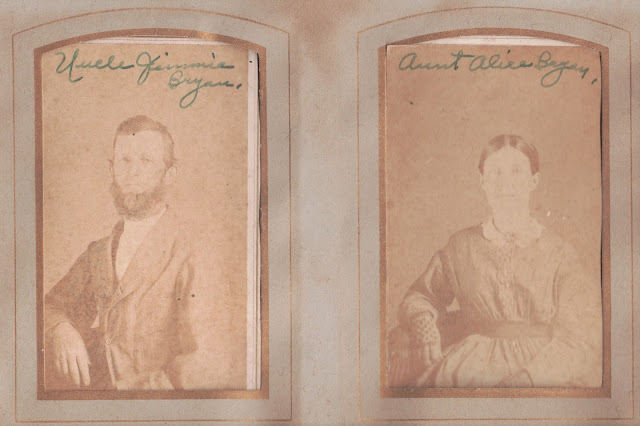 And, this photo below may match the photo of Josie in the poor black and white copy. 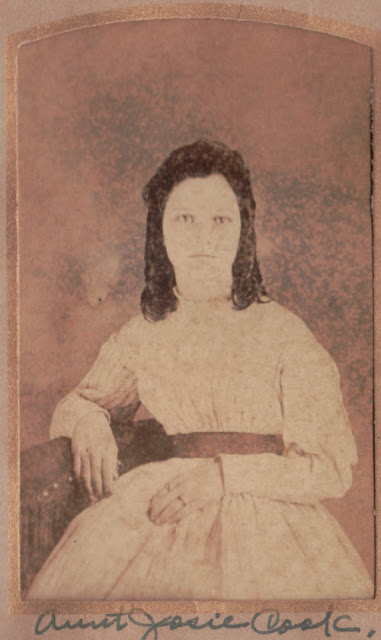 The fringe in the original tintype and Josie's photo is similar. 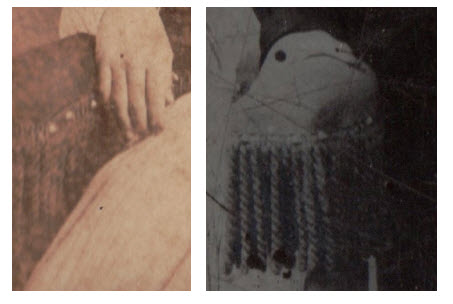 So is the boy in the tintype a young John Terrell Bryan? I think there is a chance, but would love to see a better copy of the photos in Josie Bryan Cook's scrapbook. In the late 1970s, William Trott had possession of the scrapbook. It contained photos and many old letters and documents. Does anyone know where I might find this scrapbook?