Researching these "possible distantly related ancestors" has helped me determine where to look for more documentation and has given me an opportunity to collaborate with others researching this Hairston family.


Ezekiel P. Hairston, another said to be son of John Hairston and Ann Robertson, is #33 of my 52 Ancestors in 52 Weeks challenge. Ezekiel, sometimes seen as Peter, was born about 1794 in South Carolina.

Ezekiel P. Hairston married Jane Barnett on November 19, 1819 in Montgomery County, Alabama. He appeared on the 1830 census record of Montgomery County and purchased two parcels of land in that county then next year. One parcel was purchased with Ann Hairston. Ezekiel P. Hairston was in Austin, Texas by 1850 and paying Burnet County taxes in 1852.  It was said that Hairston Creek, in that county, was named for Ezekiel Hairston. He and his family lived in the nearby Hairston Creek community.

Ezekiel and his wife, Jane, died in March of 1870 in Burnet County, Texas. They are said to be buried in unmarked graves on their land at Hairston Creek.


Hezekiah Hairston is another Hairston who is though to be a son of John Hairston and Ann Robertson and a possible brother to Hugh Brown Hairston. He is said to have been born around 1800.

Hezekiah Hairston witnessed an 1818 deed record in which a John Hairston sold land to a Daniel Hairston or Houston {maybe David Hairston} in Jasper County, Georgia.

The Hairston History gives Hezekial Hairston a marriage date to Susan Westmoreland of about 1825 and their children are listed as Joseph S., John B., Robert S., Narciss, and Welborn Dickson. Information about Susan and the children were reported to have come from a Westmoreland family bible. Where is this bible?

In 1831, a Hezekiah Hairston of Montgomery County, Alabama purchased land at the General Land Office in Cahaba, Alabama.

The Hairston History gives Hezekiah a death date of 1840; however, there is no known source for this date.

Friday's Photo: What are the chances? 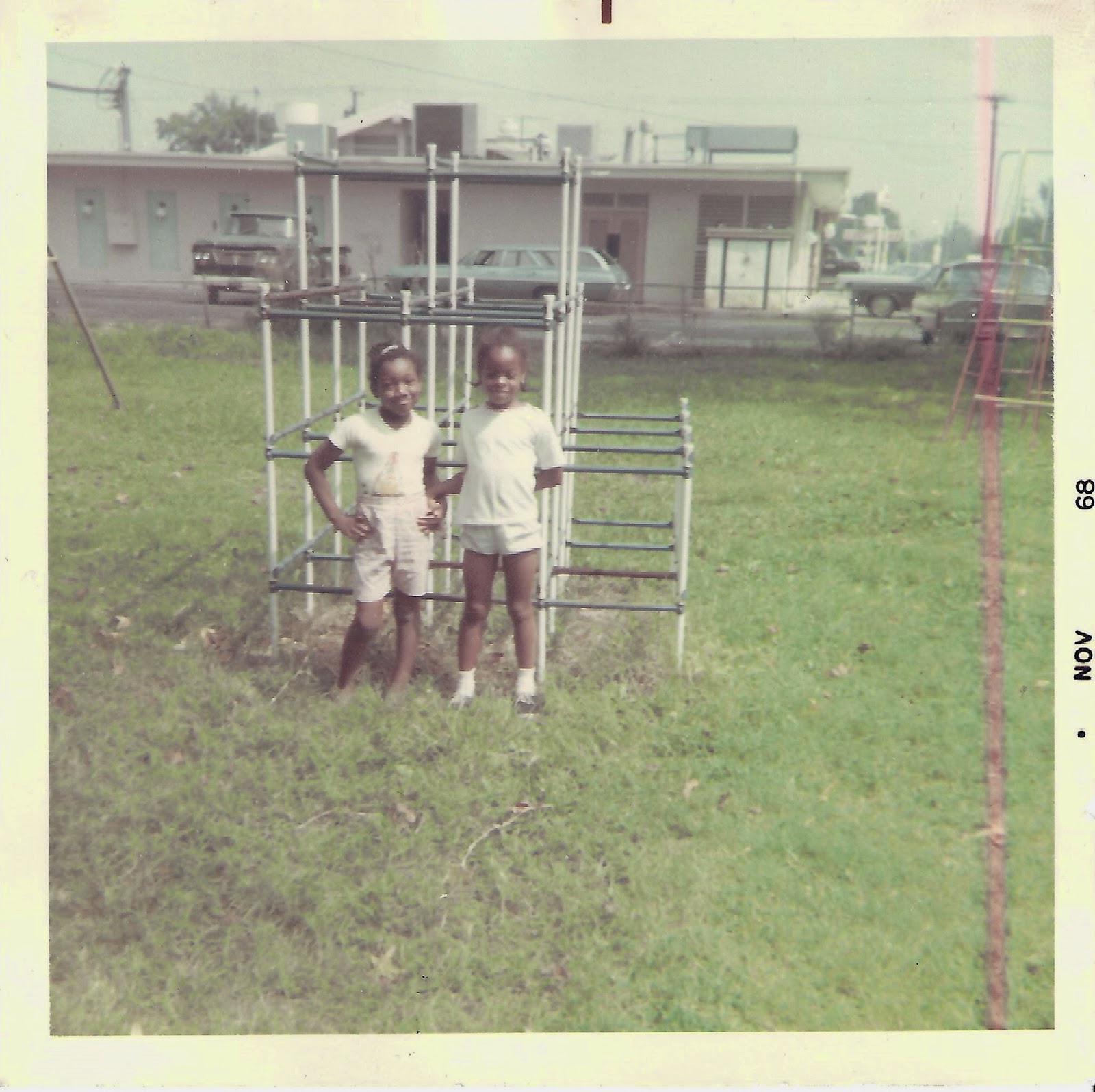 This photo fell out of my childhood album when I was looking for an old family vacation photo. On the back was written "Wanda and Arnette." From age 12 to age 14, I worked as a volunteer each summer at the Good Neighborhood Kindergarten near my home. I played with the students and helped with clean-up and art projects. This photo, taken at Good Neighborhood Kindergarten, was dated 1968. What are the chances that this is my friend, Wanda C.?

Wanda C. and I work in the same building. We met about 10 years ago when, I transferred to my current job. She corrects and submits my travel reports, helps me with orders for classroom materials, and is better than a GPS when I need to find a school or neighborhood. When you hear Wanda's voice on the phone, you usually know that you forgot to sign something or your numbers just didn't add up. 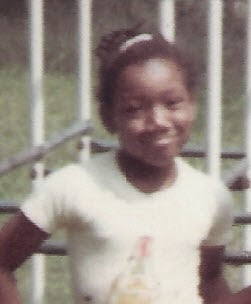 Wanda C. and I grew up in the same part of the city. So what are the chances of our meeting in 1968? Apparently the chances were good because, after scanning the photo at 1200dpi, although a little fuzzy, I could see that it was definitely a young photo of Wanda C. 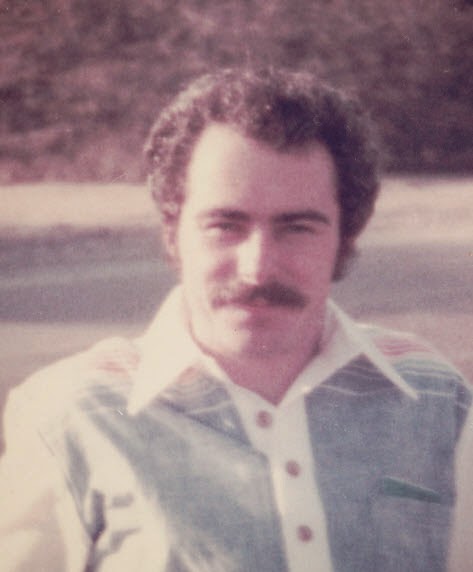 Happy Birthday to my wonderful husband. You are still as much fun as you were 35+ years ago.

Since my last post about John Hairston of Alabama (NOT my great-great-grandfather), three distant relatives mentioned Robert Hairston and Sarah Lang in their email. So, as usual, I had to know more.

The Hairston History and many Public Trees at Ancestry.com state that John and Ann Robertson are the parents of Hugh Brown Hairston, Robert Hairston and several others. However, no sources were given to verify this information.

So, I don't know if Robert Hairston and Hugh Brown Hairston were brothers or even the sons of John Hairston and Ann Robertson, but my DNA matches indicate that they were probably related in some way. Note, on my family tree, dotted lines indicate that no direct evidence has been found to make the connection.

Last week, I posted a photograph of my mother at what I thought was Jones Beach and she corrected me saying that it was Rockaway Beach. Her parents lived in Queens at the time and Rockaway Beach is a neighborhood on the south shore of Long Island in the borough of Queens.


This Friday's Photo, also at Rockaway Beach, is one that once belonged to my mother-in-law, Doris Staubach Quinn. Doris is at the top left, looking so very glamorous at the beach. At the time, Doris lived in Manhattan with her mother and was working in an office. It is thought that these are co-workers as some of these women have been found in other photos from office events or parties.

John is a common name in the Hairston family.  My great-great-grandfather, John Lewis Hairston, born about 1812 in South Carolina, is easily confused with a few other John Hairstons of the same generation.

My focus today is John Hairston who was born March 22, 1811 in South Carolina. He is frequently confused with my great-great-grandfather, John L. Hairston, and some part of his life often shows up in John L.’s online family trees.  Ed Bregenzer, one of the compilers of The Hairston History, contacted me in February of 2000 as he thought that I was a descendant of this John Hairston (#30).

I am referring to this John Hairston as (#30) as this is the 30th week of my 52 Ancestors in 52 Weeks challenge and this will help distinguish him from my great-great-grandfather who I will refer to as John L.

Three similarities found in the table below show why these two John Hairstons are so easily confused.

John Hairston (#30 with no known middle initial) married Syrene Thompson on October 5, 1835 in Montgomery County, Alabama.  By the 1840s, he was serving as a Justice of the Peace in Macon County, Alabama.

In 1850 and 1860, John Hairston (#30) was living in Macon County, Alabama with his wife Syrene and children. As Justice of the Peace, he took a statement from Sarah McElhaney Hairston (probable mother of my John L. Hairston) for a pension request in the year 1854.

middle initial of “L.”  Only in online family trees do you see this “L.” On all court, census, and other records found, his name is simply “John Hairston.”

If you have a John Hairston in your family tree at Ancestry.com, FamilySearch, or some other site, check your tree to determine if you have combined facts from more than one John Hairston. It is easy to do.  If #30 is YOUR John Hairston, please contact me. I have more to share. 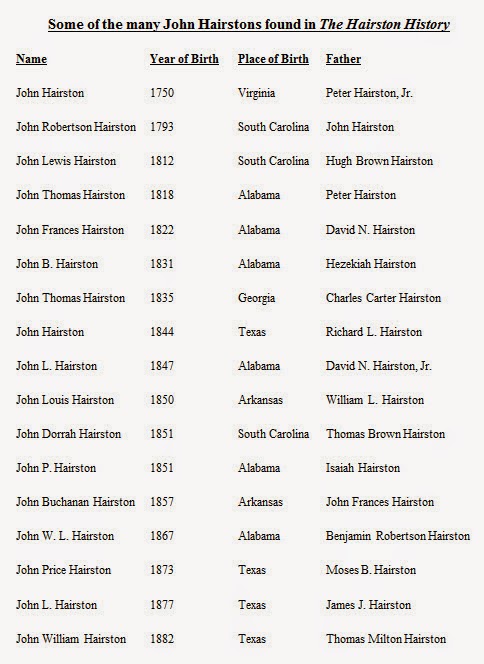 Friday's Photo: At the Beach 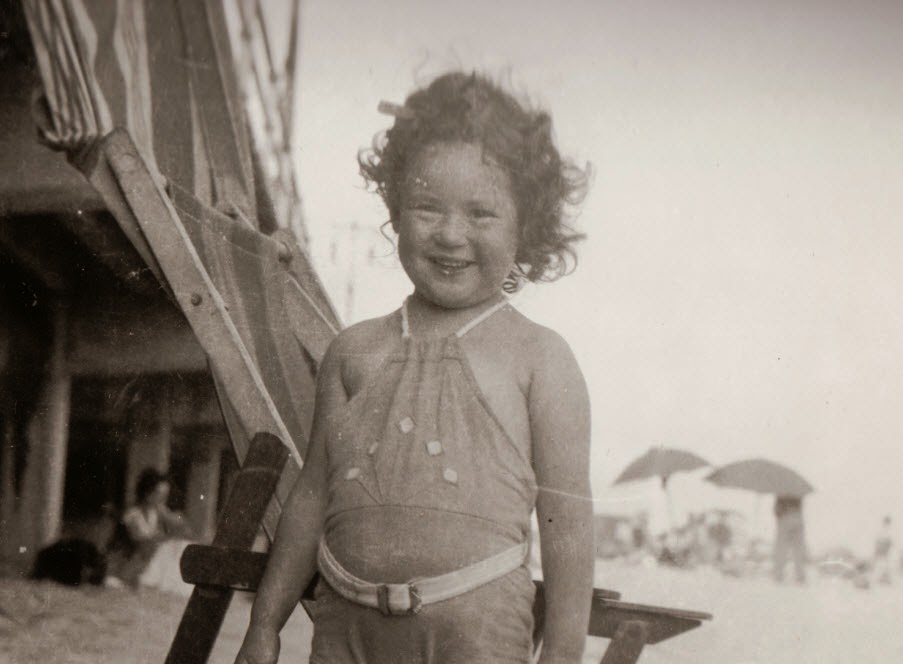 Just a quick summertime post!! This is a photo of my mother in 1935. I assume that this is Jones Beach on Long Island and I will correct this if I am wrong. She has such a happy face.