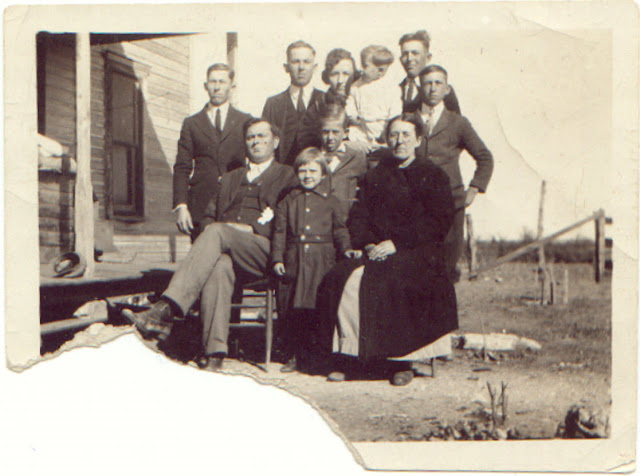 Coming up with this post was difficult. The writing prompt for #52ancesters is heirloom. Google defines heirloom as a valuable object that has belonged to a family for several generations. I am trying to relate these 52 posts to my Hairston family, but I have no heirlooms.

My father was orphaned in 1929. Most of his family's belongings were left behind in Seymour, Texas when he and his sisters made their permanent home in Borger, Texas. Whatever heirlooms existed were with Dad's sisters. When his sisters died everything went to my cousin - their caregiver.

However, the Merriam-Webster Dictionary defines heirloom as something of special value handed down from one generation to another.  So, I do have heirlooms. My cousin gave me a box of photos - the photos that sent me on this fabulous journey to find my Hairston family.

This photo of Oscar Edward Noah and his family is one of those found in the box. On the back is written, All the bunch including the grandson Hulen Stroman.

The photo was probably taken in 1921 or 1922 as Hulen was born in 1920. Many Hairston cousins have this photo. Cousin Bob, a descendant of Oscar, sent me the following labeled photo. 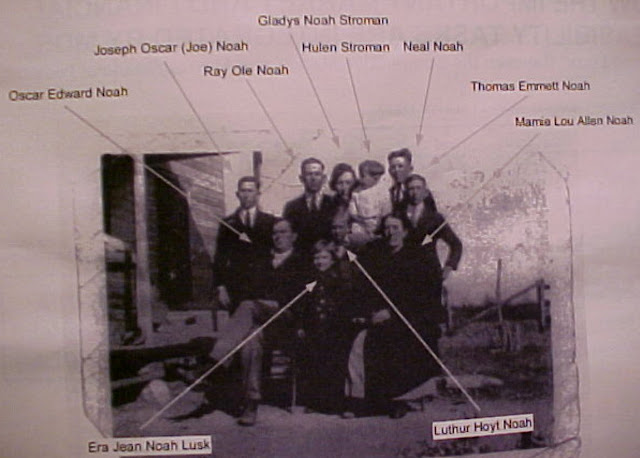 According to his obituary, Oscar Edward Noah, son of Joseph Sidney Noah and Permelia Ann Hairston, was born on March 1, 1871, in Marlin, Falls County, Texas.  His parents were married on June 11, 1865, in Hinds County, Mississippi. It is said they left Mississippi, after the war, for Falls County, first stopping in Arkansas, with Oscar's grandfather, John L. Hairston, and other extended family members including his mother's brother (my great-grandfather), Phillip A. Hairston.

In 1880, I found Oscar at age 9 living with his mother, brother, and extended family in Falls County. His father was kicked by a mule and died from the injuries in 1873. The entire family moved to Erath County in 1883. The next few years were probably very difficult for the family. Oscar's older brother and only sibling, William, died in 1884. The next year, his mother married A. J. Lackey. Mr. Lackey left the household in 1890. Permelia divorced him and took back her previous surname of Noah.

I don't know where Oscar attended school or college, but by 1892, he was teaching in Erath County for $40 monthly in the Acrey community. This community can no longer be found on maps. It was described in an 1891 issue of The Stephenville Empire as on the Fort Worth and Rio Grande Railroad, nine miles from Stephenville and six miles west from Bluff Dale.

Oscar was very active in his community and church. He was a member of the Masonic Lodge, the Democratic Club, the Anti-Baily Club and the Erath County Baptist Association. In all of these activities, he served in some type of leadership capacity.


Oscar Edward Noah was a well-educated farmer. In 1902, he served on the executive committee of Erath County's newly organized Farmer's Institute allowing farmers to hear prominent lecturers talk about farming in Texas. In 1935, he was one of 36 farmers in Erath to organize the Dublin Soil Conservation Association.

Oscar and Mamie had seven children and all are pictured above.

Oscar died at the age of 86 in 1957. Click here to see his obituary. Mamie died three years later. To see her obituary, click here. Oscar and Mamie are buried in West End Cemetery in Stephenville, Erath County, Texas.

#52ancestors: Post Seven: The Courtship of my Grandparents, Redic Bryan and Myrtie Hairston

My grandparents lived in Erath County, Texas when they met. My grandfather, Redic E. Bryan was the son of Terrell Bryan and Harriet Albritton. They came to the Stephenville area in 1878. My grandfather was 8 years old.

My grandmother, Myrtie Hairston, came to Erath County with her parents, Phillip A. Hairston and Lodema Criswell, in 1883. Myrtie was three years old. They lived in the Bethel Community (near Huckabay) along with extended family.

I was told my grandfather first met my grandmother when he purchased a horse from her father.

In 1899, I found the following and one other reference to Redic visiting Huckabay in the Dublin Progress. At the time, he was living in the town of Dublin (also in Erath County). Was he visiting Myrtie? He had Wylie relatives at Ex-Ray and Biggs family in the Huckabay area, but that "incidentally" doesn't make it sound like he was visiting family.

Redic and Myrtie were married on Wednesday, February 7, 1900. The following wedding announcements were found while searching newspapers.

Found in the Erath Appeal:

R. E. Bryan and Miss Myrtie Hairston were united in the holy bonds of wedlock one day this week at the home of the bride’s parents. Miss Hairston is the only daughter of Mr. Phil Hairston of near Huckabay who is one of Erath’s best citizens and most prosperous and well to do farmers. Miss Hairston is bright, beautiful and attractive and commands the love and respect of all who know her. Mr. Bryan, the son of Esq. Terrell Bryan, is educated, robust and handsome and numbers his friends as legion. He has grown up in our mist and those who know him love him the most. The Appeal joins their host of friends in wishing them a long, happy and prosperous life.

Found in the Dublin Progress:

Mr. Redic Bryan of Dublin and Miss Myrtie Hairston, of near Huckabay, were married at the home of the bride's parents Wednesday evening and arrived in Dublin yesterday evening on the Rio Grande train. 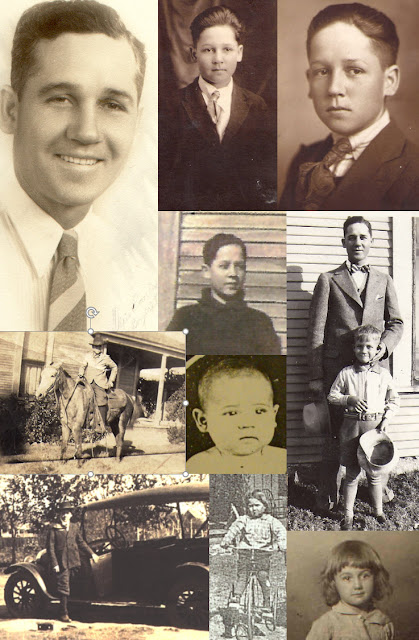 He was Buster at Seymour High School when he played tennis and won the county championship for his school. However, he was Bus when he was playing football.

He was the administrator of his father's estate in 1929 and signed his name H. B. Bryan. On a land record, his name was H. A. Bryan.

Out on his own and working as a drugstore clerk, Buster was identified as Harry B. Bryan on the 1930 census.

H. Buster Bryan and Wanda Land were married January 1, 1935, in Ector County, Texas according to the marriage record.

If you didn't have a birth certificate, did you have a legal name?

Buster died on September 15, 1940. He was working in the oil fields when an oil well blew.  He was struct by gravel causing the wounds and died of tetanus. His name in his obituary was Buster H. Bryan. On his death certificate, his name is written Hairston Albritton [Buster] Bryan.

Family photographs and documents from the collection of  Diana Bryan Quinn

From the Files of Marguerite Cook Clark: Albert Cook Bryan 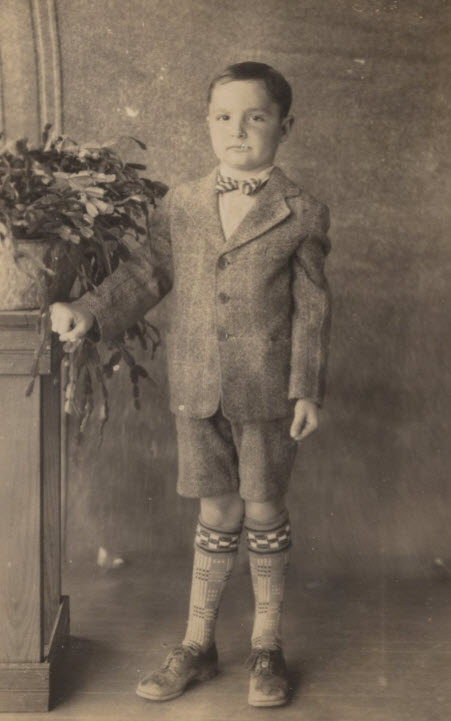 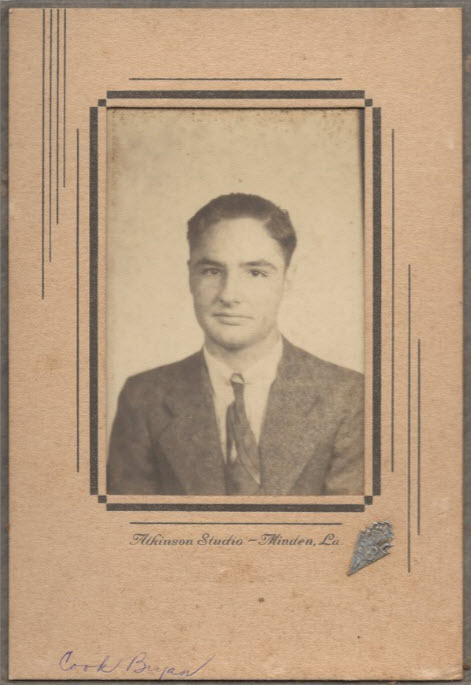 He was a graduate of Ringgold High School and attended Louisiana State University.

Research suggests the father of my great-great-grandfather, John Lewis Hairston, was Hugh Brown Hairston. He was born in South Carolina and said to be the son of John Hairston and Ann Mary Robertson. His wife was Sarah McElhaney.

Today's writing prompt for #52ancestors is in the census. My Hairstons are always difficult to find in the census as their names were frequently pronounced and spelled in many different ways. I look for Hairston, Hairstone, Hearston, Harston, Herston, Hurston, Hirston, Harriston, Hariston, Huston, Haistin, Hairstin, Hairsten, Haston, Hanston, Hainston, and sometimes even Houston.

The following census records are thought to be that of the Hugh Brown Hairston family.

In 1820, H. B. Hearston lived in Elbert County, GA. The census listed two Free White Persons over the age of 25 and six Free White Persons under the age of 16. Children known to have been born by 1820 were James McElhaney, John Lewis, William T., and Rebecca. The remaining two children are unknown to me. They may be siblings, but could also be cousins or family friends.

The 1830 census for Butts County, Georgia revealed that Hugh B. Hirston was living with eight other persons. He and one female were between the ages of 40 and 49 while the other seven were all listed as Free White Persons under the age of 20. The seven, under age 20, might be John Lewis, Samuel B., Jane, Rebecca, Vinson, William T., and Robert.

Revisiting my source, the printed version of the Hairston Family History sent to me in 1999, I realized it was not written that Hugh Brown Hairston was found in the 1840 census. It states he was living in Henry County in 1840. There could be land or other records. I shouldn't have assumed he was found on the census records.