Another Name in Question: Terrell or Terrel Bryan

After my last post, I reviewed my information for Terrell Bryan, my great-grandfather.  His wife had spelled his name with one "l" and all these years, I had been spelling it with two. So, how should I spell his name in my family tree?

Here is what I found:


My conclusion is that Harriet misspelled Terrell's name and that his name should be written as Terrell. With the exception of Harriet's misspelling, all other spellings of Terrel were not written by Terrell or anyone who was close to him.  Recordings in the bible records, his letters to the editor, and the letter from his half-brother all occurred during his life-time. He or close family members recorded this information and it should take precedence.

So, to my brother - you don't need to change the spelling of your middle name!

How do you spell that name?

I have been absent from posting the past week as I am trying to add my family tree to Ancestry.com.  I thought that I would finish in a week or so, but it's been over a month and I am still working.  I have put a lot of time into the tree and decided that, just as my family research, the tree will never be finished.  So, hopefully, by tomorrow, I will have my unfinished tree posted.

As I was adding information about my great-grandmother, Harriet Albritton Bryan, I wondered if her name was spelled with one "t" or with two.  Family researchers spell it both ways.  I have been using one "t" in my family tree, but find it very easy to add that second "t."

I decided to go back to the original source, Harriet Albritton Bryan.  After my great-great-grandfather's death, Harriet signed the "Partition of Slaves" portion of the estate settlement for her husband, Terrell Bryan, while he was serving in the Confederate Army.

A  look at the above signature left me undecided as it could be one "t" or two.  My next closest resource would be Terrell and Harriet's family bible. As you see below, it was written with one "t" for both her birth and death entries.

So, for my family tree, Harriet will be spelled with one "t." However, do you see my other dilemma? Harriet wrote Terrell's name with one "l." I have always used two. . . . 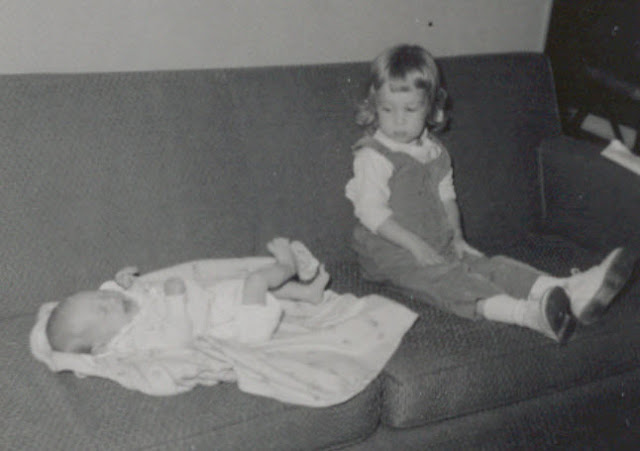 I guess that I didn't know what to make of you at first, but you grew up to be a wonderful brother! Happy Birthday!!! 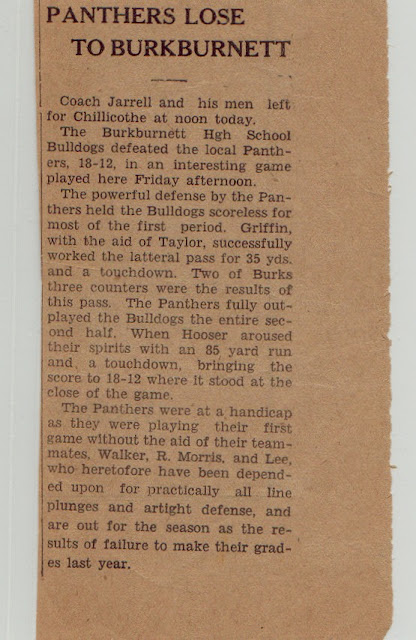 This clipping about the Seymour High School Panther's Football team was found in my family's old Bible. I assume that this game took place prior to 1923. Two of my aunts were graduates of Seymour High School; DeRay Bryan in 1920 and Marie Bryan in 1921. My uncle Hairston "Buster" Albritton Bryan graduated from SHS in 1923 and he played football. I saw a picture of Buster in his school yearbook - in the football team picture, he was called "Bus."


The obituary below was found in the Stephenville Tribune. Laura L. Bryan Keith was my grandfather's (Redic Bryan) youngest sister. Laura died from complications of Typhoid Fever. The above funeral notice was found in the Bible that once belonged to Terrell and Harriet Bryan, my great-grandparents.

Mrs. Harve Keith died very suddenly Saturday at her home in Dublin after a very short illness. No one was expecting her illness to result seriously and her death came as a great shock to her friends and relatives in Stephenville and Dublin.

She had always enjoyed good health and no one ever dreamed that the death angel would issue a summon for her to lay aside earthly cares and return to Him who made life possible. She was of a very amiable disposition; and had won quite  a coterie of friends, and will be sadly missed from her accustomed place among them.

She was but little over 30 years old and leaves a husband and two small daughters. The remains were buried at the West End in this city Sunday, the Rev. J. P. Gilliam conducting the services. His reference to the aged father and mother, Mr. and Mrs. Terrell Bryan, the husband, and two little motherless girls was exceedingly affecting, and brought tears to almost everyone who stood near the sound of his voice.

Her untimely death not only brings dissolution to a once happy home, and robs two little girls of a mother’s watchful care and devotion, but also falls heavily upon the father and mother as she seemed to be their idolized child.
From the Stephenville Tribune –back page – July 24, 1908

In the same issue – Reddick Bryan of Big Springs came in Monday. He received the telegram too late to get here in time to attend the funeral of his sister, Mrs. Harve Keith. He spent a few days here with his parents, Mr. and Mrs. Terrell Bryan. 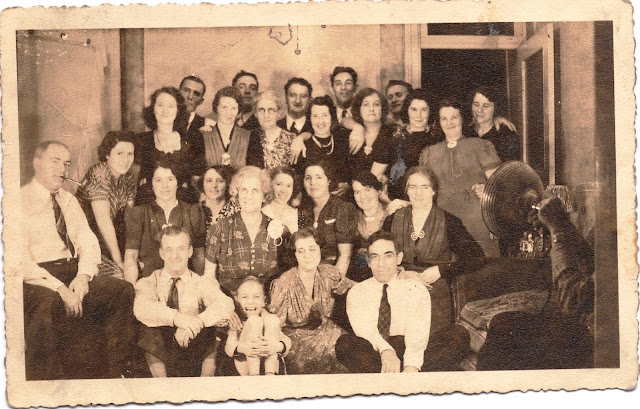 This picture was one found with my husband's many family pictures. I never thought that anyone in the group could have been identified. However, a visit to my husband's Aunt Kitty was all that it took.  William Joseph Quinn II is on the far left with the pipe in his mouth and his wife, Susan Murray Quinn is next to him directly facing the camera.

When and where was this taken? Was it the 1940s or 1950s? Are these neighbors, friends, family or a combination? What was the occasion? Although I would be very surprised to find the answers to those questions, I do know that it was definitely a special occasion as everyone is dressed nicely. Note that there is only one child in the picture and to the very left, you can see a chair or couch and someone holding the flash. 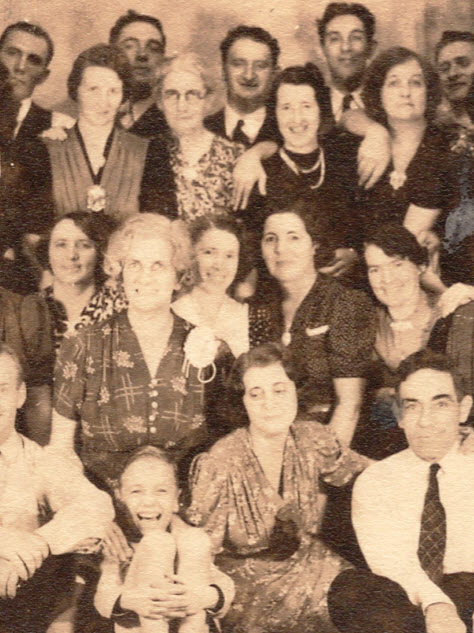 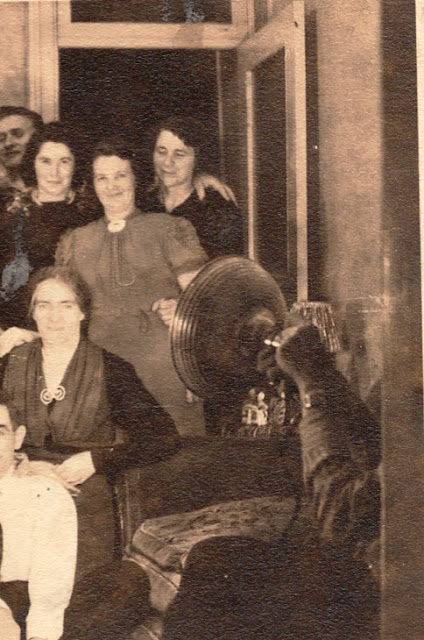 The son of the late Patrick J. Sr. and Julia (Murray) Moylan, he was the husband of Theresa (Carty) Moylan. Mr. Moylan lived in Sparta before moving to Panther Valley, Allamuchy Township, five years ago. He was a bus driver for the New York City Transit Authority for 30 years, retiring in 1977. He was a member of Our Lady of the Mountain R.C. Church in Schooley's Mountain, Long Valley. Mr. Moylan was a veteran of the U.S. Army, serving from 1954-1956.

Mr. Moylan is survived by his wife, Theresa, at home; his sisters-in-law, Eileen Curran and her husband, Patrick, of Lynbrook, N.Y., Mary Haynes of Congers, N.Y. and Phyllis Carty of Sparta, N.Y.; a brother-in-law, Tom Carty and his wife, Charlotte, of Southaven, Miss.; and many nieces and nephews.

A funeral service will be held on Tuesday at 10:30 a.m. at Our Lady of the Mountain R.C. Church. Visitation will be held on Monday from 2 to 4 and 7 to 9 p.m. at the Cochran Funeral Home, 905 High Street, Hackettstown. Interment will take place in Tranquility Cemetery.

In lieu of flowers, the family requests that memorial donations be made to St. Jude Children's Research Hospital.

Published in The New Jersey Herald on August 2, 2009 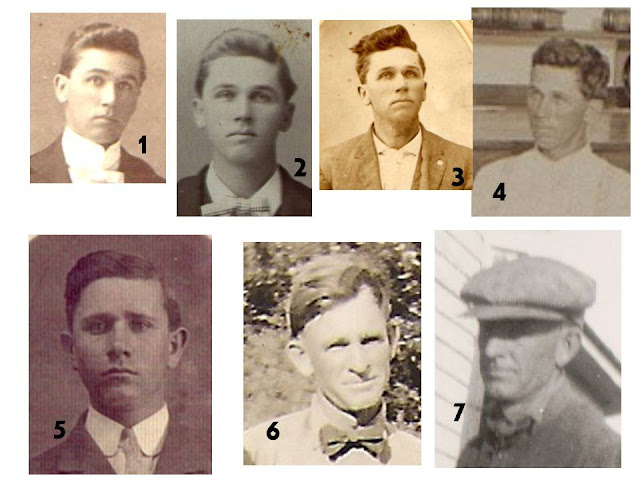 The top pictures (1 to 4) are my grandfather, Redic E. Bryan. I never knew this grandfather as he died 26 years prior to my birth. I believe that the bottom three pictures are also my grandfather. Tell me what you think. 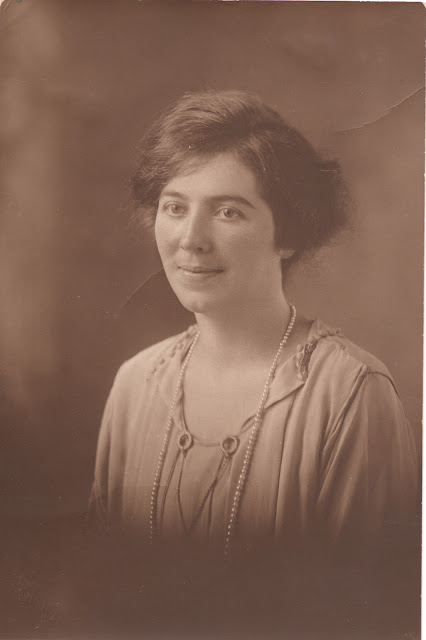 NEWPORT NEWS - Susan Mary Quinn, age 98, died Monday, Nov. 14, 1994, at Riverside Convalescent Center. She was a native of New Quay County Claire, Ireland, and was a Peninsula resident for the past five years, having come from New Jersey.

The family will receive friends from 7 to 8:30 p.m. today at Weymouth Funeral Home, where a prayer service will be held at 7:30 p.m. A Mass of the Resurrection will be conducted at 6 p.m. Wednesday at St. Jerome Catholic Church by Father James Ditty. Interment will be in Mount Carmel Catholic Cemetery in Tenafly, N.J., on Friday.

Susan Murry Quinn, my husband's grandmother, was the youngest of eleven children born to James Murray and Celia Linane. She was born in February of 1896* in New Quay, County Clare, Ireland. Her name was recorded as Susanna on her birth registration, but was called Susan or Susie.  She came to New York City aboard the S. S. Carmania from Liverpool on September 4, 1921 and worked as a domestic until she married William Quinn in 1926.

*Her exact date of birth has not been determined. However, she was baptized on February 6, 1896 and at that time a child was baptized as soon as possible after the birth so I would assume that she was born on February 5 or February 6.  Her birthday has been seen as February 7 and February 15 and family members reported celebrating her birthday on both February 10 and 14.