My Not Quite Precisely Organized Binder System. 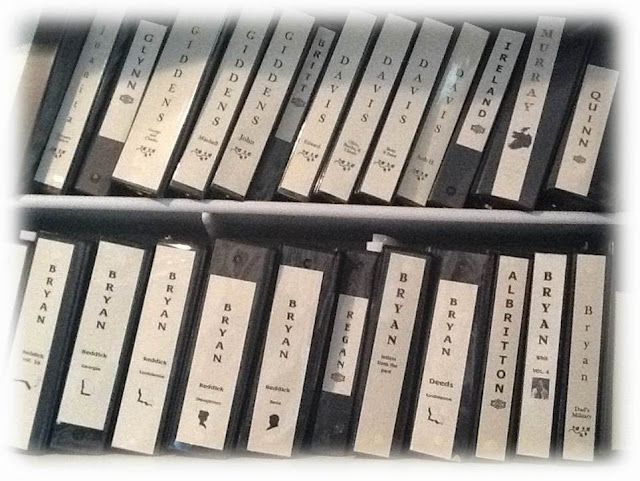 My father  had  all of his genealogy finds and correspondence in a one inch binder.  So, thanks to Dad, when I began my research, I chose binders over files. But, I had the Internet so my binders grew quickly. It was 1998 and I was printing every email and all possible clues.

I now have two long shelves filled with binders in my office closet. My system is very simple, but not very precise.

Some of my families fit into one binder. Other families have binders for each generation. My great-great-grandfather, Reddick Bryan, lived in NC, GA, and LA. He has a binder for each state, a binder for copied Louisiana deed records, a binder for information about his daughters and another binder for his sons.

If there is more than one generation or family name in a binder, I use page separators to divide the information, but that is the extent of my organization. There are no numbers or color coding and there is no specific order.

This works for me as it's an easy and quick way to sort and store. And, I spend more time researching and less time filing.

The big disadvantage of using this "not quite precisely organized binder system" is that you might have to search the entire binder to find one item. For me, this is usually a benefit rather than a disadvantage. It gives me the opportunity to look at forgotten items and to consider new possibilities for research.

One last note - Thanks to the influence of Susan Peterson, at The Organized Genealogist, I am trying reduce my paper and, in turn, reduce the number and size of my binders. As I use a binder, I am now purging unnecessary items, duplicates, and anything that has been saved to my computer. Someday, I will have one binder per family; each containing only original and very important documents and photographs. All other items will be organized digitally in my "not quite precisely organized folder system."

Friday's Photo: Out for a Ride

This is my father, Whit Criswell Bryan, in the early 1920s. I am certain that this picture was taken in Texas. Dad lived in Seymour, Texas at the time. What is he riding?

Last week, just after finishing the rough draft of this post, Randy Seaver posted Have You PostedYour Genealogy Research on the Internet? I Practice PMGDOE! He said it first - "Post My Genealogy Data Online Everywhere"

Well, my genealogy research is just about everywhere - on my website and blogs, on message boards, at Ancestry.com, on Find a Grave, and on Facebook. Many other genealogists have posted my genealogical research on their sites and trees; some with credit and some not.

I have been posting my information online since 1998 and don't plan to stop. Here are my top five reasons for sharing on the Internet.

Finding Family -  I have a small family and grew up living away from any extended family. Many distant relatives found me through my websites. Using my blogs and social media for genealogy helps us to continue a dialogue.

Collaboration - Family members, who find me on the web, share photos, family letters, history and more. Some will even correct my mistakes.

Helping Others - Newbies won't have to look hard to find information about my families. Future generations will have a lot to begin with. Even if my blogs and website disappear from the web, my information has been copied by so many that it is sure to survive for many future generations.

My Estate - I am no longer worried about what will happen to all of my research. It will be online. My children will inherit many old photographs, some original documents, and my digital files. They will not have to deal with piles and boxes of papers.

So thank you to Randy for suggesting that we PMGDOE and spread the genealogy wealth.

Seaver, Randy. (2013). Genea-Musings: Have You Posted Your Genealogy Research on the Internet? I Practice PMGDOE!. Genea-Musings. Retrieved July 24, 2013, from http://www.geneamusings.com/2013/07/have-you-posted-your-genealogy-research.html

Carrie's husband died in 1918 and she worked to support her family. Carrie died in 1937. She is buried in St. Raymond's Cemetery in the Bronx.


Charles William Giddens, my grandmother's brother, was my Great Uncle Charlie. He was born on December 2, 1892 in Crewe, Virginia, but by 1896 was living with his family in Phillipsburg, New Jersey. At the time of this photo, his father, Charles A. Giddens, was working as a laborer and the family lived at 182 West Mercer Street.

This photo was taken at Greisamer Studios in Phillipsburg. Charles had siblings Elizabeth, Florence, Edith, Warren, Georgie, and John; however, this is the only childhood photograph that I have seen from this family.

I wrote about Uncle Charlie last year, at this time, as he made national news when loading dynamite into a cannon. Read Monday's News: Dynamite to find out more about this story.

Uncle Charlie served in both WWI (in the Army) and WWII (in the Navy). Read
Friday's Photo: Honoring Those Who Served, to find out more about his military career.

Celebrate the 4th and Honor Those Who Served


So today, think for a moment about those ancestors who fought so hard for independence and what we are celebrating.

Moss, B. G. (1992). Roster of the patriots in the battle of Moores Creek Bridge. Blacksburg, S.C.: Scotia-Hibernia Press.