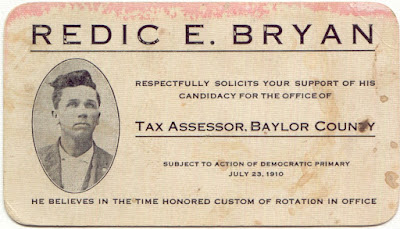 Redic Eli Bryan, my grandfather, died 26 years before my birth. Dad remembered some facts, but most of what he knew had been relayed to him by his older sisters. Almost all that I know about my grandfather came from local newspapers.

Redic E. Bryan was born in Louisiana, but moved to Erath County, Texas with his family at the age of eight.  He attended school in Stephenville and upon completion, acquired a first grade certificate and taught for five years in that county.

Redic moved to Baylor County in 1905. He left Baylor County in 1907 for Big Spring, but returned in 1909.  Redic served as tax assessor in Baylor County for two terms. He attended the Baptist Church and was a member of both the I.O.O.F. and the W.O.W.  He didn’t appear to like farming and sold produce after selling his farm equipment.  In 1914, Redic purchased his first automobile. He was a frequent buyer and seller of real estate and he and his family seemed to move often.

All of the above information and much more came from reading old newspapers. Last summer, during my visit to the Briscoe Center for American History in Austin, Texas, I learned a few additional facts about my grandfather. The following items, from The Erath Appeal, tell more of Redic Bryan's story.

July 14, 1898
Redic Bryan had the misfortune Monday night to have a wagon run over his leg below the knee, fracturing the larger bone.

July 28, 1898
Reddick Bryan is still detained at his fathers on account of his injured leg.

August 25, 1898
Reddick Bryan is at his old post behind Lon Latta’s bar again after five weeks absence, caused by the fracture of his leg, his many friends are happy to meet him. His is popular, genial, and affable, and the right man in the right place.

December 1, 1898
Temp Creswell is now dispensing drinks over Lon Latta’s bar, and knows how to treat customers of this popular house. He is the right man in the right place.
Redic Bryan, who has been at work for Lon Latta for some time is now out recuperating. His many friends will miss his smiling face behind the bar.

February 9, 1899
Redic Bryan, the popular caterer of Dublin, was in the city Monday shaking hands with his many friends. Redic is now feeding the boys and will be pleased to have his friends call on him when in Dublin.

March 23, 1899
R. E. Bryan was over from Dublin Friday and visited his father, Esq. Terrell Bryan, who has been quite ill. Mr. Bryan is improving.

R. E. Bryan and Miss Myrtie Hairston were united in the holy bonds of wedlock one day this week at the home of the bride’s parents. Miss Hairston is the only daughter of Mr. Phil Hairston of near Huckabay who is one of Erath’s best citizens and most prosperous and well to do farmers. Miss Hairston is bright, beautiful and attractive and commands the love and respect of all who know her. Mr. Bryan is the son of Esq. Terrell Bryan, is educated, robust and handsome and numbers his friends as legion. He has grown up in our mist and those who know him love him the most. The Appeal joins their host of friends in wishing them a long, happy and prosperous life.

August 16, 1900
Redic Bryan was among his Stephenville friends Saturday, making merry and pleasant the hours spent with him.