100th Anniversary of the Founding of the Irish Volunteers

Today is the 100th anniversary of the founding of the Irish Volunteers. This took place at the Rotunda in Dublin and 7,000 people are reported to have attended the first meeting.

Nancy Ellen Davis, was a daughter of Seth H. Davis and Margaret "Peggy " Jones and sister to my great-great-grandmother, Olive Caroline Davis.  She was born August 22, 1844. At age 19, she married Henry Page in Edmonson County. In 1870  Nancy and her husband lived in Hardinsburg, Breckinridge Kentucky with son George, age 2.

In 1880, they continued to live in Breckinridge County with son George, then age 11. Henry Page was working as a teamster.

In 1900, Nancy Ellen "Ellen" was living very near her brother, Larkin Davis, in Rocky Hill Station, Edmonson County. Her marital status was divorced and she reported that she was the mother of two children and only one was living.  Her son, George, and his wife, Clara Saunders, were living in Warren County, Illinois and working as servants

In 1910, Henry and Nancy Ellen were living together - their status was married. Again, it was reported that Nancy Ellen was the mother of two children, but only one was living. Her son, George, and his family were living in Galesburg, Knox County, Illinois.

On February 24, 1912, Nancy Ellen and Henry moved to the Illinois Soldiers and Sailors home in Adams County. They remained in that home until their deaths; Henry in 1917 and Nancy Ellen in 1932. They are buried in Sunset Cemetery in Adams County, Illinois. 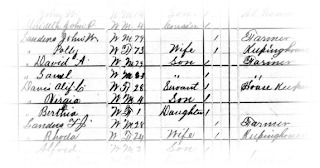 One very interesting item was found while looking for Nancy Ellen and her family. A death certificate for a Virgil L. Page, who died August 2, 1937,  names Henry Page and Ellen Davis as his parents. Virgil was born on November 11, 1875 and was not living with Henry and Nancy Ellen in 1880. He would have been four at the time of the census. Remember that Nancy Ellen was reported as to having 2 children with only one living in both 1910 and 1900. The living child would have been her son George W. Page. However, Virgil was also living. Was Virgil an adopted son? Could he be "Virgia," the son who was living with Olive Caroline on the 1880 census?

I was in third grade when President John F. Kennedy was so tragically killed 50 years ago. I remember arriving home from school and, as I got off the bus, another child was standing at the bus stop announcing the news.

The photograph of the president's first grave site was taken with my "World's Fair" camera in the summer of 1966.

This initial grave site was 20 feet by 30 feet and was surrounded by a white picket fence. After more than 16 million visitors to Kennedy's grave site in three years, it was determined that a larger plot was needed. To honor the memory of the president, 3.2 acres were set aside for the grave area and accommodations for the visiting public.

Friday's Photo: Another Picture of Harriet 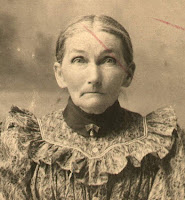 Last week, my distant cousin Jane sent me this copy of a tintype in her family's collection. There are no identifying marks; however, I have no doubt that this picture, which has to be over 100 years old,  is another of Harriet Louisa Albritton Bryan, my great-grandmother.

Thank you, Jane, for sharing!

Photograph used with permission. From the collection of Jane F. Aebersold.
Posted by Diana at 11:57 PM 1 comments

Find More Than Names and Dates at Ellis Island.org 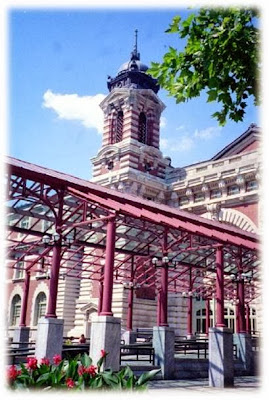 One of my favorite places to visit in NY, Ellis Island, reopened last month. It was damaged last year, on October 29th, by Hurricane Sandy. Read about the damage by clicking here. According to the blog, Heartbreak & Hope: Stories of Ellis Island, visitors will have access to the main building and the wall of honor. More areas will reopen as repairs are completed.

You can find so much more than names and dates when reading ship manifests at Ellis Island. org. While looking for my husband's Murray family, I found physical descriptions, addresses, family names and relationships.

My husband's grandmother, Susan Murray, came to the United States, through Ellis Island, on September 4, 1921.  She was the last of the six Murray sisters who came to the United States. She and three other sisters came through Ellis Island.  Susan arrived on the S.S. Carmania from Liverpool. She named her father as J. Murray, her age as 22, her place of birth as New Quay, and her final destination was the home of her sister, Kate Murray, in Westchester, New York.

Catherine "Kate" Murray, who later married Peter McGing, sailed from Queenstown, in Ireland, on the S.S. Carmania on April 12, 1911 and arrived on April 19, 1911.  Her age was listed as 19 years. Her destination was NYC and she was going to stay with her sister Ellen in New York. She was 5'5'' with a fair complexion, fair hair and blue eyes.  Kate’s last residence was listed as Burren and she listed her father, James Murray of Burren, County Clare as the nearest relative in Ireland. 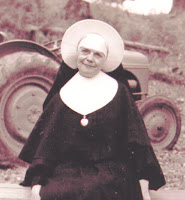 Ellen Murray, age 17, arrived in the US on April 17, 1908 from Queenstown aboard the S. S. Mauretania.  She was 5 feet 7 inches tall with a dark complexion, black hair and brown eyes.  She states that she was planning to stay with her sister, Sarah Murray at 428 St. Nicolas Ave., NYC and that she had previously lived in Burren, County Clare.

Sarah Murray was 20 years old when she arrived at Ellis Island in NY from Queenstown aboard the Ivernia on May 6, 1903. She could read and write and her occupation was listed as servant.  She stated that she would be going to Dubuque, Iowa to live with her sister, Delia Murray, at 1428 Lockes Street.  I don't know if Sarah ever went to Iowa as by 1908, she was living in NYC.

Today is Veterans Day, a day that we honor our veterans. Veterans Day, originally Armistice Day,  began after WWI to honor those who fought in "The Great War." In 1954, November 11th became Veterans Day, an official United States holiday, honoring all armed service veterans.

For more information visit History of Veterans Day at the United States Department of Veteran Affairs.

Today, I am posting a list veterans from the various branches of my family tree; many who did not serve in traditional U. S. armed forces. Most served during wars and some volunteered while others did not.  I have added to the list from my 2012 post and will add to the list for 2014 as I find more. If you know of others, please comment below or send me an e-mail.

*I didn't know if I should include my ancestors who fought in the Confederate States Army, but found the following at the Sons of the Confederacy website:

"First, and most significant is the fact that by Public Law 85-425, May 23, 1958 (H.R. 358) 72 Statute 133 states –“(3) (e) for the purpose of this section, and section 433, the term ‘veteran’includes a person who served in the military or naval forces of the Confederate States of America during the Civil War, and the term ‘active, military or naval service’ includes active service in such forces.”

"As a result of this law the last surviving Confederate Veteran received a U.S. Military pension until his death in 1959, and from that day until present, descendants of Confederate veterans have been able to receive military monuments to place on graves from the Veteran’s Administration for their ancestors. A Confederate Veteran should therefore be treated with the same honor and dignity of any other American veteran."

Friday's Photo: Do You Know This Man? 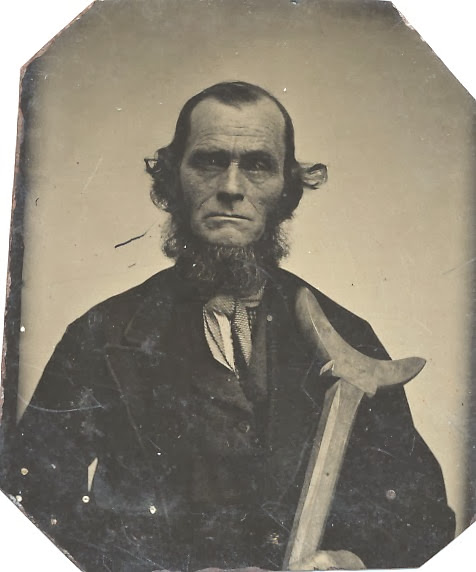 This interesting tintype was sent to me by a descendant of Dorothy Elizabeth Harriet "Dollie" Bryan and Thomas Sumter Wylie.  Dollie was my grandfather's sister and a daughter of Terrell Bryan and Harriet Albritton. Tom Wylie was the son of Samuel K. Wylie and Maria H. McNeil.

This could be a Bryan or Wylie family picture. The chances of identifying this person are probably slim, but there is always the possibility that someone will have an identical picture along with a name.

Photograph used with permission. From the collection of Jane F. Aebersold.