From the Borger Herald - Whit Criswell Bryan, my father. Although the exact date of the clipping is unknown, it is probably in the fall of 1941. Dad was transferred to the Mobile Naval Hospital at Pearl Harbor on December 1, 1941. 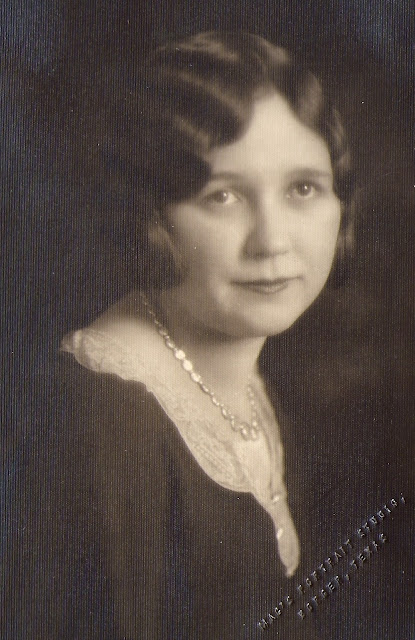 Monte DeRay "DeeDee" Bryan was my father's sister. She was born in Erath County, Texas, but raised in Seymour, where she graduated in 1920 from Seymour High School. DeRay taught school in Borger, Texas at the time of her father's death in 1929 and at age 25 years old became  the primary wage-earner for the family. She supported her older sister, Marie, and took on parenting responsibilities for my father, age 8 and her younger sister, Willa Mae, age 15.

A retired medical secretary for Dr. Hamra, she was a native of Stephenville, Texas, and a Borger resident since 1926.

She was a member of the First Baptist Church, Duplicate Bridge Club, and one of the first school teachers in Borger.

She is survived by one sister, Willa Mae Dudley of Borger; one brother Whit Bryan of Virginia Beach, Va.; one niece, Jacquelyn Skinner of Denver, Colo.

Burial will be under the direction of Minton/Chatwell Funeral Directors.

Survivors include one sister, one brother, one niece.
Borger News Herald, August 18, 1987

How Tall Were Your Ancestors?

I've just returned from a research trip with my distant cousin, Sharon.  We were discussing the height of some of our family members. My father was 6'2" and, his first cousin (Sharon's grandfather), Monte Hammett, was 6'4"

My uncle, Hairston Albritton "Buster" Bryan, was described as tall in his high school year book. My father told me that his father was very tall and from this picture, taken in the Baylor County Courthouse, it appears to be true.

So, how tall were other family members? What did they look like? We don't have photographs of many of our ancestors, but can find information about height, weight, eye color, hair color, and even skin tone at a variety of free and paid resources. Below are some of my family finds and a few of the resources that you can use to find more about your family members.

U.S. WWI Draft Registration Cards 1917-1918 are free to browse at FamilySearch.org or search by name if you have a subscription to Ancestry.com.  Some cards contain the actual height while others give the classification of short, medium, or tall. These cards may also tell weight, skin tone, and hair and eye color.

U.S. Passport Applications can be found at Ancestry.com

U.S. WWII Draft Registration Cards, 1942 can be found at both FamilySearch.org and Ancestry.com


Don't forget to look at other records that you may have. Health, school, pension, military, and other personal records may give a descriptions of your ancestors.

I have a lot of old pictures that need names. Every few years, I pull out the pictures to look for more clues.  I have had this picture of a woman in black since the late 1990s.  My father thought that it might have been one of his teachers or a teacher friend of his sister, DeRay. So far, no one had claimed her.


So. . . . . in June, I was going to the Southern California Genealogy Jamboree. One thing on my to do list was to see Maureen Taylor, a photo expert.  For a fee, she will look at your pictures and help to date and compare by looking at styles of hair and clothing, the type of photograph and so much more. I decided that this is one of the pictures that I would take. When I scanned and enlarged the photo, I realized that her mouth was one that I had seen before - a Bryan family trait. I went through all of the Bryan family pictures looking for that trait and I found several others - some too sad to put out for the whole world to see.


I think that my unknown picture is Dollie Wylie. Maureen Taylor agreed.  What do you think? 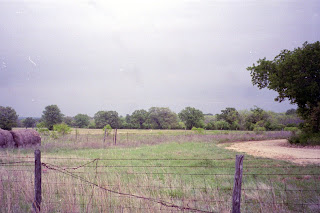 My grandmother, Myrtie Hairston moved to Erath County at the age of three in 1883. Her family settled in the community of Bethel, nine miles north of Stephenville, Texas, where her father purchased 160 acres from Robert W. Thompson.   The school at Bethel was on her family farm and she attended Baptist church services in that community.

Bethel is no longer in existence. It appears to be farmland. There’s a winding dirt road that goes up a large hill to the Bethel Cemetery.  On the way to the cemetery is the former home of Mattie Hairston Chisum Thompson; overgrown with vines and weeds, it’s now home to birds and other wildlife.  The cemetery contains graves of some family and extended family.

The following article, about the Bethel Community in 1898, was found in the Stephenville Tribune.

Old Bethel is coming out of the kinks. We have a fine school under the management of Prof. Dean Bruington, a fine literary society meets every Friday night, a pop club, a good Sunday school, singing and prayer meeting every Sunday night.

P. A. Hairston is on the sick list this week.

W. D. Mourey, who for some time past has been in Eastland county, returned Friday.

John Thompson has had an attack of rheumatism for some time.

M. W. Birdwell, our candidate for assessor, is still in the ring. We would like to see Bud nominated and elected.   X.Z.
From the Stephenville Tribune  - April 1, 1898

In 1935 she married Richard Houlihan who died Oct. 9, 1962.  She had worked for New York Central Railroad as a clerical person.

There are many inaccuracies in this obituary including the spelling of her name. Celia did not have children and died after most close family members which accounts for the errors. In all previously found documents her name is spelled Celia, not Cecelia. Church records indicate that Celia Quinn was born on April 13, 1898; the daughter of William Quinn and Bridget Brannelly. She came to the United States in 1920 and married Richard J. Houlihan on September 3, 1927.  According to cemetery records, Celia died on February 7, 1984. Her obituary states that she died on February 6. She is buried in Long Island National Cemetery which is adjacent to the Pinelawn Cemetery in Farmingdale, New York.

More about Celia Quinn Houlihan can be found on my web pages.


Elizabeth Shown Mills wrote, "Most Southern families have their tales of Princess We-no-not-who. Typically, she was Cherokee. Sometimes Choctaw or Creek. Rarely Chickasaw or Seminole. Traditionally, the tale was a whispered one, something to regale the children but not for public knowledge—at least not until the 1970s when a shift in social ideals made minority ancestry both chic and profitable."

Yes, ours was a Cherokee, but not a princess.  According to my father, "one great-grandmother was a full-blooded Cherokee." I was a young teen when Dad told this story and was not impressed.  He always had stories and I never knew what to believe.  I didn't know his family.  His parents died when he was very young and his only siblings lived in faraway Texas.

When I began researching, all great-grandmothers were accounted for except one; the wife of John L. Hairston. Her name has been said to be Eliza, but even that is debatable. I found distant cousins; Noahs, Thompsons, Greshams, and Chisums.  All had heard family lore about Native American heritage. One Thompson cousin said that her father treated it as a family secret. In an old Bryan family letter, my grandmother was referred to as "an Indian woman named Hirston."

I am waiting for my DNA test from Ancestry.com.  I am hoping that gives a little more insight to my heritage. As for proving that I am a descendant of a Native American great-grandmother, I will have to find her first. 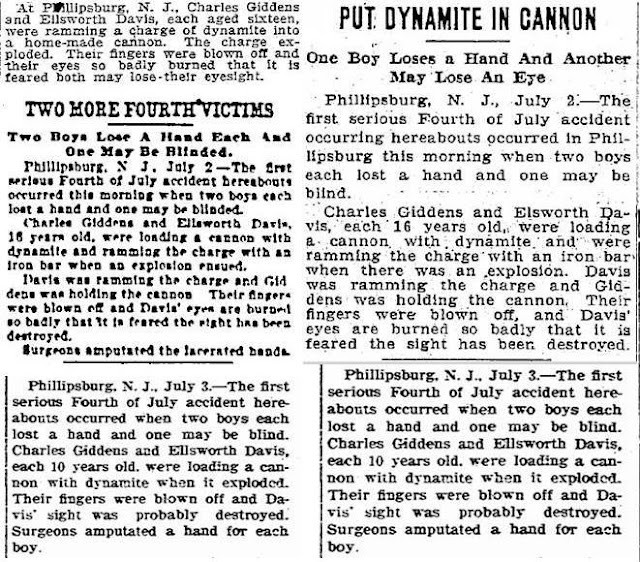 On July 2, 1909, Charles Giddens and Ellsworth Davis, both 16 years of age, loaded a cannon with dynamite and when ramming the charge with an iron bar, it exploded, injuring both boys. I don't know if the boys realized it, but it made national news and a few of the many articles* that I found are included in this blog.

The boys were injured, but not as seriously as sensationalized in the newspapers. Charles, my great-uncle, was lucky, he only lost part of a finger. He went on to serve in the Army during WWI and in the Navy during WWII.  Look carefully at the picture on the left. Part of Charles' right pointer finger is missing.

Research at Ancestry.com and Find-a-Grave, indicated that Ellsworth Wood Davis lived until 1941.  He married, had one child, and worked as a draftsman for at least two companies in or near Warren County, New Jersey.  Ellsworth's draft registration card indicated that he had a mangled hand and an enlarged ankle.

*I used my subscription for GenealogyBank.com to obtain these and other articles about this event.

I found photocopies of these obituaries for John R. Hammett, last month, when looking at genealogy files left to the Denver Public Library by my first cousin Jackie.

News has been received here of the passing   of J. R. Hammett in New Mexico on November 2, at 2:30 o’clock.

Mr. Hammett was a former citizen of this county, having lived here for 15 years before moving to New Mexico. Funeral services were conducted by Rev. Joe F. Grizzle former pastor of the Baptist church here, but now pastor in Portales.

Mr. Hammett is survived by his wife and nine children, three children having preceded him in death.  The children are Mrs. H. N. Andresees of Electra; Mrs. J. R. Mayo fo Southland; Mrs. L. E. Simons, Santa Fe; N. M.;  Mrs. J. D. King, Post; R. S. Hammett, Seamore; P. D. Hammett, Austin; H. A. Hammett, Portales;  Cecil Hammett, Amarillo and Monte Hammett of this city.  All of the children except R. T. Hammett were with their father at the time of his death.
Mr. Hammett had been in ill health for about 4 years but was seriously ill for only five days.

Internment was made in the Portales Cemetery.

Funeral services for John R. Hammett, who died early this morning, will be held tomorrow afternoon at the First Methodist Church with Rev. Joe F. Grizzle and the Rev. C. Frank York officiating. Mr. Hammett had been ill for the past four years. He came to Portales in May, 1935, from Post, Tex., where he had lived for 13 years.