I have been scanning my husband's family's pictures for several years. My favorite pictures are those that belonged to my mother-in-law, Doris Staubach Quinn, before her marriage.

Last night, the nephew of one of Doris' friends, Mary McMullan, found a picture of his aunt on my blog and contacted me. So, I thought that I would post more of her friends in hope that I will learn more! 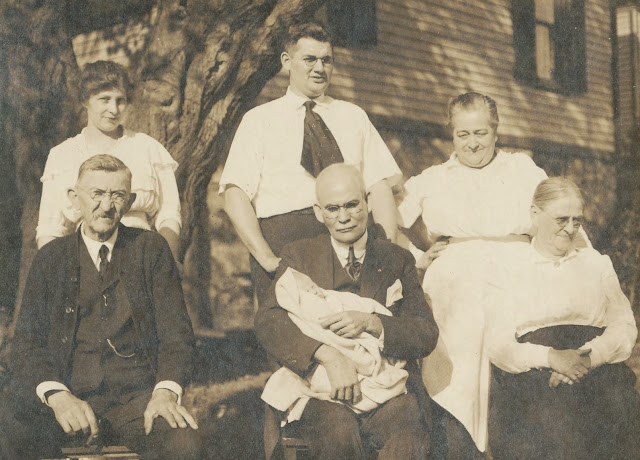 This is another picture that belonged to my grandmother, Edith Giddens Davis. The date on the back is 1917.

Pictured in the back are, Elizabeth Giddens James (sister of my grandmother), Louis Miller James (husband of Elizabeth), and Lucy Glynn Giddens (mother of Edith and Elizabeth).

Evan Thomas James is holding his granddaughter, Dorothy Elizabeth James who was born on September 14, 1917 in New Jersey. 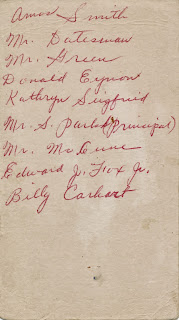 This card belonged to my grandmother, Edith Giddens. She attended Easton Academy in 1915. She would have been 18 years old. I don't know how long she attended, but she called it a "finishing school." She talked about walking across the bridge to get to Easton from her home in Phillipsburg, New Jersey. 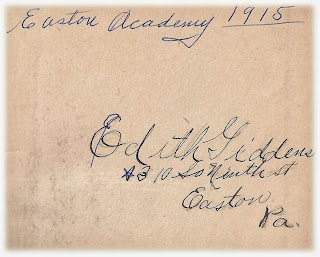 I found very little about Easton Academy on the Internet. However, did find an 1896  Pocket Map of Pennsylvania With Compliments of Samual R. Park A. M., Principal and Proprietor of The Easton Academy. The cover of this map gives some information about the academy and states that Easton Academy is formerly Trach's Academy which was established sometime before 1880.

My grandfather, Claude Davis, was born to Bertha Davis when she was 14 years old. His father is not known. I was told that he idolized his grandmother and he spent much time with her. I found the first record of his grandmother's name on Dora Davis Page's (Bertha's sister) social security application  - Olive Caroline Davis.

In 1870, Olive Caroline was not present with the Seth H. Davis family, but Oliver C. Davis, a 19 year old male was present. Next to "his" name it was checked that he was married within the year, he attended school within the year, and could not read and write. "He" and all siblings were identified as farm laborers.  I am guessing that Oliver C. is actually Olive Caroline. As I have written in other posts, we are looking at a handwritten copy of the original or even a copy of a copy when we look at a census record. If handwriting was poor or ink smeared on the original, the person copying the record may have had to make an educated guess.

"Aliff" Davis was recorded as a servant living with a Sanders family in 1880. She was single and her occupation was housekeeper. Also living with Olive Caroline was her son, "Virgia," and daughter, Bertha (spelled Berthia). Bertha was my great-grandmother. She was born May 29, 1879. Seeing a son, born about 1875, was a surprise to me as I only knew of two daughters; Bertha and her sister Dora who was born in 1882.

The fathers of Bertha and Virgia are not known by me. According to family oral history, Dora's father was a Charles Thompson. In 1880, a Charles Thompson, a widower, lived very close to the home where Olive Caroline was a housekeeper in Edmonson County.

Olive Caroline Davis was not found again until 1901 when when she married R. L. Logsdon on December 29, 1901. On the application, her father is named as Seth H. Davis.  According to the marriage record, this was Olive Caroline's first marriage.

I have a death date of May 18, 1909 for Olive Caroline Davis which was passed on to me by another family member. I have never found a record of her death and do not know where she is buried.

There are many questions about Olive Caroline and her family. Here are just a few.

Photograph of Olive Caroline Davis used with permission. From the collection of Brenda and Mike Parker. I love this picture of Dora Davis, sister to my great-grandmother, Bertha Davis. Dora, daughter of Olive Caroline Davis, was born on January 9, 1882 in Kentucky. Her mother was unmarried and her father was said to be a Charles Thompson. Dora married Joseph Thomas Page on August 29, 1895 in Edmonson County, Kentucky. They had children Hattie Mae, Fred Bryon, Olive Allena, and Albert Scott.

Dora died on June 8, 1975 in Indiana. She is buried with her husband in Lambert Cemetery in Edmonson County.