In Virginia Beach, today was the third snow day this week! We had at least 10 inches of snow and as of last night, I couldn't see the where the road began and ended in front of my house.

This is a photo of my mother (on the right) and her sister, both readers of this blog. The photo is dated 1939 and the family lived in Bellerose on 89th Street in Queens. Was school closed on this snow day? 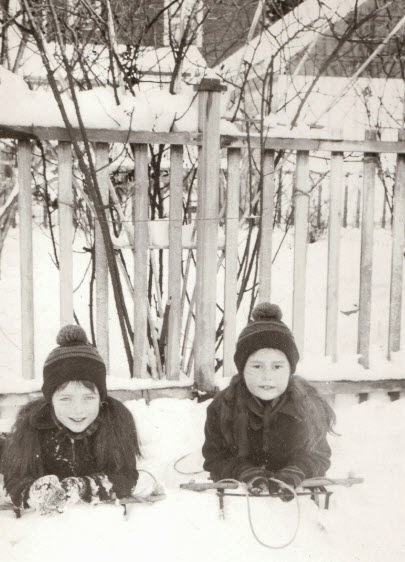 
Dad said that Marie had a speech problem and that when she was young, her father took her to Oklahoma by wagon to see a speech correctionist. She must have had other issues - maybe apraxia or cerebral palsy. I was told that she had weakness on one side.

This was found in the December 4, 1919 issue of the Baylor County Banner:   Mrs. R. E. Bryan left Sunday afternoon for Dallas in company with her daughter, Miss Marie. They are going to have an x-ray picture taken and try and determine the trouble with her speech.  It is hoped that this trouble may be located and remedied.

The following is an excerpt from a letter written by my grandmother to her cousin, she tells about plans to make the trip. I assume that Marie did not have the surgery.


Marie didn't marry. After her mother died in 1927, I imagine that she was my father's primary caregiver as all other siblings were not living at home. When Redic Bryan died in 1929, Marie and my father, Whit, moved to Borger to live with sisters DeRay and Willa Mae. DeRay and Willa Mae both worked a variety of jobs in Borger. Marie took care of the house and the cooking.

Friday's Photo: Another Picture of Dad

I found this photograph of my father, Whit Criswell Bryan, in an almost finished album last week.  I knew that I had never posted it and filed it in my memory for a future post.

However, a few days later, I found this same photograph in the January 25, 1946 issue of the Borger Daily Herald at The Portal for Texas History. Dad was stationed on the U.S.S. Adams, a destroyer, and had just left Shanghai.

As a young man who had spent his youth in small towns in Texas, Shanghai must have been a big experience. I wonder what it was like in 1946? Click on the Portal for Texas History link to read about Dad and the U. S. S. Adams.

Family photographs and documents from the collection of Diana Bryan Quinn.
Posted by Diana at 8:26 PM 0 comments


By 1929, at age nine, my father was an orphan and his sister, DeRay, became the breadwinner of the family.  Here is her story in photographs, documents, and newspaper clippings.

Last week, I accepted Amy Crow's challenge of posting 52 Ancestors in 52 Weeks. I did this knowing that I had put my genealogy away for January as I have a work project, due January 29th, that needs all of my attention. However, I just couldn't pass it up.  I really wanted a way to focus my attention on my Hairston family. I have tons of information from Hairston research that needs to be organized and this challenge will be perfect for that.

So, for the next few weeks (until January 29), my posts will be "easy" posts about closer Hairston family members. Today's post is a photo timeline about a Hairston descendant that I knew well, Whit Criswell Bryan, my father.

Transcription Errors on that Death Certificate Could Change Your Family History 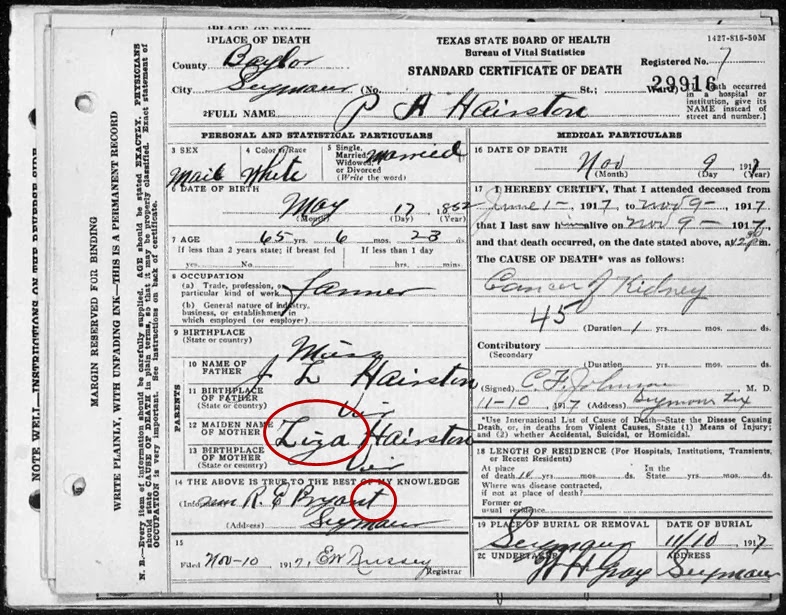 I have two copies of my great-grandfather’s death certificate. The first obtained by my father from the Baylor County Clerk’s office in the 1970s and the second, found at Ancestry.com, was digitally copied from records at the Texas Department of State Health Services.

In Texas, reports of death were completed by a county clerk, medical professional, or mortician who talked to the informant. These reports of death were filed with the county clerks or local registrars who sent the information to what is currently known as the Texas Department of State Health Services. Copiers were not common place in offices until the 1960s. So, human transcription was usually the method of making copies prior to that time.

Although, the certificate saved on my computer from Ancestry.com was the record of choice when looking for Hairston information last month, I suspect that the information that I had in my retrievable memory came from the certificate from the Baylor County Clerk.  On the certificate found at Ancestry.com (see above), I noticed that the name of my great-grandfather’s mother was written as Liza. I have seen Liza in a few family trees, but the death certificate that I remembered had her as Eliza. Looking a little more closely, I notice that the informant was Mr. or Mrs. (not legible) R. E. Bryant. My grandparents were Mr. and Mrs. R. E. Bryan.

I got out the paper copy of the certificate sent from the Baylor County Clerk and sure enough, my grandmother did spell her name as Bryan and her grandmother was listed as Eliza. Spelling and handwriting differences show that the certificate obtained at Ancestry.com was probably the transcription. I assume that it was made in Baylor County, prior to sending it to the state offices in Austin.


The errors in the transcription did not make a huge difference in my family research, but transcription errors could easily change a family tree if important names and dates are misinterpreted.  If you have questions about spellings, dates, or illegible handwriting on a death certificate, you might want to try to find another source for the record.

Postscript – For those of you researching this particular family, John L. Hairston and his wife were probably not born in Virginia. All census and other records indicate that John was born in South Carolina and that his wife was born in Georgia or Alabama. The fact that my grandmother, Myrtie, stated that they were born in Virginia leads me to believe that her father may have known about and talked about his Virginia heritage. 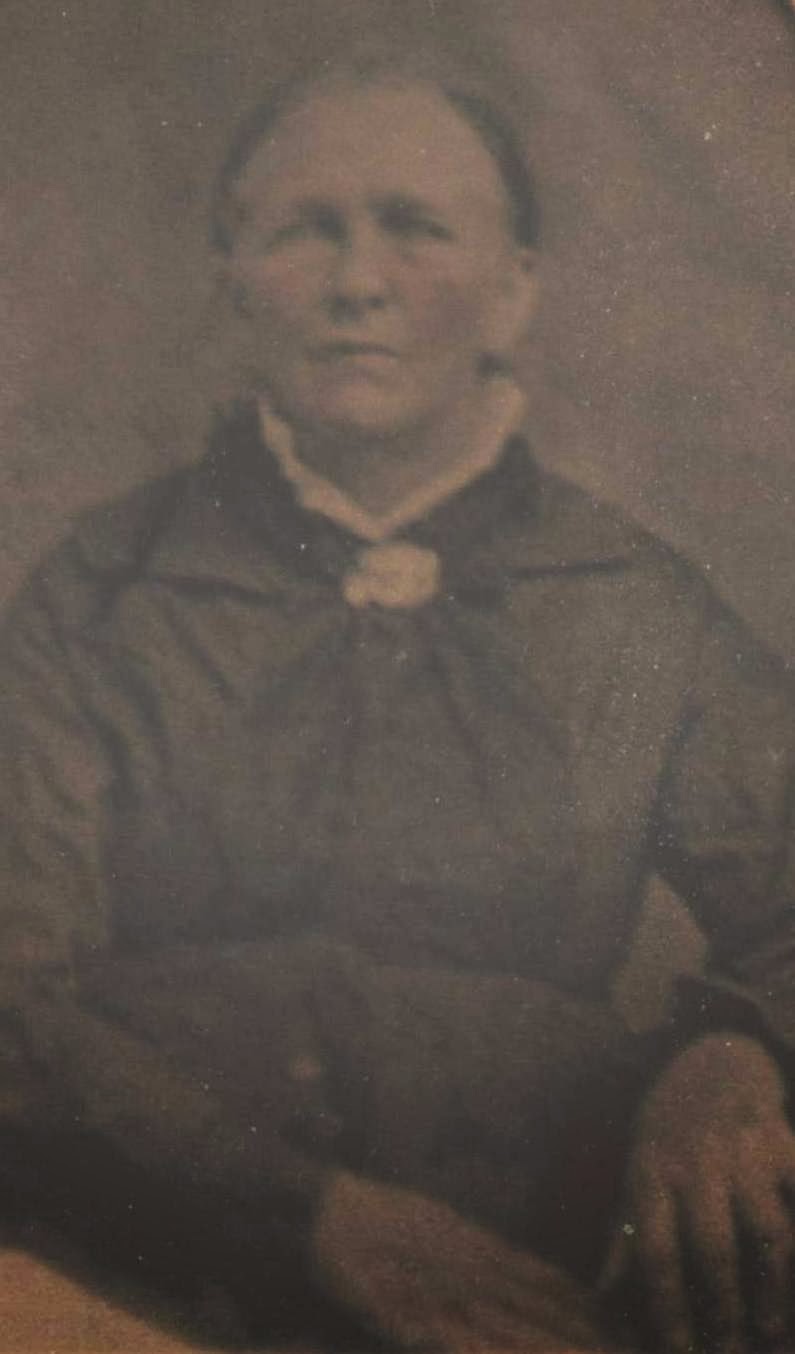 Mary Ann Evans was born on June 9, 1829 in Alabama. She was the daughter of Evan Evans and Nancy Selman. She married William Moore Criswell in Cherokee County, Texas on August 30, 1847 and was the mother to 13 children. Mary Ann "Polly" Evans Criswell died on May 31, 1883 in Falls County, Texas. She is buried in the Criswell Cemetery.

Today, I read Amy Crow's Challenge: 52 Ancestors in 52 Weeks at her blog No Story Too Small.  The challenge is to have one blog post each week devoted to a specific ancestor. I am up for the challenge. For each of the 52 Sunday's in 2014, I will be posting information about ancestors from my Hairston family tree.

My first Hairston ancestor is my grandmother, Johnie Myrtlene "Myrtie" Hairston. I never knew my grandmother or Redic E. Bryan, my grandfather. Myrtie died 28 years before I was born. I found a lot in her obituary and am quite lucky to have several photos.   Note her year of birth is incorrect. She was born July 9, 1880.

For more about Myrtie see the blog posts listed below.

Friday's Photo: A Family Portrait (a photo of Myrtie and her parents)

Friday's Photo: A New Photo of My Grandmother

Family Photos: The House in Seymour – Part III  (My father with my grandmother)

Forgotten Family – Part VI: The Painting (a painting of Myrtie)

This is the only picture that I have of my grandmother's brother, Warren Giddens. He is pictured here with his wife Calla and daughter Doris. The date under the picture is 1928. Just last month, my aunt, my mother, and I spent a nice morning with Doris and her family in not far away Williamsburg. 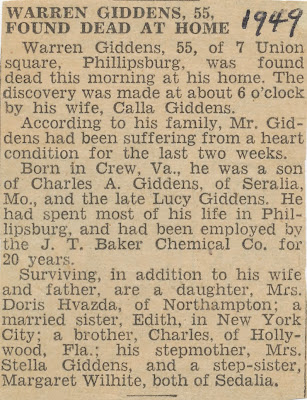