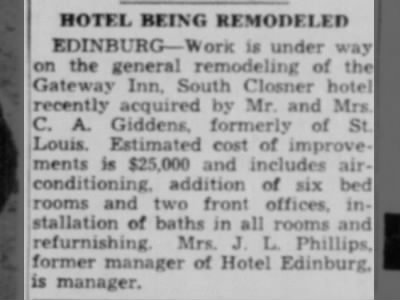 In 1947, Charles A. Giddens and his 2nd wife, Estella Giddens, left St. Louis where they owned a clothing store to become hoteliers. Hotel Giddens, at 410-412 Closner Boulevard in Edinburg, Hildago County, Texas, was formerly the Gateway Inn.

Charles and Estella remodeled the hotel and the formal opening was held on December 15, 1947. The hotel was home to visitors and small businesses.

The Edinburg City Directory published in December of 1949 indicated that Charles and Estella were living in Edinburg at 217 East Lovett Street. It was written in the directory that Charles was retired. However, Charles and Estella must have left Texas prior to the publication of the directory as they purchased land just prior to December 1, 1949 in Sedalia, Missouri where they lived their remaining years.

Last week, I posted a photo of an unknown couple that had been squirreled away on my computer since 2001. I suggested that it could be a Bryan, Albritton, Regan or Hammett.

I was contacted almost immediately by my brilliant second cousin, Jane, who said that the man looked an awful lot like a photo of Howell Albritton on Ancestry.com. Well, I won't post the photo from Ancestry as I haven't yet received permission from the owner, but the above photo of Howell is mine and was in bible that once belonged to Terrell Bryan and his wife, Harriet Albritton Bryan.  Howell was Harriet's older brother. 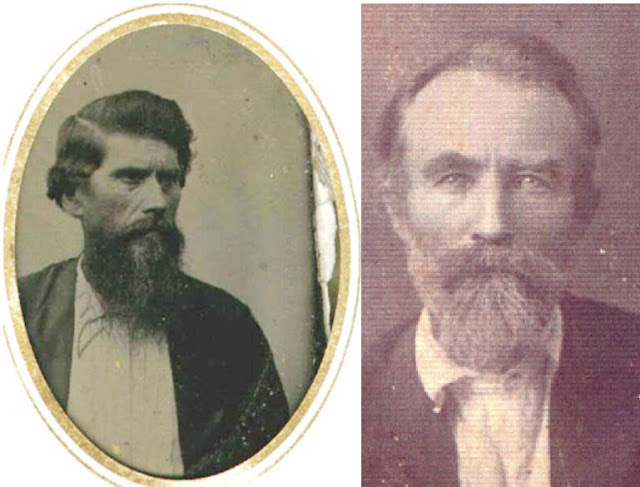 The different profiles of the men pictured in this side by side comparison makes it a little difficult; however, they have the same nose, head shape, and the same large mustache. The distance between his eyes and eyebrows look to be about the same. The hairstyle on the tintype of Howell from the family bible may have been taken in the late 1850s or early 1860s. The hair over his ears and the puffy hair on top date that picture. The photo of the unknown couple probably dates around 1890.

The woman in the photo of the unknown couple looks quite a lot younger than the man. That made me wonder if it was a father - daughter photo instead of a married couple, but this week, I brushed up on my Albritton history.  Howell was fourteen years older than his wife, Laura Irene McDaniels!  And, a Xeroxed copy of a photo of an older Laura (at Ancestry.com) looks as if there might be a match -  a better photo is needed.

While I cannot definitely say that the unknown photo is of Howell and Laura Albritton, research in that direction is certainly warranted. If not Howell, what about other men in that family. My great-grandmother, Harriet, had several brothers.

Family photographs from the collection of Judy McAlister. Used with permission.