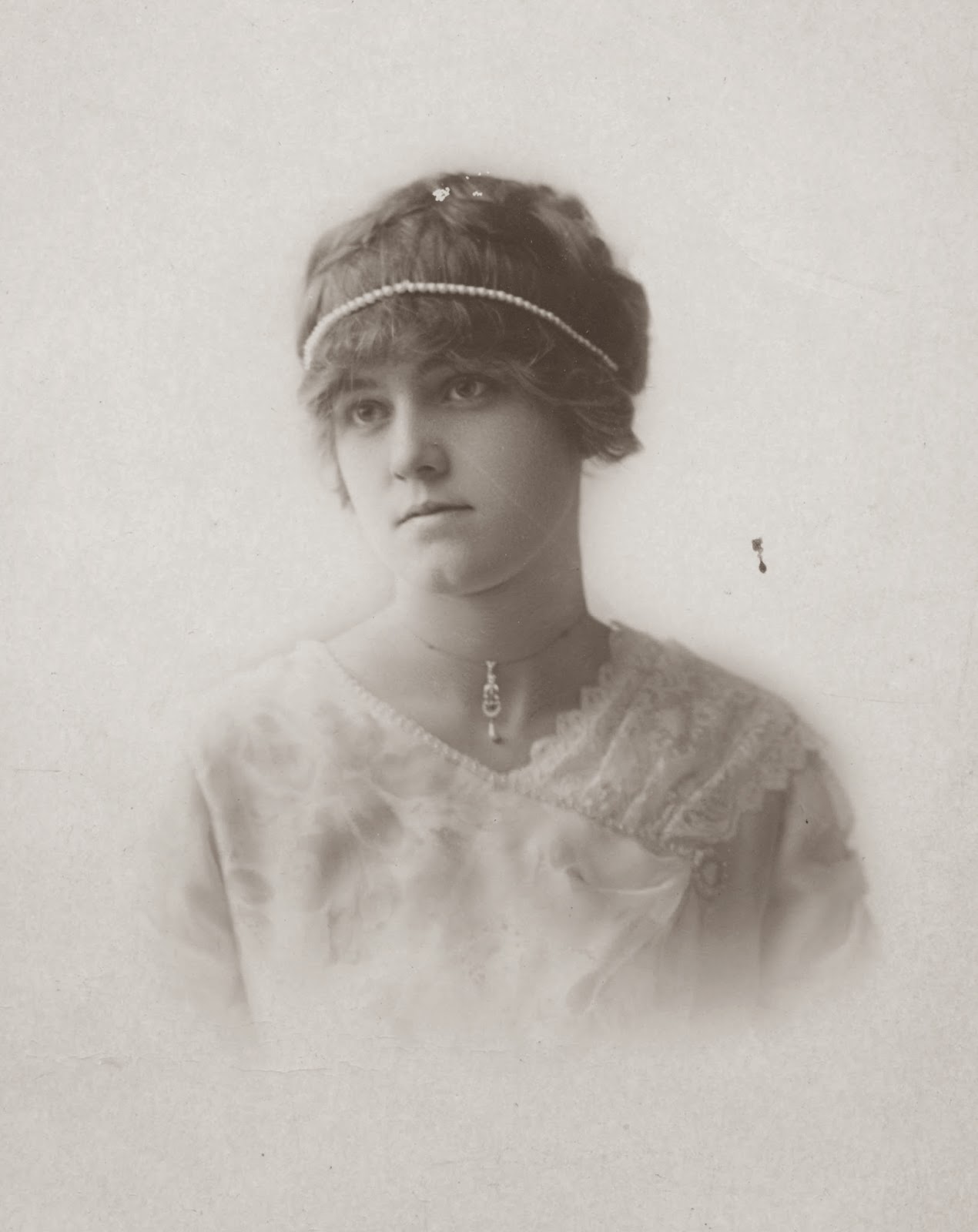 Any little doubts about last Friday's identification of Feather Girl as Laura Isabel Wylie were dispelled when Jane sent me this 1926 photo of Laura.
Thank you, Jane!

Photographs of Laura Isabel Wylie used with permission. From the collection of Jane F. Aebersold.
Posted by Diana at 6:38 AM 0 comments

In 1850, William Hairston, age 4, was listed on the Hinds County, Mississippi U.S. Census with his parents, John L. and Eliza Hairston. He would have been the older brother of my great-grandfather, Phillip A. Hairston, who was born in 1852.

William was not with the family in 1860. Could he have been living with another family or just left off the census? Exhaustive searches of records, online and in print, gave no clues as to what may have happened to William.

William must have died before 1860 was a notation in the margin of a 1992 letter from a Hairston researcher to my cousin, Jackie. A very plausible assumption as about 216 out of every 1000 white children died between the ages of 0 to 5 during that time. That the Hairston family was relatively poor and that Eliza was uneducated probably increased the risk of early death.

I am going to assume that William Hairston died at an early age. However, that won't stop me from checking new online sources, courthouses, and libraries for any information about William. 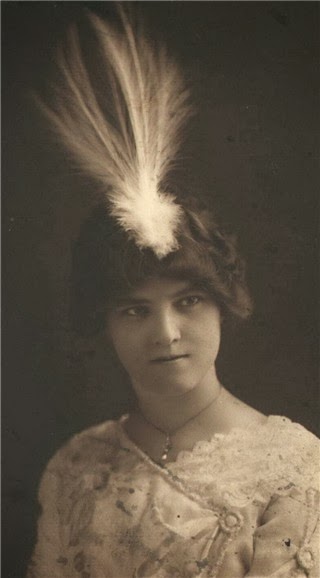 I've have had this picture, affectionately called Feather Girl, for about 15 years. Copies of her picture have been posted on several websites, my blog, and sent to countless Hairston, Criswell, and Bryan relatives with the hope of learning her identity.

Despite being seen by hundreds of people, Feather Girl remained unnamed.

Well, last month, I received a picture from my not so distant cousin, Jane, who asked, This is a pic of Laura Isabel Wylie . . . . . any chance Laura could be your "feather girl?” Possibly, but it was hard to tell. HOWEVER, last week, Jane sent another picture of Laura Isabel Wylie wearing Feather Girl's dress and necklace.

Laura Isabel Wylie was my father's first cousin. She was the daughter of Dorothy Elizabeth Harriett Bryan and Thomas Sumter Wylie.

Laura was born in 1894. If she is a young teen, as the picture suggests, the Feather Girl photo was taken before 1910. 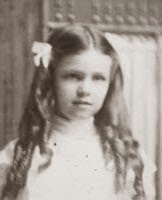 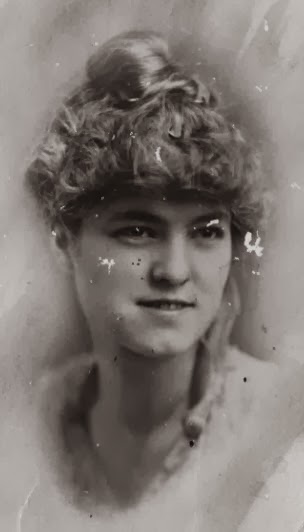 These photos of Laura Isabel Wylie all point to her as my Feather Girl.

Photographs of Laura Isabel Wylie used with permission. From the collection of Jane F. Aebersold.


Phillip A. Hairston, my great-grandfather, was first found as an eight year old child on the 1860 census of Hinds County, Mississippi.  At the end of the Civil War, Phillip and his family moved to Falls County, Texas. It has been said that they stopped in Arkansas prior to coming to Texas.

Phillip Hairston and most other members of the family cannot be found on the 1870 census; however, it was reported that the home of John L. Hairston was consumed by fire on April 2, 1870.


In 1880, Phillip, Lodema, and extended family can be found in Falls County. Family living with or near Phillip included his father, his sisters - Mattie Chisum and Permelia Noah and their families,  a James or Jane Hairston, and Phillip's niece and nephew, John and Adeline Gilbert.

Johnie Myrtlene "Myrtie" Hairston, daughter of Phillip and Lodema, was born on July 9, 1880.

Myrtie Hairston married Redic Eli Bryan on February 7, 1900 at the home of her parents in the Bethel Community.  She and Redic moved to Comanche County where Redic tended a bar belonging to his brother-in-law. Phillip and Lodema remained in their Bethel home and were found living there with Phillip's sister, Sarah Jane Hairston on the 1900 U.S. Census.

On all census records found, P.A., or Phillip, is listed as a farmer. I was told that he raised sheep and sold horses. It has been said that Redic first met Myrtie when he purchased her favorite horse from her father.

On November 11, 1905, it was reported in the Stephenville Tribune that Reddick {Redic} Bryan and P.A. Hairston, who recently disposed of their property in Erath County, are nicely located on a fine piece of property they paid $20 per acre. They bought all the corn on the farm at 25 cents. They have already taken possession of their new homes. The Tribune neglected to say that this fine property was in Baylor County, Texas. 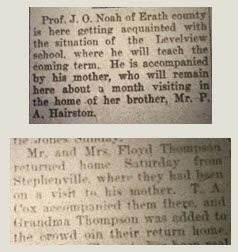 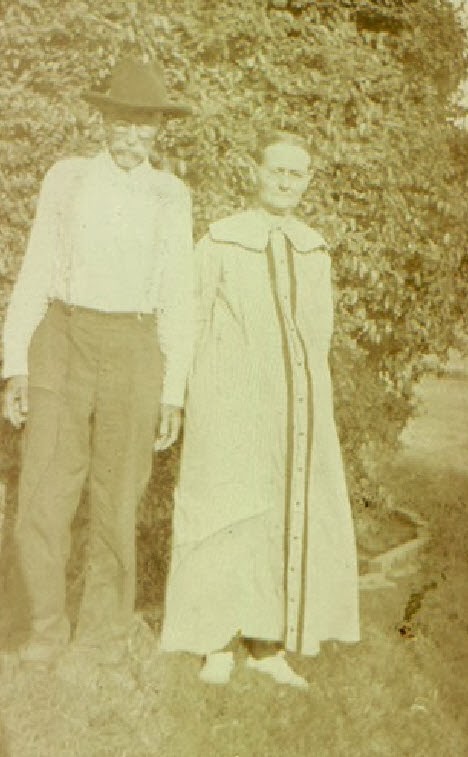 Phillip's sisters, Permelia Noah and Martha "Mattie" Thompson both visited Baylor County in September 1917. I am sure that they knew it would be the last time that they would spend with their brother. Phillip is pictured above with his sister, Permelia.

Up until the age of nine or ten, my mother put all cards that my brother and I received into scrapbooks. We each had our own "cardbook" and when we were sick and confined to bed, Mom let us read our cardbooks. These are a few of the Valentines found in my book.

I have taken Amy Crow's challenge to write about  52 ancestors in 52 weeks. Each of these posts will be about my father's Hairston family. This is week #6 and I have learned new facts about each person while putting together these posts. I love this challenge as not only does this give me an outlet for my research, but helps it me organize as well.

For those of you who saw my earlier post today (I mistakenly clicked on "Publish" when this was far from ready to be posted.), I hope that you find this a big improvement. And if anyone using Blogger knows how to repair that situation, I would be happy to have some instructions.

Hairston Albritton "Buster" Bryan was my father's older brother. Hairston was his mother's maiden name and Albritton was the maiden name of his father's mother. This is Buster's story.

Buster lived in Baylor County for almost all of his childhood. In June of 1907, the Bryan family moved to Big Spring in Howard County, Texas. Redic sold a farm of 140 acres in the Levelview community, known as the Cap Carter Place, to J. C. Arden for $33.00 an acre. Before he left, he also sold farm tools, four mules, two milch cows, hogs, chickens, turkeys, and guineas. It can be assumed that he did not purchase a farm in Big Spring.

By November of 1909, the Bryan family returned to Baylor County and it was reported in the Baylor County Banner that they were looking for a home in Levelview near Buster's grandparents, Phillip and Lodema Criswell Hairston. The home pictured above is the Hairston home in the Levelview community.


Buster sang in the glee club and played football at Seymour High. The 1923 Jackrabbit Class Poem states this about Buster - There are many things about Buster that one might say. One is that he is growing taller every day; On different tasks he never gives in, For he has the determination to win.

Buster's mother passed away in 1927 and his father in 1929. Buster was the administrator of his father's estate. At that time of his father's death, he was living in Wichita Falls, Texas, working at  Kemp-Kort Drug Company. My 2nd cousin once removed, Juanita Thompson Gleghorn, wrote the following about Buster.

In 1929 our youngest sister was burned, and died in three weeks. It was a very sad time for us, so we were renting the farm at that time. Our landlord built a new house on the south side of her place and let us move there, the first new house we ever lived in. Buster would drive out once in a while to get some lye soap to wash his beautiful, black curly hair in. He said it kept the dandruff down.  He was a handsome young man . . . . .   As well as I remember, your grandmother and Redic had passed on. So Buster knew we were in a new house and he and Dad made some kind of trade I guess for Buster brought out some furniture to us, for we didn’t have anything pretty for our new house.

Buster's grave is unmarked. Although both of his parents, grandparents, and baby brothers were said to be buried together, only his mother has a marked grave.


Many facts found in the obituary are incorrect. Buster was born on January 24, 1906 not December 21 - that was his brother's birthday.  Buster graduated from Seymour High school in 1923, not 1924.

Buster did not have a step-daughter, but did have a step-son. His sister, Willie Mae (aka Willa Mae), was married to Jimmy Dudley, not Armstrong.

As stated in the obituary, my father, Whit, was not told about the death right away. It's unknown as to when he learned of his brother's death.

Friday's Photo: Is this a Quinn?

The couple had four daughters

Was this Delia Quinn who remained in Ireland or the daughter of Margaret Mary Quinn? Or, a cousin or family friend? We may never know; however, I have identified many photos by putting them on-line. Someone may have the same photograph. And, their's may have a name on the back.

I don't have as many photographs of Dad's sister, Willa Mae Bryan Dudley, as I did of his other sisters. However, she did seem to make it in the newspaper more often than her other siblings.  Here is her story.

I assume that Willa Mae attended Seymour High School, but according to the class rolls, she did not graduate from that school. Her mother was very ill and died in the spring of 1927, the year that she turned 17. In the fall of 1927, Willa Mae was living in Borger with her sister, DeRay. Could she have gone to school in Borger?


In 1930, Willa Mae was on a train wreck while on the way to visit her brother, Hairston "Buster" Bryan in Wichita Falls. She was 21 years old and still went by the name Willie May. It was written that she was a teacher in Borger; however, I think that at that time she actually worked at a drug store in Borger. To see what Willa Mae said in a brief interview click on the link to my clipping at Newspapers.com.  I clipped the entire page so you will need to enlarge it to read it.