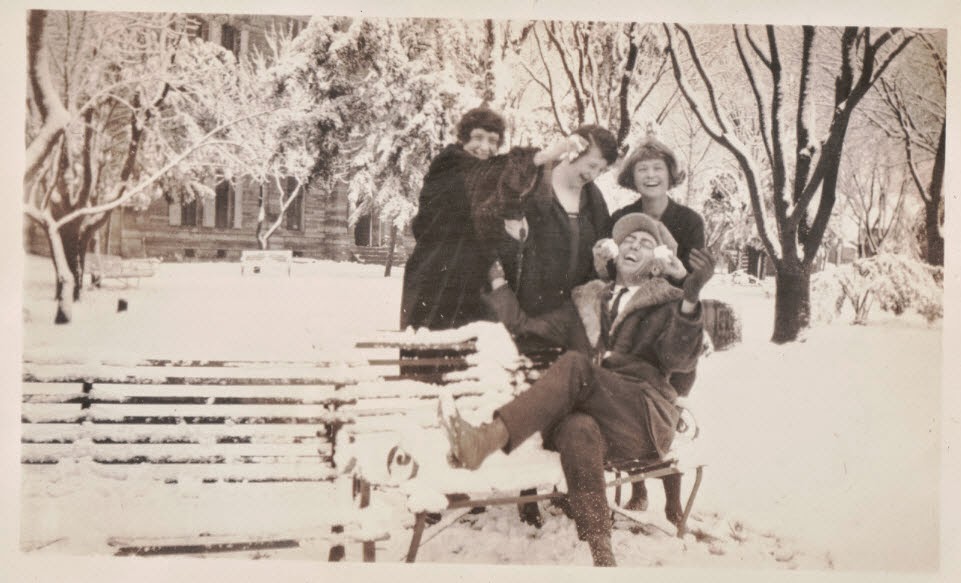 Reports say that we had more than five inches of snow in Virginia Beach yesterday. We usually get snow a few times a year, but not this much. I don't picture snow when I think of the states farther south, but my sister, in Alabama, reported 10 inches on her Facebook page. This photo, probably taken in Texas, shows a heavy snow.

There are no markings on the photo. The building looks stately. Could it be a church or college building? Maybe an elementary school?

The photo belonged to my aunt, DeRay Bryan. She attended schools in Seymour, Texas and Simmons College (now Hardin-Simmons University) in Abilene. In the 1920s she taught grade school Seymour, Amherst, and Borger - all in Texas. DeRay lived in Borger, Texas from 1927 until her death in 1987. I have looked at schools and churches in those areas at that time period, but did not find a match. Family photographs and documents from the collection of Diana Bryan Quinn.
Posted by Diana at 5:00 AM 0 comments

From the Files of Marguerite Cook Clark: John Cooper Manning 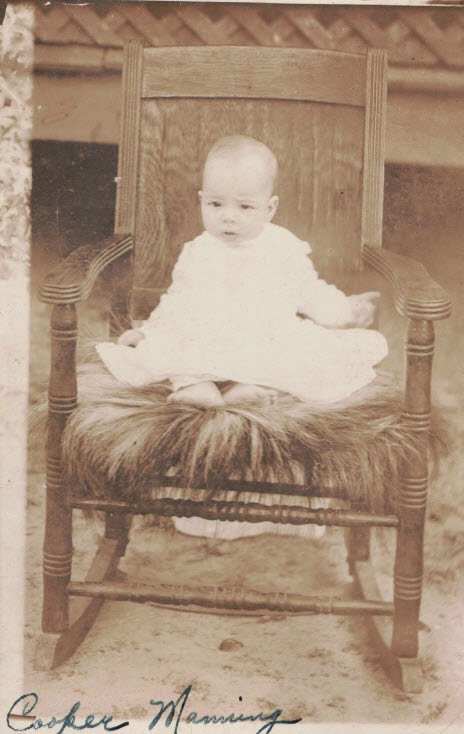 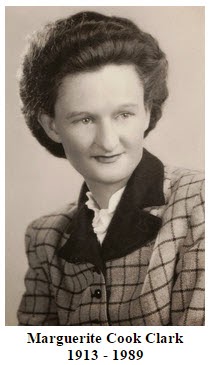 This very cute photo was found in the collection of Marguerite Cook Clark. I looked up Cooper Manning and found several throughout the United States, but decided that this is probably John Cooper Manning who was born in Ringgold. Louisiana in 1916. One or both of Cooper's parents and Marguerite's parents may have been friends or very likely cousins.

Cooper was the son of Simon Leon Manning and Mary Irene Conly. Cooper's father had an older brother, John Cooper Manning, who was born in 1867 and died at age 18 in 1885. It can be presumed that Cooper was named for his father's brother. Cooper's grandfather, Benjamin Manning, was a friend of my great-grandfather, Terrell Bryan.


An article in the Ruston Daily Leader shows that John Cooper Manning graduated from Ruston High School in 1934.  Several articles about him were found in the years 1933 to 1934 and he was always referred to as Cooper.

On February 5, 1960, Cooper's life came to a tragic end. Cooper, Flora, and their young son, Johnnie, died in a plane crash in Bolivia. They were on the way back to their home in Ruston.

Dorothy (Dollie) Emily Regan was the 9th child of John Regan and Martha Davis. She was a granddaughter of Elizabeth Regan Bryan (my great-grandmother).  Dorothy was born on March 4, 1852 and was first found on the 1860 census in Bossier Parrish.

On December 23, 1868, Dorothy married George Pior who died from gunshot wounds in the winter of 1870 in Bienville Parish.  She married David A. Rogers on August 9, 1874 in Bienville Parish and had six children. Annie is their youngest born in 1887.


David died in 1913 and Dorothy died in 1936. They are both buried in the Arcadia Cemetery in Bienville Parish, Louisiana.

Charles A. Giddens (My Great-Grandfather) Graduated from Jonesboro High School in 1888

A random newspaper search for "Giddens" in North Carolina led me to these clippings. You never know what you are going to find in old newspapers.

Jonesboro High School was a Methodist school and operated under the auspices of the Fayetteville District of the North Carolina Methodist Conference in the town of Jonesboro. The school was several hours from Charles Giddens' family home of Sampson County so it must be assumed that he boarded somewhere in town.


Find more about Charles A. Giddens by clicking here.

From the Files of Marguerite Cook Clark: Tulette Bryan Barron 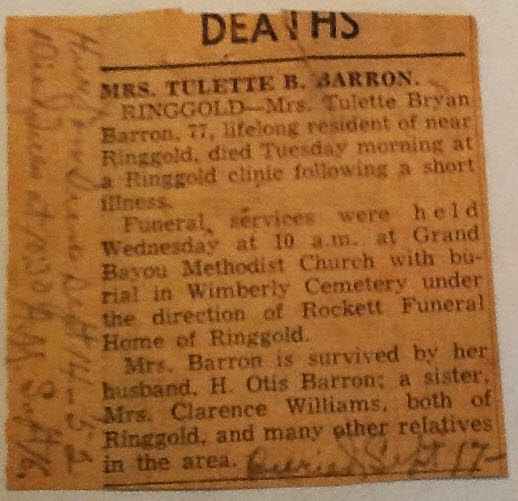 Tulette, a life-long resident of Bienville Parish,  married Horace Otis Barron on August 1, 1918. He was a farmer in the Ringgold area. They had no children.

Tulette died on September 16, 1952. She is buried in the Wimberly Cemetery. 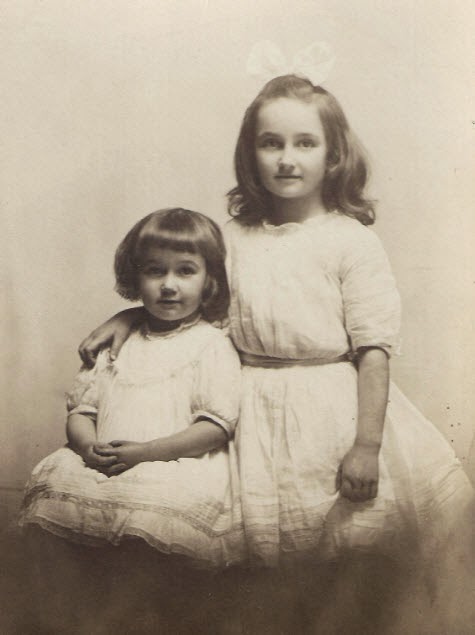 This photo has had me guessing for 15 years. It was one of many unlabeled photos sent to me by my cousin, Jackie.  After looking at children in my Bryan family tree, I narrowed it to my aunts, Marie and DeRay, or their cousins, the daughters of Laura Louise Bryan Keith, Laura Louise and Eddye Katheryn Keith.

The girls really didn't look like other photos of Marie and DeRay and I didn't have known photos of the Keith girls . . . until September. 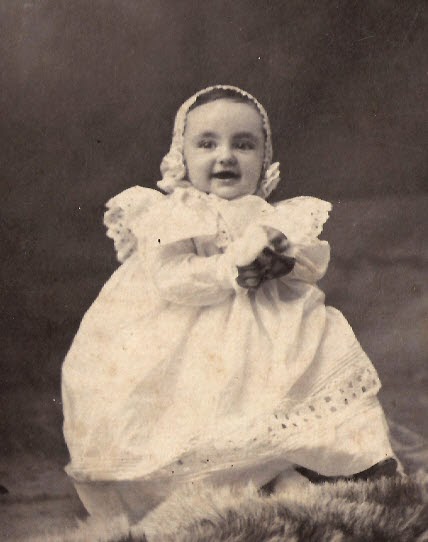 While looking at the files of Marguerite Cook Clark, I found this photo and immediately recognized her as one of the girl's in my photo. On the back is written

Eddye Kathryn was the second of three children born to Laura Louise Bryan and William Harve Keith.  The first daughter, unnamed, was born and died in 1900. She is buried next to her mother in West End Cemetery, Stephenville, Texas.

Kathryn appears to have been born in 1903. Her younger sister, Laura Louise was born in 1905, and their mother, my grandfather's youngest sister, passed away from complications related to typhoid in 1908.

The girls were living with Keith family members in 1910 and 1920. Kathryn married Wayne Merrill Chandler on June 21, 1922 at the Keith home.

The two girls in the photo are most likely Kathryn and Louise Keith. Another photo mystery is solved; however, now I have additional questions.

Kathryn is said to have died in Colorado in 1925 and is buried in West End Cemetery in Stephenville. Her sister, Laura Louise may have lived in Colorado along with Kathryn. Why was Kathryn in Colorado and how did she die?

Carl Forrest Greenway died in 1974, but I feel as if I have been collaborating with him about the Hairston family for the last fifteen years. Some of his letters, found in the Georgia State Archives were sent to me in 1999. On a visit to the New York Public Library in 2000, I copied some of his letters and notes found in four very large binders. That same year, another researcher sent a copy of a letter found in the Bassett Historical Center.

Carl F. Greenway researched the early Hairstons of Virginia and pointed out information in other research that did and did not make sense. He did not have the advantage of the Internet so traveled throughout the south and to Salt Lake City to find family. He often spent time talking to and writing to distant cousins. From those interviews and letters about his mother's Hairston family, I found clues to help me further my research. I know that I need to go back to the NYPL and maybe to the Bassett Historical Center and the Georgia State Archives. At the New York Pubic Library, I only copied what I thought was pertinent. However, I now know so much more about this branch of the Hairston family. Names such as McBurnett, McKain, Stallings, Simonton, White, and McCauley meant nothing to me in 2000. Did I miss something? I need to know.

Carl's letters indicate that he sent research to the North Carolina State Archives. Recently, I found one item in the Family History Library in Salt Lake City. That's two additional places to search. Were there more documents to find? Did he spread his research around according to state and family? Or, did he make copies to send to various repositories? Did those binders at the NYPL contain all of his research?

First, I needed to know a little more about Carl Forrest Greenway. I knew that he was from Texas, the Hairstons were his mother's family, and when he was researching, he lived in New York City. What I thought would be a brief Internet search, took several days of reading and searching. Carl Forrest Greenway was a brilliant, talented, and generous man.

Carl took piano lessons in Hamlin and by age 11, he was found in local newspapers playing the piano at weddings. Throughout his school years, he played at school, church, and civic events. In 1930, his talent was written about in the local newspaper.

In addition to music, he was found to win at least two awards for his saddle horses and awards at school for spelling and writing.

Carl graduated from Hamlin High School and attended Baylor University, Hardin-Simmons, the University of Mexico, and Harvard. Click on the links to to each school to see more.

Before WWII, Carl worked at the Bryant-Link Company where he managed the dry goods department. He continued to be active in church and in, he was elected as the president of the Hamlin Rotary Club.

Flying was another of Carl's interests. In 1941, it was written that he was working on his Federal Flying License.


As a young man Carl traveled to Yosemite and Canada, New York City, Denver and San Francisco. Databases at Ancestry.com show him arriving from both Paris and Rome in the 1950s.

Carl entered the Army Air Corps in 1942 and was accepted in to the officer training program. He left the army in 1946 with a rank of Major.

After completing his graduate degree at Harvard's business school, Carl worked for the investment firm of Spencer Trask & Co. where he eventually served as vice president and director.


Carl Forrest Greenway stated, in a letter to Will Hairston, that he began researching family after attending his nephew's wedding where the bride's questions about family rekindled an earlier interest in his family history. This wedding was July 12, 1962. I have letters written by Carl F. Greenway dating between November 24, 1962 and December 10, 1967.

In a letter dated July 5, 1963, Carl wrote the following about genealogy.

I can understand why one would be a professional genealogist. I think that
it is the most fascinating - if often frustrating - work possible. Sherlock Holmes' labours often pale in comparison, no? Doing with it and still carrying on a regular job does present a problem - my social life has completely gone to pot, as has my terrace, but I have been concentrating rather heavily while older generations were available to some extent.

Carl Forrest Greenway passed away on September 13, 1974 in California. His very informative obituary can be found along with 30+ other clippings about him by clicking here.

Dad's garage was probably one of the busiest places in the house. The washer and dryer were housed in the garage, it was the home of Dad's tools, and it was the family entry and exit point. On rainy days, we played in the garage. Mom's childhood chalkboard was on the wall and a hopscotch was painted on the floor.


It was Dad's man-cave. He read the paper and did his crossword puzzles in the garage. A phone, a refrigerator, and even a small television were kept in his garage.

When grandchildren came along, their growth was measured on one wall. Dad passed away in 2001. Mom sold the house in 2008. Before she moved,  I took photos of the marks on the wall.

Paul, Jason, Emily, and Will - these are for you. 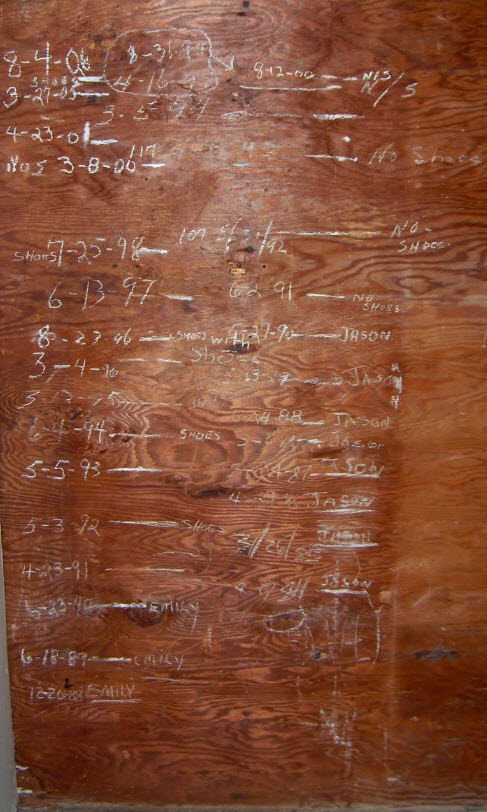 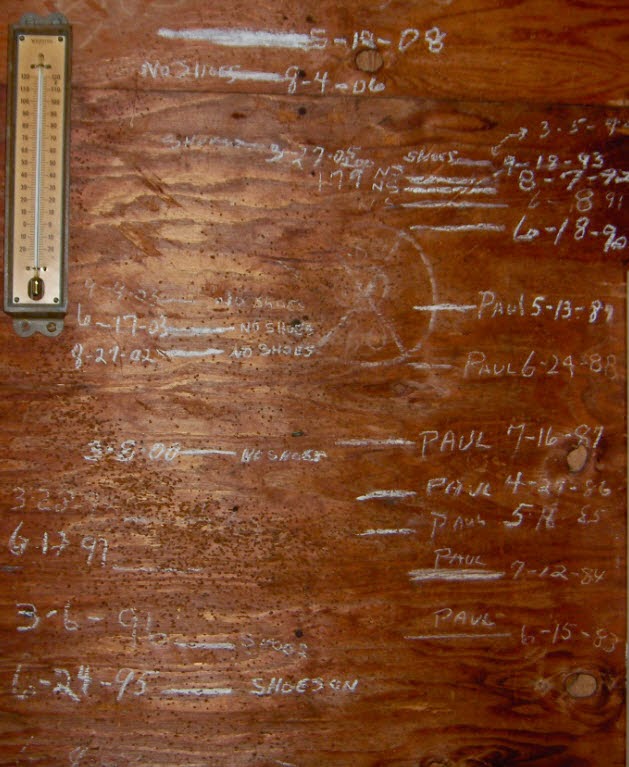 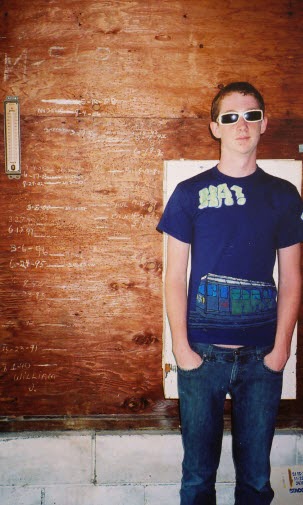 The first photo shows growth marks and dates for Emily and Jason.

Just above are marks and dates for William and Paul. William was the last one measured on May 12, 2008.