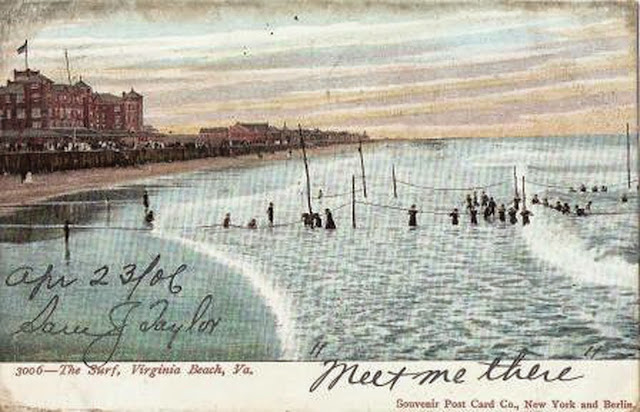 The writing prompt this week for #52ancestors is travel. I thought I would share a postcard from my hometown, Virginia Beach, VA, where tourists travel each summer to spend time at the beach.

This postcard depicts The Surf, Virginia Beach, Va. and was published by the Souvenir Post Card, Co. This company published postcards from 1905 to 1914. I love seeing the ropes in the water. We no longer see that in Virginia Beach.

The hotel pictured is the Princess Anne Hotel. It opened in 1890 near the community of Seatack, not far from where I currently work. In 1907, the hotel was destroyed by fire.

The postcard was sent on April 23, 1906, to Miss Bessie Allison of 2004 West Cary Street, Richmond, Virginia. It appears to have been sent by Dave J. Taylor. The only message, "Meet me there," is on the front of the card.

A search for Bessie Allison indicated that her full name was Elizabeth Price Allison.  She was born in 1880 in Kentucky and was working as a clerk at an insurance firm, in Richmond, Virginia, by 1904. She can be found in census records from 1880 to 1940. In 1940, she was unmarried, lived on West Grace Street in Richmond with her sister, and continued to work as a clerk at a life insurance company. 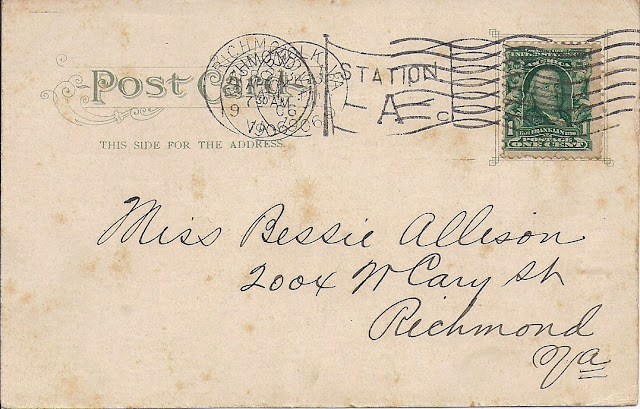 
Known as the Fourth of July or Independence Day, this day has been celebrated as the birth of American independence since 1776 when, during the American Revolution, the delegates of the Continental Congress adopted the Declaration of Independence.

I now know of three of my ancestors who served as patriots in the American Revolution.

Moss, B. G. (1992). Roster of the Patriots in the battle of Moores Creek Bridge. Blacksburg, S.C.: Scotia-Hibernia Press. 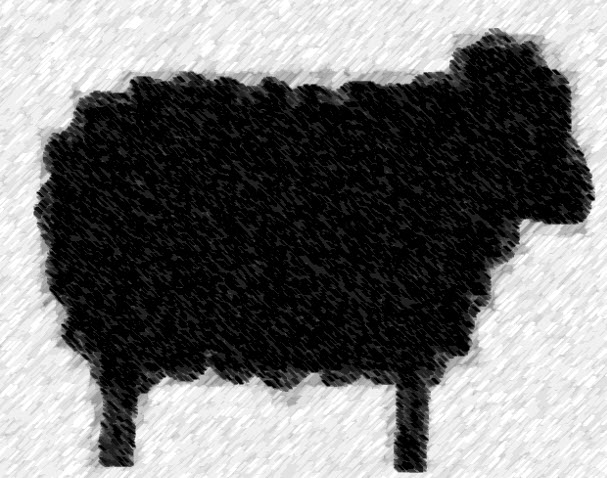 The writing prompt for post twenty-six of #52ancestors is Black Sheep. I struggled with this one. What makes an ancestor a black sheep? Is it something they did? Or, did they just march to a different drummer?

Many of our ancestors did things they later regretted.  Those deeds are not always things they would want to be disclosed. Secrets are found in many families. Are we obligated to reveal all of those secrets?

I will not label an ancestor a black sheep so I am going to pass on this post and respect what may have been my ancestors' wishes.

Family photographs and documents from the collection of Diana Bryan Quinn.
Posted by Diana at 11:28 PM 0 comments

I have much family history to share regarding the Quinn family.  My family history webpages have been on Rootsweb Freepages since at least 2001 and the Quinn pages had several thousand views - more than any of my other families.

Unfortunately, my web pages along with all other Rootsweb pages have been removed due to security problems. It is unknown if or when the pages will be restored. As I have time, I will add the family history pages, along with much-needed updates, to this blog.

Today, I have added information about the family of William Quinn (#1) and Bridget Brannelly. You can see this as a tab above or by clicking here.

Family photographs and documents from the collection of Diana Bryan Quinn.
Posted by Diana at 8:07 PM 0 comments