When I saw the writing prompt, bearded, for week forty-five of #52ancestors, I immediately thought of these photos from the collection of Marguerite Cook Clark. I actually think these are photos of the same man.

The first photo is clearly labeled Uncle Frank Thomas and was taken by a studio found in New Orleans. Knowing the photos were passed down from Sarah Wimberly Bryan, I checked the Wimberly Family History and found Benjamin Franklin Thomas. In the book, he was once referred to as Frank. Could this be B. F. Thomas? 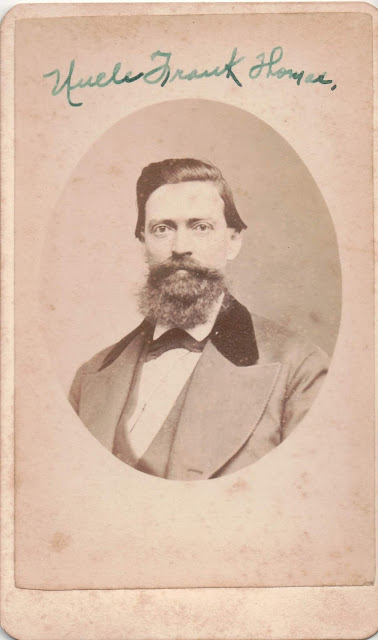 Sarah Franke married Rueben S. Collier in 1879. Sarah died in 1881 and her sister, Elizabeth, married Ruben in 1882. Rueben was a Methodist minister in Louisiana and in 1899, transferred to the Texas conference where he was assigned to churches in Milam County. 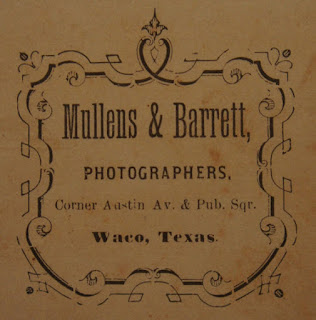 This second photo was taken by a studio found in Waco, Texas. On the back is written For Cousins Alice and Sarah Bryan. Sarah and Alice were Wimberly sisters who married Bryan brothers. They were two of  Frank's wife's older sisters actually making them Frank's sisters-in-law, not cousins.

I did find a Frank Garrett Thomas, a distant cousin who lived in Georgia. If not B. F. Thomas, could this be Frank G. Thomas?

Someone attempted to label his photo as ______ Hunter on the back. I was not able to find substantial information about any Hunters connected to the Bienville Parish Wimberlys.

B. F. Thomas' only daughter lived in Texas, I could easily see him visiting his daughter - especially if there was a grandchild. Waco is in the vicinity some of Ruben Collier's churches.  However, at the time his daughter was in Texas (about 1899), he would have been about 67 years old. He doesn't look that old in this photo. 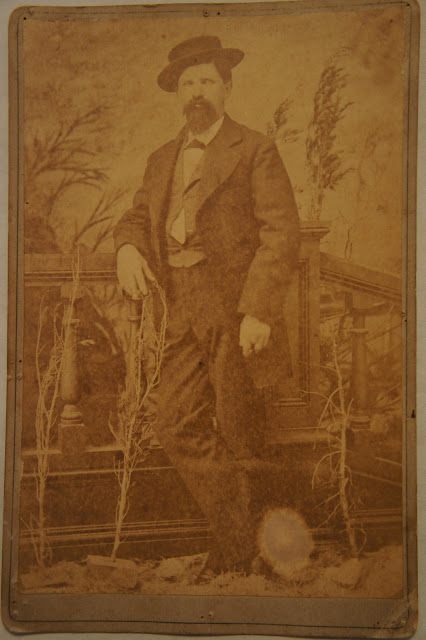 Is Benjamin Franklin Thomas your ancestor? If so, do you have photos? Are you a Wimberly? Are you able to help with any information leading to the idenification of this photo? 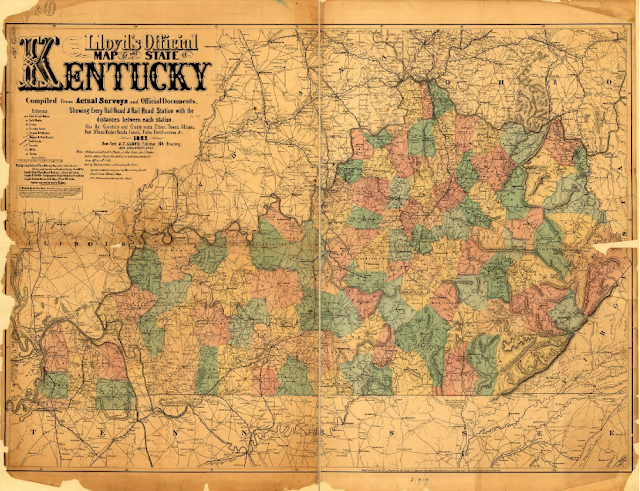 The writing prompt for post Forty-Four of #52ancestors was Frightening.

I spent time looking at Edmonson County, Kentucky Order Books to find information about my 4th great-grandparents. I found very little about them but found many decisions regarding children from poor families.

These decisions usually involved placing children in homes to learn a trade and may have been necessary.  In the early 1800s, there was no welfare, social services, foster care, or juvenile court system. Counties had to take care of their own. However, I felt especially sad for the very young and thought about how frightening this would be for both the parent and child.

A few of the many children found in the Order Books are listed below.

Polina McCombs, age 4, bound to John Chandler, until she turns 18, to learn the business of Housewifing.

James and Margaret Blair were summoned to court, 1842, to show why their ten-year-old son, James, should not be bound out to learn a trade.

In 1847, seven-year-old James Atkins was bound to Joshua Dunn to learn the business of farming.

In 1839, Mahala Houchin was required to appear in court to show cause, if any, why her 3 younger children should not be taken from her and bound out to learn some useful trade or occupation.

William Jasper Decker, a poor boy the age of three years, was bound to John Harrison to learn the business and trade of a farmer.

In Spring of 2016, I visited Ireland. One of my quests was to locate death records of my husband's Irish family. They were easily obtained at the General Register Office (GRO) in Dublin. Now, these records can be found online (free) at the Irish Government website www.irishgenealogy.ie.

For #52ancestors post forty-three, the writing prompt was cause of death and I know some of my husband's family would like to see these death records obtained in Dublin.

The following death records are those of known Quinn and Murray family.


The following are Quinn death records of individuals who may be related to my husband's Quinn family. Some descendants of Quinns living in Labane were identified in a photo as cousins; however, we don't know how this line of Quinns is related.

Family photographs and documents from the collection of Diana Bryan Quinn.
Posted by Diana at 7:33 AM 0 comments

This week's writing prompt for #52ancestors is Thankful.

I am thankful for my family who listens to my endless stories and answers my questions.

I am thankful for my family of readers, many of whom are distant cousins I've never met. Some of you read my posts when even when it's not your family.

I am thankful for those who have shared family information, photos, and so much more.

I am thankful to those who came before me. Through my research, I have come to know many of my ancestors and their struggles and successes. Without each one of my them, I would not be here today.

Family photographs and documents from the collection of Diana Bryan Quinn
Posted by Diana at 8:11 AM 0 comments

The writing prompt for week 42 of #52ancestors was conflict. I chose to write about Edward Davis, one of my 4th great-grandfathers, as there is very little found about him and information found on Ancestry Public Member Trees conflict.

Edward's wife was Nancy. She is said to be Nancy Holland, I would like to find some definite documentation. A Nancy Holland married an Edward Davis on March 19, 1807, in Garrard County, Kentucky. If this Edward and Nancy are my 4th great-grandparents, the record below indicates that Robert Davis might be my 5th great-grandfather.

On the 1820 United States census, 41 men named Edward Davis were heads of households; three in Kentucky with one each in Madison, Garrard, and Union. I don't know enough about Edward to assume that any of these Kentucky men would be my 4th great-grandfather.

In 1830, there were 73 heads of households named Edward Davis; five were in Kentucky with one each in Trigg, Pike, Edmonson, Madison, and Garrard Counties. I am assuming the Edward Davis in Edmonson is my 4th great-grandfather as there are records showing his family in Edmonson County.


Some researchers, with my 4th great-grandfather in their tree at Ancestry.com, have added John D. Davis and Sarah Litsey as my Edward Davis' parents. I seriously doubt this is true. Edward L. Davis, the son of John and Sarah, did not marry, lived in Harrison County, Indiana and ran a store in nearby Leavenworth, Indiana. Edward L. Davis died in 1834.

As Edward Davis is found in early Edmonson County records, a search of the Warren, Hart, and Grayson county records is warranted.

My 4th great-grandfather can't be found in Edmonson County after 1830. Did he die or did he leave the family? Between 1837 and 1840, four sons of Nancy Davis, all of Edmonson County, were apprenticed to others to learn a trade.