From the Files of Marguerite Cook Clark: Edward Belle Gillon.

Last week, I posted obituaries and a photo of Lucy Octavia Wimberly Gillon. Today, I have some obituaries for her husband, E. B. Gillon. These obituaries were found in the collection held by the family of Marguerite Cook Clark.

There was no date on either obituary so I checked Newspaper.com and found obituaries in The Shreveport Times dated January 8th and 9th, 1968. The obituaries state he died on a Sunday making his date of death January 7, 1968.

All of the obituaries except one, name him as E. B. Gillon. One gives his name as Edmond V. Gillon.  Some checking reveals that his name is actually Edward Belle Gillon. He was born on March 5, 1892, in Red River Parish to James Gillon and Fannie DeMoss.

Edward married Lucy Octavia "Tavia" Wimberly around 1915. In 1920, Tavia and Edward were living in Ringgold with Edward's mother Fannie. Edward was a salesman at a general store.

Edward owned his home and his own store by 1930. Fannie Gillon lived with Edward and Octavia along with a cook, Mirah Williams.

In 1940, Edward and Tavia owned a home on Mill Street. Edward was a manager and Tavia was an assistant manager at a retail store. Tavia's nephew Rush Alums, his wife and son, and three boarders also lived in the home.

Edward and his wife owned The Economy Store in Ringgold. Edward was a former mayor and served on the town council in Ringgold. He was a very active member of Ringgold Methodist Church.

Edward and Tavia are buried in the Wimberly Cemetery in Bienville Parish, Louisiana.

From the Files of Marguerite Cook Clark: Lucy Octavia Wimberly Gillon of Ringgold in Bienville Parish

She married Edward Belle Gillon about 1915. They owned a store in Ringgold and were members of the Bienville Welfare Bureau.

Tavia died in 1962 and Edward in 1968. They are buried in the Wimberly Cemetery. 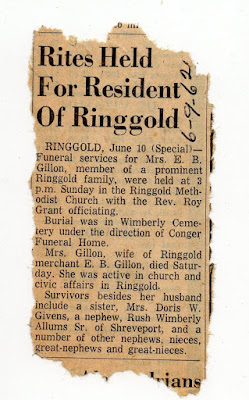 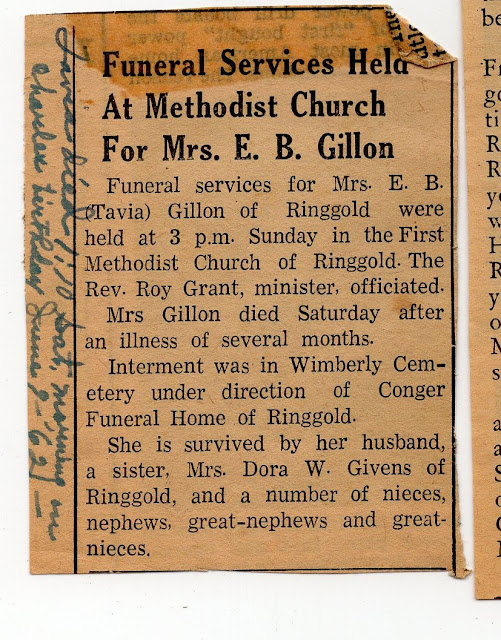 Friday's Photo: Raymond Taylor - Did he go to Borger High School in 1930?

This photo is one of many that belonged to my father's sisters. Dad and his siblings were Texans. Dad was born in Baylor County, Texas along with four siblings. His two oldest sisters were born in Erath County.

Dad (Whit Criswell Bryan) and his sisters - DeRay, Marie, and Willa Mae moved to Borger, Texas after the death of their father in 1929.

I found an 18-year-old Raymond Taylor on the 1930 census of Borger as well as in the Borger High School 1930 yearbook.

He was a senior in 1930, was the class treasurer, played football, and was the business manager of the yearbook. Could this be the same Raymond Taylor? He was close in age to Dad's sister, Willa Mae. Were they friends? Do you see a resemblance?

Family photographs and documents from the collection of Diana Bryan Quinn.
Posted by Diana at 10:17 PM 0 comments

The Family of William Quinn and Bridget Brannelly

William Quinn, the son of James Quinn and Catherine Fahy was born December 07, 1851 in Parish of Kinvara, Townland of Caheravoneen,  Co. Galway,  Ireland.  A farmer, he lived in Caheravoneen until his death on July 29, 1903.

Bridget Brannelly's death record indicates she was 74 years old. This would make her year of birth approximately 1855. Bridget died on September 19, 1929 in Caheravoneen. Her parents are unknown.

Click here to read a little more about Bridget Brannelly.


John Quinn was born on March 03, 1887 in the Parish of Kinvara, Townland of Caheravoneen,  County Galway. Nothing is known about this John Quinn.  It is assumed that he died young as another child was named John in 1890. 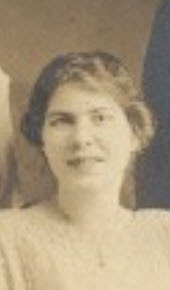 Mary Anne Quinn was born on August 15, 1888 in the Parish of Kinvara, Townland of Caheravoneen,  County Galway. At age 16, she departed from Queenstown in County Clare on the S.S. Campania and arrived at Ellis Island on June 24, 1905.  Her destination was to Jeffersonville, Indiana where she would be staying with her Aunt, Mrs. Dwyer. Mrs. Dwyer paid her passage and Mary Anne had $10 and a ticket to her final destination. This was her first trip to the United States and her last place of residence was Kinvara.  According to Mary Margaret Weber, daughter of Mary Anne Quinn, she arrived in the United States believing that she would be attending school but ended up working as a servant. In 1910, Mary Anne Quinn can be found working as a cook for in Louisville, Kentucky. She
married Lawrence Dominic Meaney, the son of James Meany and Mary J. Hogan, on April 30, 1919 in Louisville.  Mary Anne and Lawrence had three children;  William Murray, Lawrence Dominic, and Mary Margaret.

Click here to read more about the marriage of Mary Anne Quinn and Lawrence Meaney. 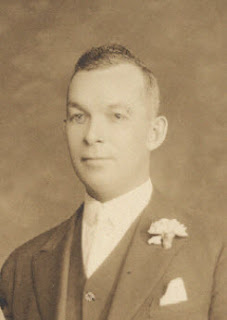 According to John's passport application in 1924, he came to the United States on October 28, 1914 and was naturalized as a citizen on June 8, 1918 in Spartanburg, South Carolina while serving in the United States Army.

The 1930 census shows John married to his wife, Ellen, and working as a taxi cab driver in New York City.  Social Security records indicate that John Quinn died in August of 1965.

Records from the West Galway History Center, indicate John married Delia Gillane on  May 02, 1933 at St. Joseph's Church, Galway; however, this is unlikely as John and his wife, Ellen, had daughters, Mary and Helen in the 1930s. There were a few other John Quinns living in and around Kinvara who may have married Della Gillane.

Click here to see photos of John and his family.

Margaret Mary Quinn was born on May 28, 1892 in the  Parish of Kinvara, Townland of Caheravoneen,  Co. Galway.  Family friend,  Michael Fahy, referred to her as "Maggie."  She left Queenstown aboard the S. S. Carmania on June 15, 1910 and arrived at Ellis Island on June 22, 1910. Her sister had paid for her fare and she listed her mother, Mrs. Quinn of Caheravoneen, Kinvara as her closest relative in Ireland. Her final destination was Jeffersonville, Indiana where she would stay with an Aunt, Mrs. Dwyer. Margaret did not remain in Indiana.  She married Harold E. Dawson on June 13, 1917 and was living in NYC by 1920. Margaret and Harold Edward Dawson had two children; Margaret Mary "Peggy" Dawson and Edward Quinn Dawson. Margaret Mary died in 1984. Her husband died in 1972. Their burial place is unknown. 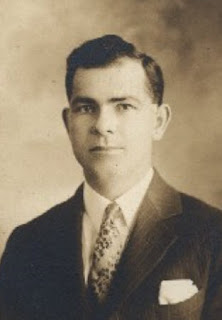 William Quinn, my husband's grandfather, was born on May 30, 1894 in the townland of Caheravoneen, Parish of Kinvara, County Galway, Ireland.

It has been said that William Quinn came to the United States under an assumed name. Under the circumstances of 1921, it would have been a wise decision. William Quinn departed on the ship, the S. S. Celtic, from Liverpool, England using his own name.  It is not known how he arrived in Liverpool and may have used another name to leave Ireland. He arrived at Ellis Island on April 25, 1921.  William paid for his own passage and had $25 in his possession.  He was going to join his brother John Quinn at 58 West 106th Street in NYC.  He was uncertain of how long that he would stay and was in good health.  He was described as 5 feet 10 inches tall, with a dark complexion, black hair and brown eyes. He was 25 years old, listed his occupation as laborer, and could read and write.  He last residence was Ballinsaloe. He named his mother Mrs. B. Quinn of Caheravoneen as his nearest relative in Ireland.

On February 14, 1926, William Joseph Quinn and Susan Murray were married at Church of St. Ignatius Loyola, Park Ave. and 84th Street in New York City. Friends who witnessed the wedding were were Patrick Gahan and Mary Tammon.

In 1930 the Quinn family, William, Susan, and two daughters were living on West 174th Street along with a boarder, Jack Saunders.  William was a chauffeur for an auto company.  William and Susan had three more children. In the 1940s and until his death, William drove a bus in New York City.  William Joseph Quinn died on February 21, 1959 in New Jersey.  Susan Murray Quinn died on November 14, 1994 in Newport News, Virginia.  They are buried in Mount Carmel Catholic Cemetery, Tenafly, New Jersey.

Click on the links below to read William Quinn's pension record from the old IRA.


The Irish Uprising: Obtaining the Records


The Irish Uprising: The Quinn Home

Friday's Photo: In Remembrance of the Kinvara Company Irish Volunteers 1916 - 2016


Peter Quinn was born on June 26, 1896 in the Parish of Kinvara, Townland of Caheravoneen,  Co. Galway. In 1921, Peter was one of several young men who were beaten by the Black and Tan said to be looking for Peter's brother, William  He was also dragged from the back of a wagon from Caherawoneen to Kinvara. Peter suffered head injuries and spent much time as an inmate in a hospital for patients suffering mental illness.  He died in a hospital in Ballinsaloe on December 11, 1945. It was said Peter was buried in a tomb in Ardrahan along with other Quinns; Mick and James.

Celia Quinn was born on April 13, 1898 in the Parish of Kinvara, Townland of Caheravoneen,  Co. Galway. According to Ellis Island records, Celia left Liverpool, England on the Carmania and arrived in the United States on October 17, 1920.  As written on the ship's manifest, her complexion was listed as fair, hair was dark and eyes were gray.  She only planned to stay one year and was going to visit her sister Mrs. Dawson at 25 W. 26th Street, NY.  She was 20 years old and listed her mother, Mrs. Quinn, living at Caheravoneen in Kinvara, Ireland as her closest relative in Ireland. On September 3, 1927, Celia Agnes Quinn married Richard J. Houlihan. Celia was a ticket seller for the railroad. Richard served in the US Military during WWI. Richard also served in the Air Force from 1953 to 1955. Richard J. Houlihan died on October 9, 1962 in New York. Celia Agnes Quinn Houlihan died on February 7, 1984 in Howard County, Indiana. Both Richard and Celia are buried in the Long Island National Cemetery.

Bridget Quinn, known as Delia, was the youngest child of William Quinn and Bridget Brannelly. She was born about 1901.

It is not recorded, but it is assumed that she was also born in Caheravoneen.  Delia, the youngest, remained in Ireland and farmed the Quinn family land with her husband, Joe Stanton, until the 1940's.  Delia had two children, Teresa and Billy. She died when they were very young. Her death date and place of burial are not known.

Family photographs from the collection of Mary Meaney Weber. Used with permission.