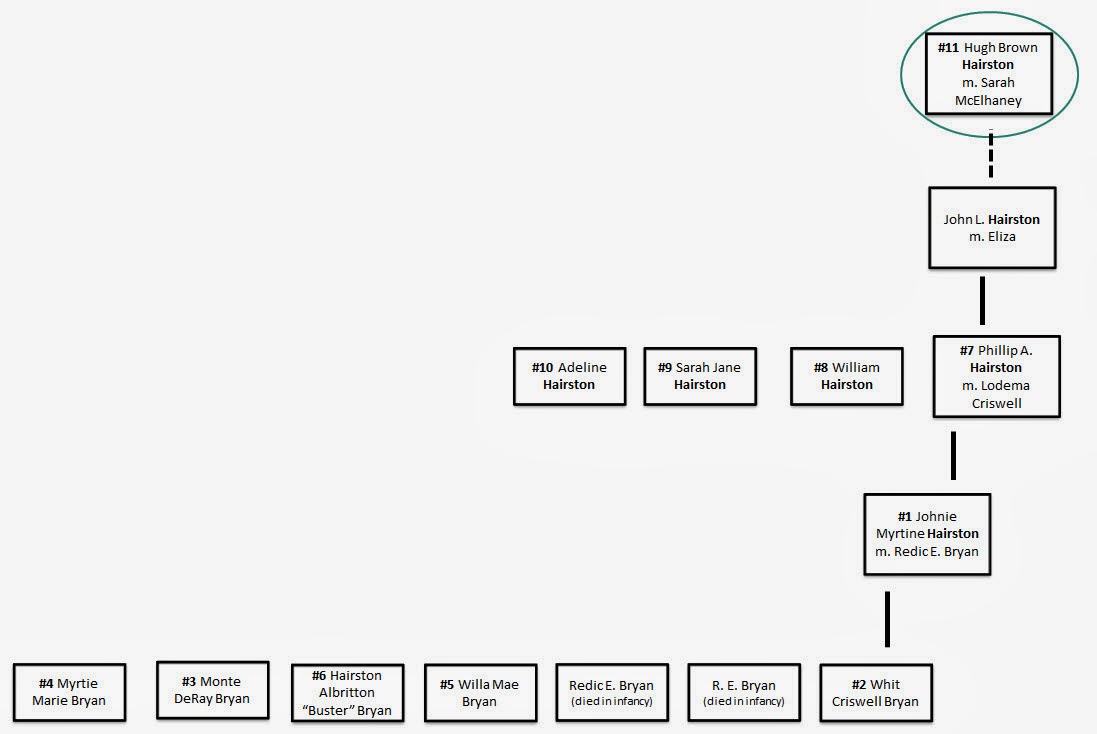 According to the Hairston Family History, Hugh Brown Hairston was the son of John Hairston and Ann Mary Robertson. He was born in South Carolina and authors, Ed Bregenzer and Victor Hairston, suggested that he was my great-great-great-grandfather. The more that I find, the more that I believe that Ed and Vic may have been correct. As much as I want to, I cannot definitely say that Hugh Brown Hairston is the father of my great-great-grandfather, John Lewis Hairston. So, on my tree above, note the dotted line from Hugh to John.

Mary Lee Anderson wrote in her manuscript, TheWHITAKERS and Related Families, that Hugh Brown Hairston married Sarah McElhaney (sometimes seen as McElhenny) and had children, James McElhaney, John Lewis, Robert, Vinson (also seen as Vincent), Sam (also seen as Samuel), Rebecca, Jane, and Mary. I would love to have her source - maybe a family bible with answers to many of my questions.

The first record that I have for Hugh Brown Hairston is his purchase of a "Logg chain" at the estate of William Hairston Sr. on May 4, 1808 in South Carolina. Other Hairston purchasers were Peter, James, Robert, Ann, William, and John.

In 1820 a H. B. Hearston lived in Elbert County, GA. This may or may not be Hugh B.  Hairston as the supposed children do not quite match; however, I cannot find another Hairston who might be this H. B. Hearston.

Hugh B. Hairston, of Jasper County in Georgia, and John Hairston were named as defendants in an action of debt. Hugh was served a summons on March 27, 1828, but John was not found in Jasper County. This John was too old to be his son. Was this Hugh's father, his brother, or a cousin?

Throughout the 1830s, several documents show that Hugh Brown Hairston had moved from Jasper County to neighboring Butts County, Georgia.

The 1830 census for Butts County, Georgia revealed that Hugh B. Hirston was living with eight other persons. He and one female were between the ages of 40 and 49 while the other seven were all "Free White Persons" under the age of 20.

In 1834 H.B. Hairston leased 18 acres of land in Butts County from the estate of George Blessit and the 1835 estate record of Sterling Camp indicated that H. B. Hurston and L. L. Hurston {probably J. L.} had notes due to the estate on December 25, 1836. And, land owned by Hugh B. Hairston was sold in May of 1839 to satisfy a debt to John Hall.

In the Hairston Family History, it states that Hugh Brown Hairston can be found in Henry County on the 1840 census.  I did not find him in Henry County. However, I wonder if the Hugh and his wife Sarah could be the 50 to 59 year old members living with Vincient Herston in Meriwether County in 1840. Also found in Meriwether County were James M. Herston (son of Hugh B.) and a John Haistin with five children living in his household.

My reason for this challenge, 52 Ancesters in 52 weeks, is to organize and share my Hairston research as well as to look for connections between the Hugh Brown Hairston family and my great-great-grandfather, John L. Hairston. So, stay tuned for more Hairston family posts. I would love to hear from other Hairston descendants!