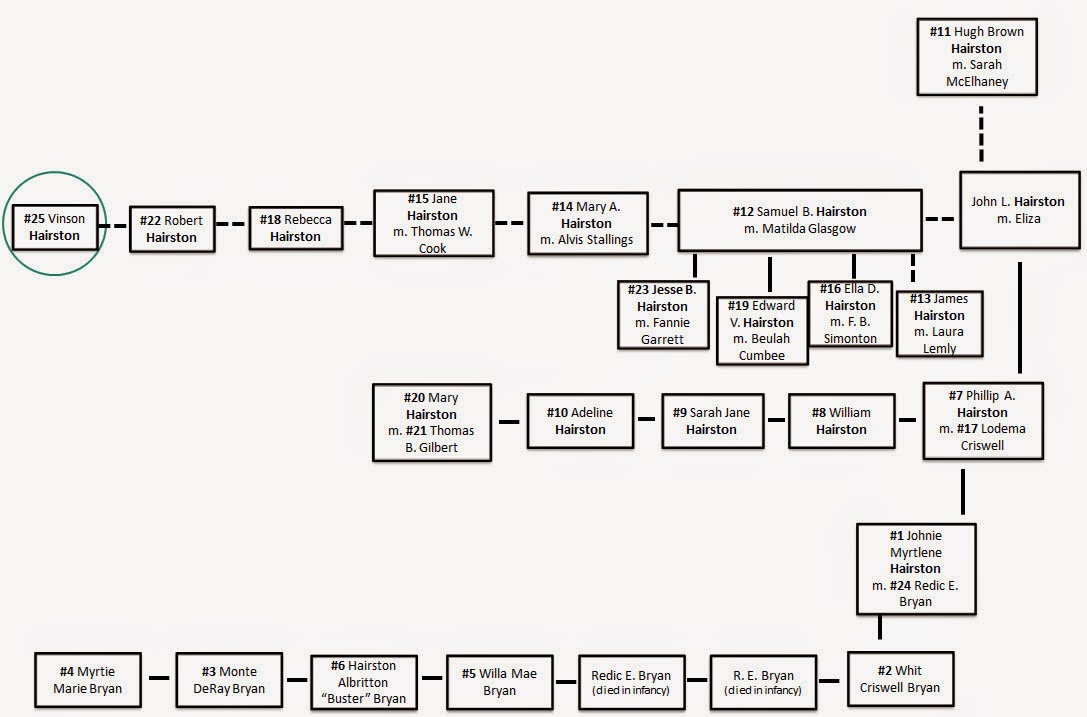 My current theory is that the Hugh Brown Hairston family moved from Butts County, Georgia to Meriwether County, Georgia by 1840. Hugh Brown Hairston might have died in the 1840s and his wife and children may have moved to Hinds County, Mississippi where possible older son, John L. Hairston was living. Or maybe Hugh Brown died in Hinds County. By 1850 some of the family moved back to Alabama and mother, Sarah McElhaney Hairston, remained there until her death between 1870 and 1880.

Vinson Hairston has been found as Vince, Vincent, Vinceton, and V. This less than common Hairston family name has been extremely helpful in the sea of John, Robert, and Mary Hairstons.

John L. Hairston lived in Hinds County with his wife and children in 1850 while Robert, Vinson, Sarah (their mother), and sister Mary's family lived in Macon, Alabama. A Vince Hairston, along with a Robert Hairston, were farmers, living together in Macon County in 1860.

In 1870, a V. Hairston was living with three Stallings children (probably the children of sister Mary) and his mother, Sarah, in Lee County, Alabama.

A 60 year old Vince Hurston was living with Tim and Amy Roberts and daughter, Amanda on the 1880 census of  Tallapoosa, Alabama. Also in that household were Jane Cook (sister to Vinson) and Henry Stallings (his nephew).

That 1880 census is the last mention that I find of Vinson Hairston. However, according to census records, he and/or other family members owned land. I will be researching the land records in July so I am sure that this is not the last that you will see of Vinson Hairston.