In late November 1941, the Pearl Harbor Naval Hospital was over capacity and a mobile hospital was being constructed with prefabricated building segments.

My father, Whit Criswell Bryan, was transferred from the U.S. Naval Hospital in Pearl Harbor to the Naval Mobile Hospital #2 on December 1. However, he had been working at the site of the hospital since at least mid November of 1941. He, along with other enlisted personal, and officers (including doctors), was assigned to quickly complete the hospital. Pearl Harbor was bombed before the hospital was completed.

According to Bob Brunner, a fellow pharmacist mate, the location of the hospital allowed a view of the bombing. Dad told me that the beds in the hospital were given to the patients while the Navy personal slept in trenches.

The following commendation was found in his military record.

January 9, 1942
Commended for zeal and initiative displayed during long and arduous hours working continuously without liberty from 19 November 1941 to 6 December 1941 in order to establish this hospital and for diligently assisting in completing preparations for the care of 110 casualties following an enemy air attack on Pearl Harbor, T.H. on 7 December 1941.

Dad saved this wonderful article about the Naval Mobile Hospital #2. The date of the article is unknown, but from ads on the back, I know that it is a newspaper published in Hawaii. Author, Bob Trumbull, worked at the Honolulu Advertiser. 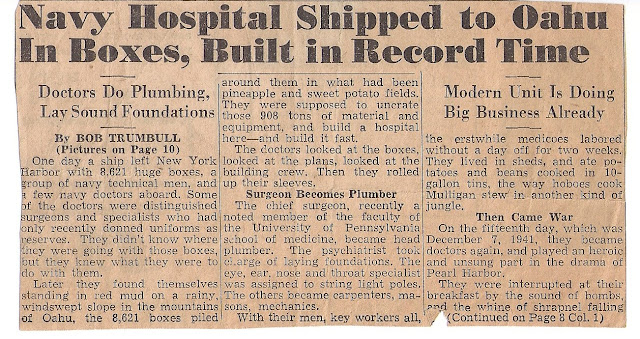 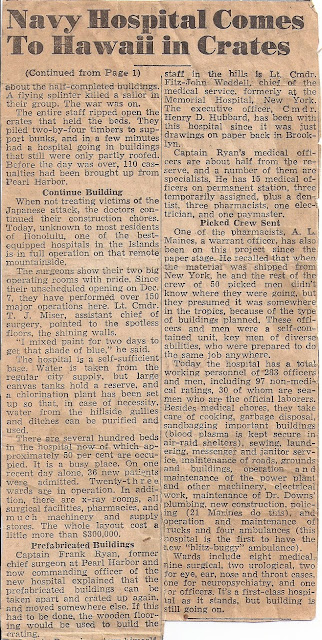