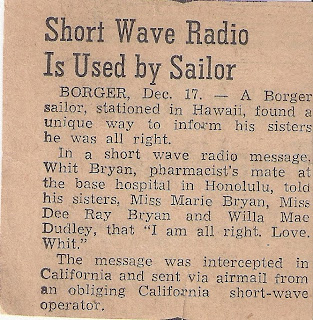 Tomorrow is Pearl Harbor Remembrance Day. It will be 72 years since the bombing of Pearl Harbor.

My father, Whit Criswell Bryan was assigned to the U.S. Naval Mobile Hospital No. 2 on December 1, 1941.

The hospital, which had arrived at Pearl Harbor in crates on November 26, 1941, was assembled by medial staff in sugar cane fields overlooking the harbor. Much of it was still in crates when the attack occurred on December 7.

Dad told me that only the sleeping quarters for those assigned to the mobile hospital had been completed and that while patients slept in the quarters, corpsmen and other personnel slept in trenches.

Check out the links below to see my previous Pearl Harbor posts.

Photographs and newspaper clippings from the collection of Diana Bryan Quinn.
Posted by Diana at 12:03 AM