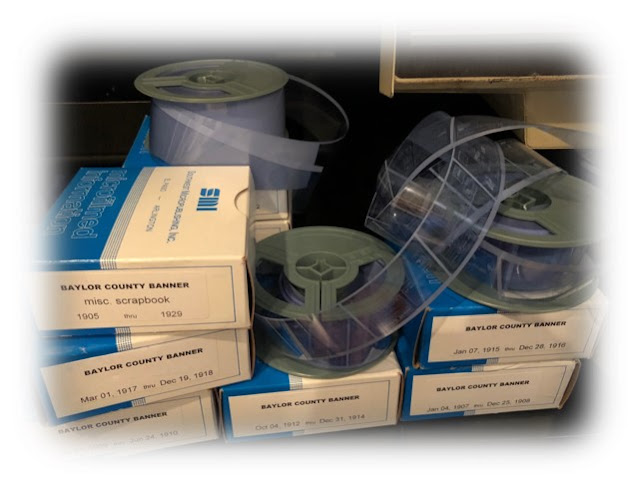 This is post #40 of #52ancestors. I am a little behind as I have not yet posted #38 (new information about the Giddens store in Phillipsburg) and #39 (Terrell Bryan and the Poor Farm).  They will be up soon.

Post #40's writing prompt was 10 so I decided to post my transcriptions of the 1910 issues of the Baylor County Banner, a newspaper published in Seymour, Texas.

In 1920, my father was born in Baylor County, his siblings spent most of their childhood there, and his maternal grandparents and his parents died in Baylor County before 1930. One of the few ways to learn about Dad's family has been through old newspapers.

I originally obtained copies of the Banner on microfilm through interlibrary loan from the Texas State Archives and Library. I was spending so much time at my local library viewing the films I finally purchased my own and was able to view the films at home on an old microfiche machine purchased on e-bay. 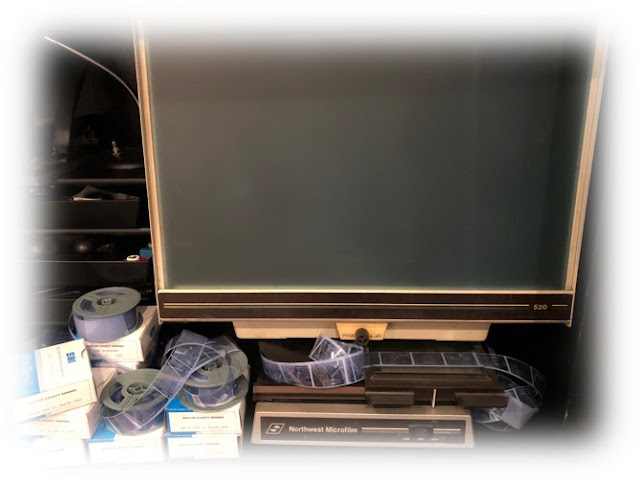 I began posting my transcriptions onto a Rootsweb website in 2006.  I transcribed articles or parts of articles containing information about my family and extended families. I also made note of all births, marriages, and deaths of all Baylor County families.  I have transcribed many issues available from 1905 to 1920 as well as parts of a scrapbook found in the library in Seymour with many clippings from the 1930s and 1940s. You can see this information on my old web pages by clicking on this link.

HOWEVER, I no longer see a reason to transcribe additional issues of the Banner. Many of the issues can be searched at The Portal to Texas History (FREE) or for a fee at NEWSPAPER ARCHIVES.com.

Transcriptions from The Baylor County Banner - 1910

These transcriptions are from the Baylor County Banner issues dating from January 14, 1910 to June 24, 1910.

* indicates that the entire article is included in the notes below.

Terrell Hammett came Dec. 31 from Oklahoma to attend the bedside of his younger brother, Howell, who is very sick with dropsy. *

D. T. Gleghorn, on E. B. Fuller’s place, paid his subscription the other day and says he is not kicking about the way his crop turned out the past year.  He had in 70 acres of cotton and gathered 23 bales.  He sold it for an average of 14 cents, three bales brought 15 cents which together with the seed would make $85 per bale or about $2,000 for the crop.  I wouldn’t kick either.*

Bomarton News - Homer Cox Dead  -  Homer Cox died Friday night at the home of his sister-in-law, Mrs. Jno. Y. Elliott, with heart trouble.  He had not been sick enough to take to his bed.  His father, T. A. Cox and brother, Paul Cox both live here. Another brother and Prof. Tibbett came up from Alvord to attend the funeral Sunday. Prof. Tibbett spoke a few appropriate words at the grave.  Deceased was 23 years of age. *

Levelview - Tom Cox’s little boy has been sick with cold.

How many of us are lucky enough to find a bio of family in the newspaper? This is my grandfather, Redic Eli Bryan.

For Assessor
By referring to the announcement column it will be seen that the name of Redic E. Bryan appears there as a candidate for the office of Tax Assessor.  As he is not thoroughly known to our people it might be well to give something of his biography.  Mr. Bryan was born in Louisiana but moved to Texas and to Erath County with his parents when he was only eight years of age.  He attended a good school at Stephenville and upon completion of his school days he acquired a first-grade certificate and taught for five years in that county.

Five years ago he moved with his family to Baylor county and settled on a farm in Levelview community, northwest of town.  He has been living there ever since, except a period of eighteen months when he was at Big Springs for his wife’s health.  His life in our midst has been an exemplary one and he has earned the high regard of the people with whom he has been associated.

Mr. Bryan is forty years of age and is in the prime of his usefulness.  He is a robust, vigorous man, fully capable physically to cope with the cares of office.  He has also had the training that would fit him for the position he seeks.  That he is perfectly honest and trustworthy is not to be doubted for an instant.  He will refer you to anybody that knew him where he came from or who has known him here as to his character.

Being thus qualified, Mr. Bryan believes he can serve the people in the capacity of assessor to their entire satisfaction.  And no effort will be spared on his part in case he is elected, to make of himself a good officer.  He is determined that his race will be a perfectly clean one.  He has not a word to say against his opponent, whom he believes to be a good and capable man.  But he believes in rotation of office and believes that all public favors should not be given one man, no matter how good that man may be.

Mr. Bryan is at some disadvantage in not knowing everybody, but he intends to make a thorough canvas and will try if possible to meet you before the July primary.  He asks for a careful consideration of his candidacy on the part of the voter.  Mr. Bryan is a good man and qualified for the office he seeks.  If the voters of our county should feel constrained to give him their ballot it is safe to say they would have no great cause to regret their action. * 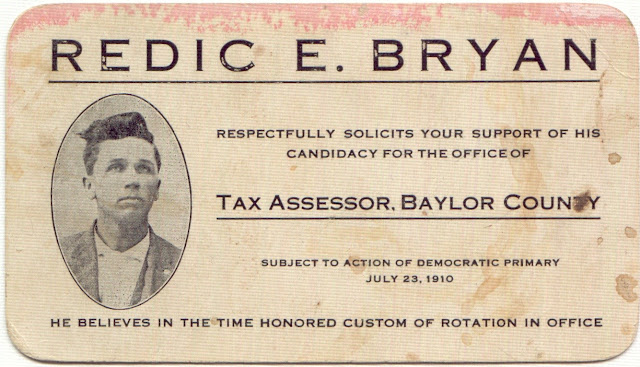 Dear Sirs: - I notice from the columns of your valuable paper that R. E. Bryan, who formerly lived in this county, (Erath) is a Candidate for Tax Assessor of Baylor County, and I take this opportunity to say a few words in his behalf.  Mr. Bryan lived for many years in this county., and I knew him intimately and well. He is an energetic, forceful man of strong convictions and rugged honesty.  He his also an man of largely  {paper torn} than average ability.  He taught school for five years in this county and was counted one of our best teachers. He is a conservative man, but with an open and liberal mind; in short he is a type of that hustling energetic honest young man that is making this one of the greatest periods in the world’s history.  And while I have no desire to be officious yet I cannot refrain from giving my commendation to Mr. Bryan, and predicting that if the people of your county see fit to elect him to the office named, that he will give them one of the best administrations the county has ever had.  W. H. Frey, President Farmers Nat. Bank

The stork visited the home of Mr. and Mrs. Tom Cox the night of the third and left in their care an 11 ½  pound boy.  Mother and son are doing well.

R. E. Bryan says a fine girl arrived at his home Saturday night.  He thinks this will cause a number of young fellows to {paper torn} Note: This was the birth announcement for the Bryan’s fourth child Willie May aka Willa Mae Bryan.

Levelview - The stork visited the home of Mr. and Mrs. R. E. Bryan Saturday night, the 16th and left in their care a little Miss Bryan.

Levelview -   The fruit supper at Mr. Hammett’s last Friday was well attended and everyone seemed to enjoy themselves.  It was given in honor of Terrell Hammett on his 20th birthday.

Mabelle  - Sheriff E. L. Craddock was seen in our community Thursday also J. B. Self and R. E. Bryan.

Ample - J. M. Thomas of Seymour and Redick E. Bryan of Levelview, both candidates and friends of Prof. C. S. Bowles, made his school at Corn a visit last week and both gentlemen favored the school with an interesting address.

England - R. E. Bryan, candidate for assessor was out this way last week.

Levelview - R. E. Bryan and A. B. Hawkins  made a flying trip to Mule Creek Sunday.

Grandma Scott Dies
Sunday morning, May 8 at 4 o’clock Grandma M. A. Scott breathed her last.  She had been sick for a long time with kidney trouble and for several months had been gradually growing worse.  Anticipating the end, her children had all been here to visit her and all but one were present when she died.  The funeral took place at the residence on Sunday afternoon at 4 o’clock. Her pastor, Rev. O. E. Clark, conducted the services. A long procession of sorrowing relatives and friends followed the remains to the cemetery.

Grandma Scott died at the advanced age of 80 years and was the last one of nine children. She moved to Baylor County in 1879, being one of the first settlers, and lived a few years at Round Timber, after which she moved to Seymour.  During her long residence here, she has won the love and esteem of all those who have known her.  She had become a familiar figure in the town and her presence will be sadly missed.  For sixty years Mrs. Scott has been a faithful member of the Baptist church.  Her life has been an exemplary one and she could lie down in death without fear or trembling.

Deceased leaves six children:  Ben Scott and Mrs. J. S. Foster of this place, J. G. Scott of Tahoka, Holly Scott of Roosevelt, Okla., Mrs. Reeder of Knox City, and Mrs. N. A. Green of Estelline.  People of Seymour join those in sorrow for the death of this good woman.  We have this consolation, though, that she had more than lived out her period of years and so lived that her memory will be revered

Levelview - J. R. Hammett returned home from Louisiana last Thursday where he went to visit his mother (this was community news written on May 16)

J. E. Biggs of Stephenville was here the past week and closed a deal with the Red Springs people to teach in the school there next term.  Mr. Biggs holds a certificate from the Denton Normal and seems to be a man of ability.  Red Springs school has grown to ample proportions and will have three teachers this time.  The term will begin in August and vacation will be taken in November and December for cotton picking.

Levelview - R. E. Bryan’s baby is on the sick list.

Levelview - R. E. Bryan’s baby is slowly recovering.  This would be Willa Mae.