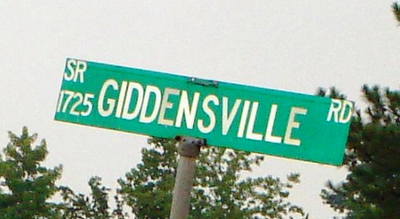 
Although an unincorporated community can have a post office and be recognized as an acceptable place name for use in a mailing address, it does not have a have a governing body that can pass laws, levy taxes, and provide services. An unincorporated community is usually a group of people who live in and around a certain area and form a town.
The first mention of the town of Giddensville, in my research of deeds, business directories, and miscellaneous records, was in 1871.  However, as early as 1863, brothers, George L. Giddens and John W. Giddens owned land and businesses in the area later known as Giddensville.
August 18, 1863 - George sold 100.5 acres to James M. Lewis for $2050 (probably Confederate currency). The land is described as “a parcel of land where I now live . . . situated near the road leading from Clinton to Wayne County at the crossroads near J. W. Giddens place of distilling.”

September 5, 1867 - George L. Giddens and Luellen E. Giddens sold 180 acres of land to Nancy Troublefield for $460. This sale included a portion of land at what was called "Giddens or Hugins Corner."

January 9, 1871 - A mortgage for $600 between George and Luellen Giddens and J. L. Stewart on land was described as " Near Giddensville between the home of P. B. Troublefield and the crossroads. On the road between Faison’s Depot and Giddensville.”

April 8, 1878  -  George L. and Luellen E. Giddens sold land to Henry Faison "on the road that leads from Giddensville to Faison's Depot and meets P. B. Troublefield's line."

March 10, 1881 -  Sophia A. Pipkin, sister to George’s wife, Luellen, was the administratrix of her husband’s estate (William R. Pipkin). She was ordered to sell the property by the probate court in order “to make some assets.” George L. Giddens was the last and highest bidder.  The first tract is in Giddensville and was “the store lot” and it ends at the lot formerly called the D. C. Giddens Store.  The second tract is known as the William. R. Pipkin dwelling and was situated in Giddensville. It was on the north side of the King Branch and the east side of the road leading from Clinton to Goldboro.

1883 - George L. Giddens was on the Official Register of the United States as being the Postmaster in Giddensville.

1884 - In Branson's NC Directory, F. A. Clifton and H. J. Hines were listed as store owners in Giddensville.  J H Darden was the physician.

1889 - Charles A. Giddens received $188.95 yearly for serving as Postmaster of Giddensville.  His father, George L. Giddens, was the Postmaster at Faison where he received $464.77 yearly.

1890 - Giddensville had a population of twenty-five.  F. A. Clifton, G. L. Giddens, H. J. Hines, and Alonzo Thompson were owners of stores in Giddensville.   J. H. Darden was the town’s physician.

June 30, 1896 - Monroe Carson Giddens, of Giddensville, was listed, on a report of the commissioner of IRS as a distiller and/or owner of a distillery warehouse where spirits were kept.

It doesn’t appear that Giddensville was named for one person and it is unknown who first dubbed this area Giddensville. More deed research might answer this question and, one other question - How did George L. and John W. Giddens obtain all that land in Giddensville?

Thank you to George Giddens for allowing me to use his Facebook profile picture of the Giddensville sign.